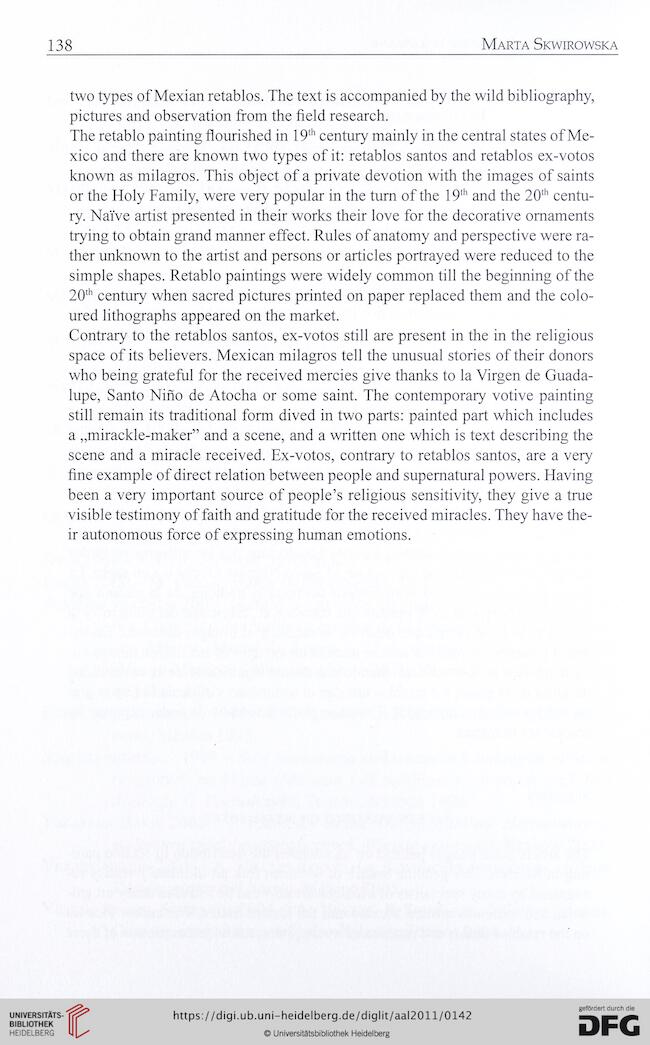 two types of Mexian retablos. The text is accompanied by the wild bibliography,
pictures and observation from the field research.
The retablo painting flourished in 19th century mainly in the central states of Me-
xico and there are known two types of it: retablos santos and retablos ex-votos
known as milagros. This object of a private devotion with the images of saints
or the Holy Family, were very popular in the turn of the 19lh and the 20th centu-
ry. Naive artist presented in their works their love for the decorative ornaments
trying to obtain grand manner effect. Rules of anatomy and perspective were ra-
ther unknown to the artist and persons or articles portrayed were reduced to the
simple shapes. Retablo paintings were widely common till the beginning of the
20th century when sacred pictures printed on paper replaced them and the colo-
ured lithographs appeared on the market.
Contrary to the retablos santos, ex-votos still are present in the in the religious
space of its believers. Mexican milagros tell the unusual stories of their donors
who being grateful for the received mercies give thanks to la Virgen de Guada-
lupe, Santo Niño de Atocha or some saint. The contemporary votive painting
still remain its traditional form dived in two parts: painted part which includes
a „mirackle-maker” and a scene, and a written one which is text describing the
scene and a miracle received. Ex-votos, contrary to retablos santos, are a very
fine example of direct relation between people and supernatural powers. Having
been a very important source of people’s religious sensitivity, they give a true
visible testimony of faith and gratitude for the received miracles. They have the-
ir autonomous force of expressing human emotions.