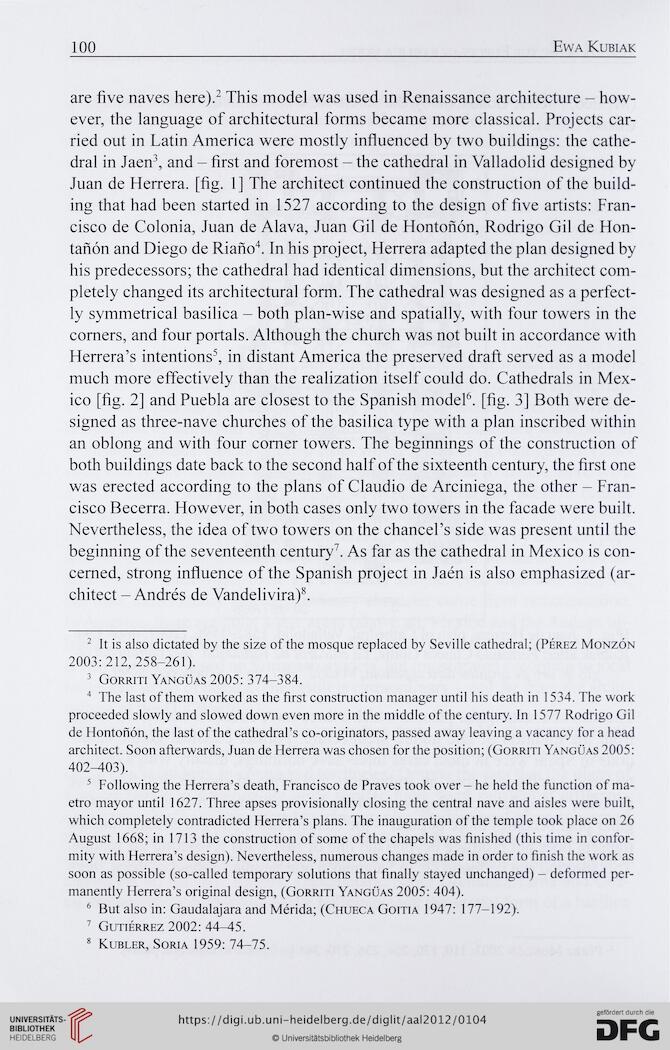 are five naves here).2 This model was used in Renaissance architecture - how-
ever, the language of architectural forms became more classical. Projects car-
ried out in Latin America were mostly influenced by two buildings: the cathe-
dral in Jaen3, and - first and foremost - the cathedral in Valladolid designed by
Juan de Herrera, [fig. 1] The architect continued the construction of the build-
ing that had been started in 1527 according to the design of five artists: Fran-
cisco de Colonia, Juan de Alava, Juan Gil de Hontofíón, Rodrigo Gil de Hon-
tañón and Diego de Riaño4. In his project, Herrera adapted the plan designed by
his predecessors; the cathedral had identical dimensions, but the architect com-
pletely changed its architectural form. The cathedral was designed as a perfect-
ly symmetrical basilica - both plan-wise and spatially, with four towers in the
comers, and four portals. Although the church was not built in accordance with
Herrera’s intentions5, in distant America the preserved draft served as a model
much more effectively than the realization itself could do. Cathedrals in Mex-
ico [fig. 2] and Puebla are closest to the Spanish model6, [fig. 3] Both were de-
signed as three-nave churches of the basilica type with a plan inscribed within
an oblong and with four comer towers. The beginnings of the construction of
both buildings date back to the second half of the sixteenth century, the first one
was erected according to the plans of Claudio de Arciniega, the other - Fran-
cisco Becerra. However, in both cases only two towers in the facade were built.
Nevertheless, the idea of two towers on the chancel’s side was present until the
beginning of the seventeenth century7. As far as the cathedral in Mexico is con-
cerned, strong influence of the Spanish project in Jaén is also emphasized (ar-
chitect - Andrés de Vandelivira)8.

2 It is also dictated by the size of the mosque replaced by Seville cathedral; (Pérez Monzón
2003:212,258-261).
3 Gorriti Yangüas 2005: 374-384.
4 The last of them worked as the first construction manager until his death in 1534. The work
proceeded slowly and slowed down even more in the middle of the century. In 1577 Rodrigo Gil
de Hontoñón, the last of the cathedral’s co-originators, passed away leaving a vacancy for a head
architect. Soon afterwards, Juan de Herrera was chosen for the position; (Gorriti Yangüas 2005:
402-403).
5 Following the Herrera’s death, Francisco de Praves took over - he held the function of ma-
etro mayor until 1627. Three apses provisionally closing the central nave and aisles were built,
which completely contradicted Herrera’s plans. The inauguration of the temple took place on 26
August 1668; in 1713 the construction of some of the chapels was finished (this time in confor-
mity with Herrera’s design). Nevertheless, numerous changes made in order to finish the work as
soon as possible (so-called temporary solutions that finally stayed unchanged) - deformed per-
manently Herrera’s original design, (Gorriti Yangüas 2005: 404).
6 But also in: Gaudalajara and Mérida; (Chueca Goitia 1947: 177-192).
7 Gutiérrez 2002: 44-45.
8 Kubler, Soria 1959: 74-75.