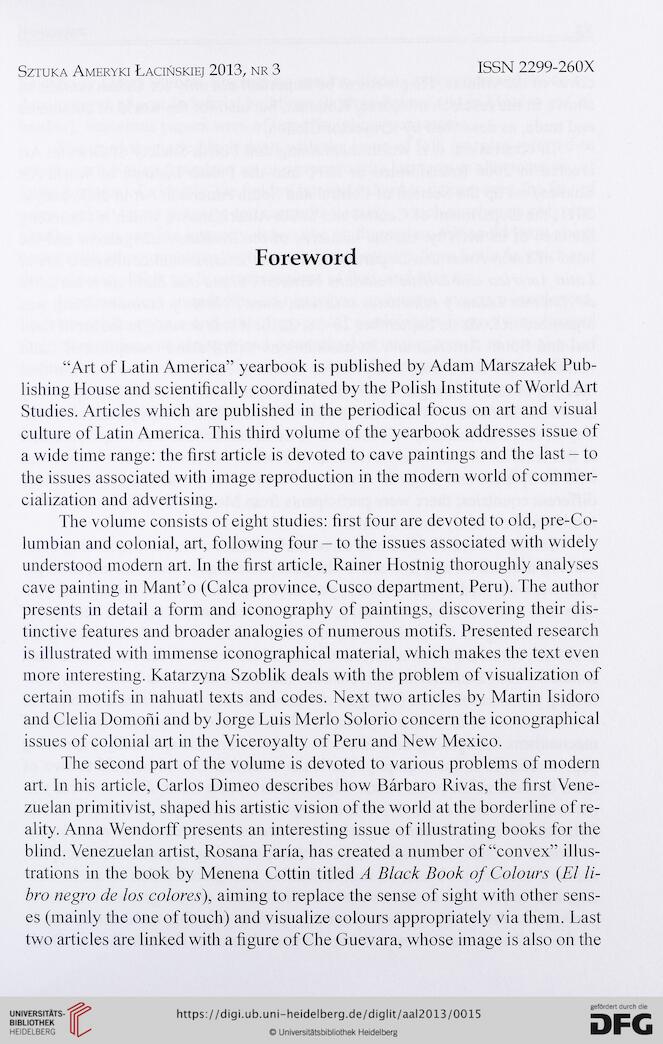 “Art of Latin America” yearbook is published by Adam Marszałek Pub-
lishing House and scientifically coordinated by the Polish Institute of World Art
Studies. Articles which are published in the periodical focus on art and visual
culture of Latin America. This third volume of the yearbook addresses issue of
a wide time range: the first article is devoted to cave paintings and the last — to
the issues associated with image reproduction in the modern world of commer-
cialization and advertising.

The volume consists of eight studies: first four are devoted to old, pre-Co-
lumbian and colonial, art, following four — to the issues associated with widely
understood modern art. In the first article, Rainer Hostnig thoroughly analyses
cave painting in Mant'o (Calca province, Cusco department, Peru). The author
presents in detail a form and iconography of paintings, discovering their dis-
tinctive features and broader analogies of numerous motifs. Presented research
is illustrated with immense iconographical material, which makes the text even
more interesting. Katarzyna Szoblik deals with the problem of visualization of
certain motifs in nahuatl texts and codes. Next two articles by Martin Isidoro
and Clelia Domoñi and by Jorge Luis Merlo Solorio concern the iconographical
issues of colonial art in the Viceroyalty of Peru and New Mexico.

The second part of the volume is devoted to various problems of modern
art. In his article, Carlos Dimeo describes how Barbaro Rivas, the first Vene-
zuelan primitivist, shaped his artistic vision of the world at the borderline of re-
ality. Anna Wendorff presents an interesting issue of illustrating books for the
blind. Venezuelan artist, Rosana Faría, has created a number of “convex” 1llus-
trations in the book by Menena Cottin titled 4 Black Book of Colours (El li-
bro negro de los colores), aiming to replace the sense of sight with other sens-
es (mainly the one of touch) and visualize colours appropriately via them. Last
two articles are linked with a figure of Che Guevara, whose image 1s also on the