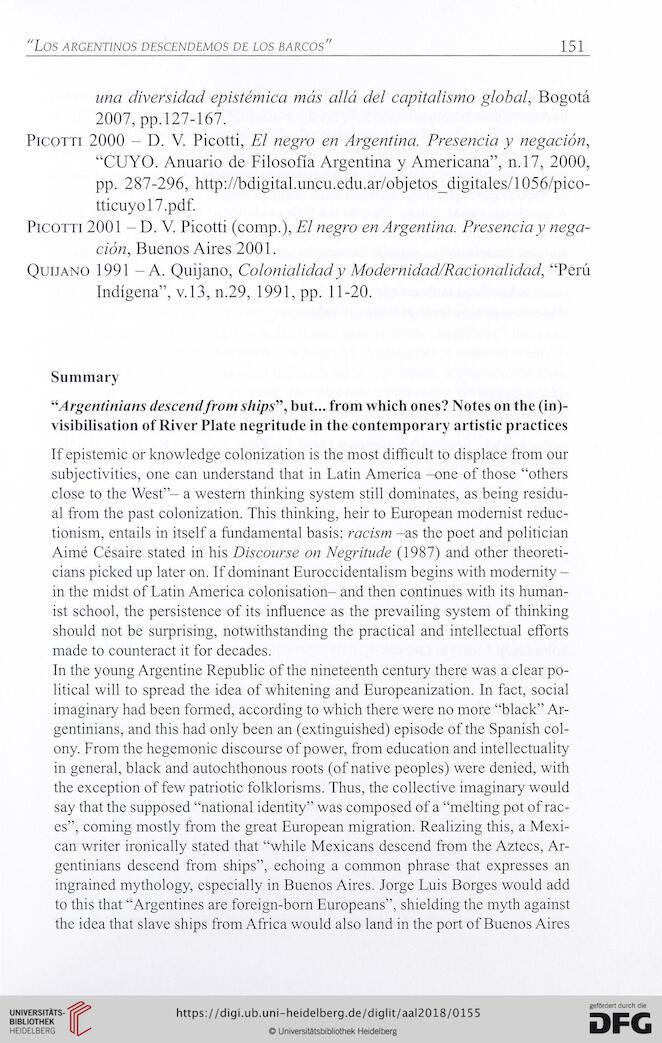 Summary
“Argentinians descendfrom ships”, but... from which ones? Notes on the (in)-
visibilisation of River Plate negritude in the contemporary artistic practices
If epistemic or knowledge colonization is the most difficult to displace from our
subjectivities, one can understand that in Latin America -one of those “others
close to the West”- a western thinking system still dominates, as being residu-
al from the past colonization. This thinking, heir to European modernist reduc-
tionism, entails in itself a fundamental basis: racism -as the poet and politician
Aimé Césaire stated in his Discourse on Negritude (1987) and other theoreti-
cians picked up later on. If dominant Euroccidentalism begins with modernity -
in the midst of Latin America colonisation- and then continues with its human-
ist school, the persistence of its influence as the prevailing system of thinking
should not be surprising, notwithstanding the practical and intellectual efforts
made to counteract it for decades.
In the young Argentine Republic of the nineteenth century there was a clear po-
litical will to spread the idea of whitening and Europeanization. In fact, social
imaginary had been formed, according to which there were no more “black” Ar-
gentinians, and this had only been an (extinguished) episode of the Spanish col-
ony. From the hegemonic discourse of power, from education and intellectuality
in general, black and autochthonous roots (of native peoples) were denied, with
the exception of few patriotic folklorisms. Thus, the collective imaginary would
say that the supposed “national identity” was composed of a “melting pot of rac-
es”, coming mostly from the great European migration. Realizing this, a Mexi-
can writer ironically stated that “while Mexicans descend from the Aztecs, Ar-
gentinians descend from ships”, echoing a common phrase that expresses an
ingrained mythology, especially in Buenos Aires. Jorge Luis Borges would add
to this that “Argentines are foreign-bom Europeans”, shielding the myth against
the idea that slave ships from Africa would also land in the port of Buenos Aires