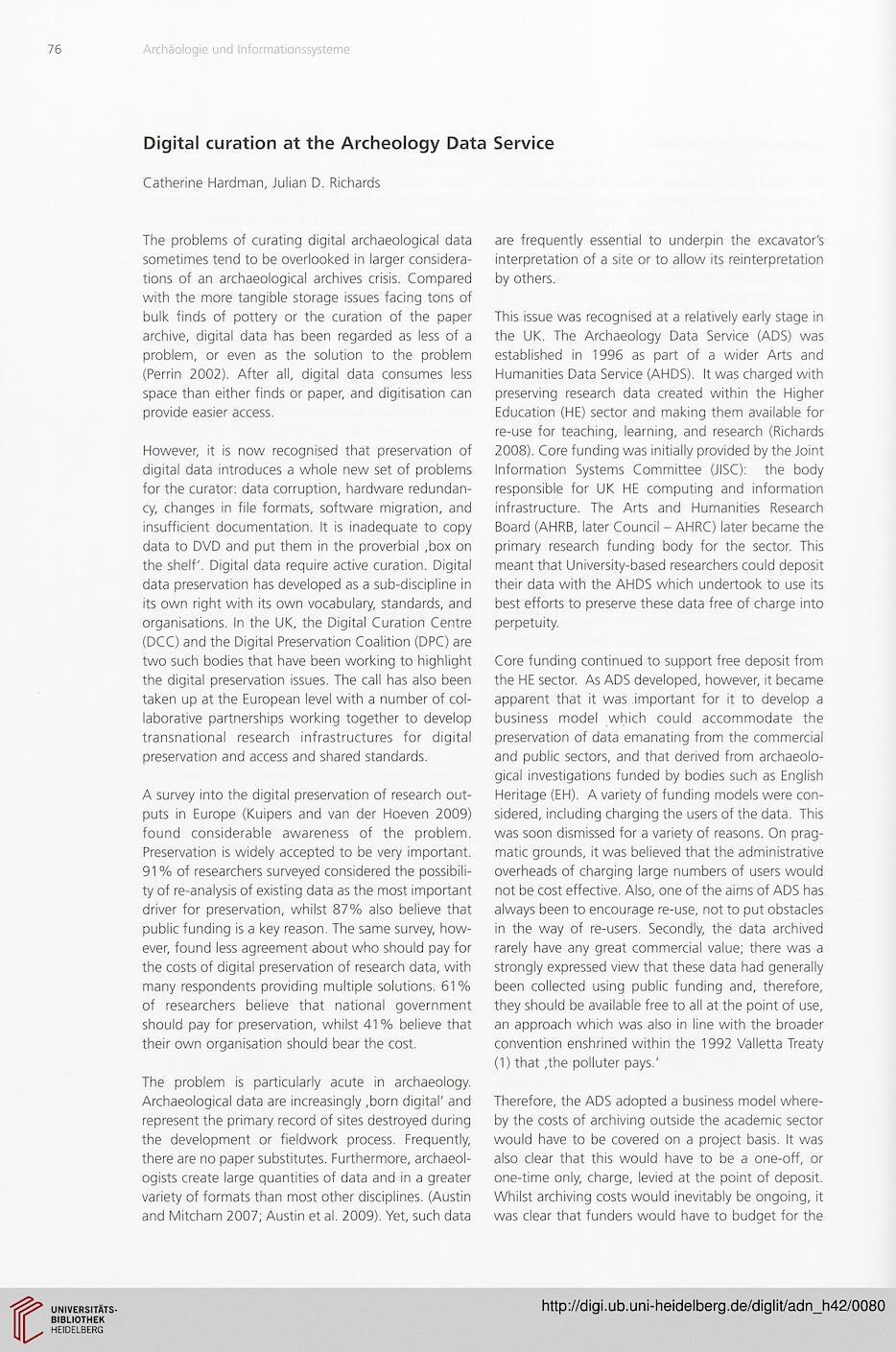 The problems of curating digital archaeological data
sometimes tend to be overlooked in larger considera-
tions of an archaeological archives crisis. Compared
with the more tangible storage issues facing tons of
bulk finds of pottery or the curation of the paper
archive, digital data has been regarded as less of a
Problem, or even as the solution to the problem
(Perrin 2002). After all, digital data consumes less
space than either finds or paper, and digitisation can
provide easier access.
However, it is now recognised that preservation of
digital data introduces a whole new set of problems
for the curator: data corruption, hardware redundan-
cy, changes in file formats, Software migration, and
insufficient documentation. It is inadequate to copy
data to DVD and put them in the proverbial ,box on
the shelf'. Digital data require active curation. Digital
data preservation has developed as a sub-discipline in
its own right with its own vocabulary, Standards, and
organisations. In the UK, the Digital Curation Centre
(DCC) and the Digital Preservation Coalition (DPC) are
two such bodies that have been working to highlight
the digital preservation issues. The call has also been
taken up at the European level with a number of col-
laborative partnerships working together to develop
transnational research infrastructures for digital
preservation and access and shared Standards.
A survey into the digital preservation of research Out-
puts in Europe (Kuipers and van der Hoeven 2009)
found considerable awareness of the problem.
Preservation is widely accepted to be very important.
91% of researchers surveyed considered the possibili-
ty of re-analysis of existing data as the most important
driver for preservation, whilst 87% also believe that
public funding is a key reason. The same survey, how-
ever, found less agreement about who should pay for
the costs of digital preservation of research data, with
many respondents providing multiple Solutions. 61%
of researchers believe that national government
should pay for preservation, whilst 41 % believe that
their own Organisation should bear the cost.
The problem is particularly acute in archaeology.
Archaeological data are increasingly ,born digital' and
represent the primary record of sites destroyed during
the development or fieldwork process. Frequently,
there are no paper substitutes. Furthermore, archaeol-
ogists create large quantities of data and in a greater
variety of formats than most other disciplines. (Austin
and Mitcham 2007; Austin et al. 2009). Yet, such data

are frequently essential to underpin the excavator's
Interpretation of a site or to allow its reinterpretation
by others.
This issue was recognised at a relatively early stage in
the UK. The Archaeology Data Service (ADS) was
established in 1996 as part of a wider Arts and
Humanities Data Service (AHDS). It was charged with
preserving research data created within the Higher
Education (HE) sector and making them available for
re-use for teaching, learning, and research (Richards
2008). Core funding was initially provided by the Joint
Information Systems Committee (JISC): the body
responsible for UK HE computing and Information
infrastructure. The Arts and Humanities Research
Board (AHRB, later Council - AHRC) later became the
primary research funding body for the sector. This
meant that University-based researchers could deposit
their data with the AHDS which undertook to use its
best efforts to preserve these data free of Charge into
perpetuity.
Core funding continued to Support free deposit from
the HE sector. As ADS developed, however, it became
apparent that it was important for it to develop a
business model which could accommodate the
preservation of data emanating from the commercial
and public sectors, and that derived from archaeolo-
gical investigations funded by bodies such as English
Heritage (EH). A variety of funding models were con-
sidered, including charging the users of the data. This
was soon dismissed for a variety of reasons. On prag-
matic grounds, it was believed that the administrative
overheads of charging large numbers of users would
not be cost effective. Also, one of the aims of ADS has
always been to encourage re-use, not to put obstacles
in the way of re-users. Secondly, the data archived
rarely have any great commercial value; there was a
strongly expressed view that these data had generally
been collected using public funding and, therefore,
they should be available free to all at the point of use,
an approach which was also in line with the broader
convention enshrined within the 1992 Valletta Treaty
(1) that ,the polluter pays.'
Therefore, the ADS adopted a business model where-
by the costs of archiving outside the academic sector
would have to be covered on a project basis. It was
also clear that this would have to be a one-off, or
one-time only, Charge, levied at the point of deposit.
Whilst archiving costs would inevitably be ongoing, it
was clear that funders would have to budget for the