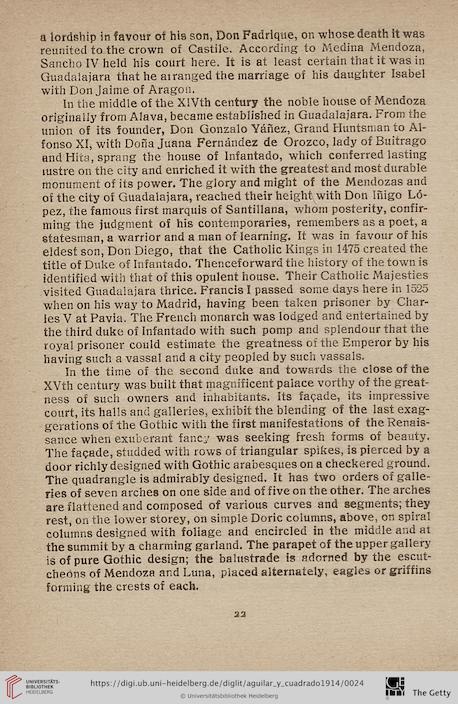 Information about OCR text
a lordship in favour of his son, Don Fadrlque, on whose death It was
reunited to the crown of Castile. According to Medina Mendoza,
Sancho IV held his court here. It is at least certain that it was in
Guadalajara that he airanged the marriage of his daughter Isabel
with Don Jaime of Aragon.
In the middle of the XIVth century the noble house of Mendoza
originally from Alava, became established in Guadalajara. From the
union of its founder, Don Gonzalo Yáñez, Grand Huntsman to Al-
fonso XI, with Doña Juana Fernández de Orozco, lady of Buitrago
and Hita, sprang the house of Infantado, which conferred lasting
lustre on the city and enriched it with the greatest and most durable
monument of its power. The glory and might of the Mendozas and
of the city of Guadalajara, reached their height with Don Iñigo Ló-
pez, the famous first marquis of Santillana, w'hom posterity, confir-
ming the judgment of his contemporaries, remembers as a poet, a
statesman, a warrior and a man of learning. It was in favour of his
eldest son, Don Diego, that the Catholic Kings in 1475 created the
title of Duke of Infantado. Thenceforward the history of the town is
identified with that of this opulent house. Their Catholic Majesties
visited Guadalajara thrice. Francis I passed some days here in 1525
when on his way to Madrid, having been taken prisoner by Char-
les V at Pavia. The French monarch was lodged and entertained by
the third duke of Infantado with such pomp and splendour that the
royal prisoner could estimate the greatness of the Emperor by his
having such a vassal and a city peopled by such vassals.
In the time of the second duke and towards the close of the
XVth century was built that magnificent palace vorthy of the great-
ness of such owners and inhabitants. Its façade, its impressive
court, its halls and galleries, exhibit the blending of the last exag-
gerations of the Gothic with the first manifestations of the Renais-
sance when exuberant fancy was seeking fresh forms of beauty.
The façade, studded with rows of triangular spikes, is pierced by a
door richly designed with Gothic arabesques on a checkered ground.
The quadrangle is admirably designed. It has two orders of galle-
ries of seven arches on one side and of five on the other. The arches
are flattened and composed of various curves and segments; they
rest, on the lower storey, on simple Doric columns, above, on spiral
columns designed with foliage and encircled in the middle and at
the summit by a charming garland. The parapet of the upper gallery
is of pure Gothic design; the balustrade is adorned by the escut-
cheons of Mendoza ar.d Luna, placed alternately, eagles or griffins
forming the crests of each.