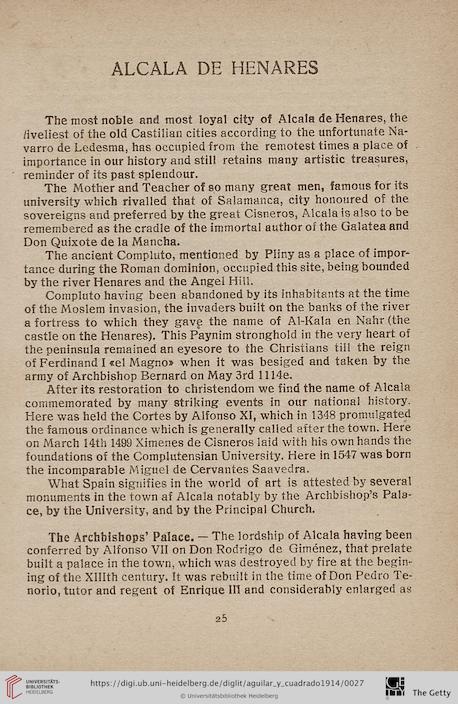 The most noble and most loyal city of Alcala de Henares, the
liveliest of the old Castilian cities according to the unfortunate Na-
varro de Ledesma, has occupied from the remotest times a place of
importance in our history and still retains many artistic treasures,
reminder of its past splendour.
The Mother and Teacher of so many great men, famous for its
university which rivalled that of Salamanca, city honoured of the
sovereigns and preferred by the great Cisneros, Alcala is also to be
remembered as the cradle of the immortal author of the Galatea and
Don Quixote de la Mancha.
The ancient Compluto, mentioned by Pliny as a place of impor-
tance during the Roman dominion, occupied this site, being bounded
by the river Henares and the Angel Hill.
Compluto having been abandoned by its inhabitants at the time
of the Moslem invasion, the invaders built on the banks of the river
a fortress to which they gave the name of Al-Kala en Nahr (the
castle on the Henares). This Paynim stronghold in the very heart of
the peninsula remained an eyesore to the Christians till the reign
of Ferdinand I «el Magno» when it was besiged and taken by the
army of Archbishop Bernard on May 3rd 1114e.
After its restoration to Christendom we find the name of Alcala
commemorated by many striking events in our national history.
Here was held the Cortes by Alfonso XI, which in 1348 promulgated
the famous ordinance which is generally called after the town. Here
on March 14th 1499 Ximenes de Cisneros laid with his own hands the
foundations of the Complutensian University. Here in 1547 was born
the incomparable Miguel de Cervantes Saavedra.
What Spain signifies in the world of art is attested by several
monuments in the town af Alcala notably by the Archbishop’s Pala-
ce, by the University, and by the Principal Church.
The Archbishops’ Palace. — The lordship of Alcala having been
conferred by Alfonso VII on Don Rodrigo de Giménez, that prelate
built a palace in the town, which was destroyed by fire at the begin-
ing of the XIHth century. It was rebuilt in the time of Don Pedro Te-
norio, tutor and regent of Enrique ifl and considerably enlarged as