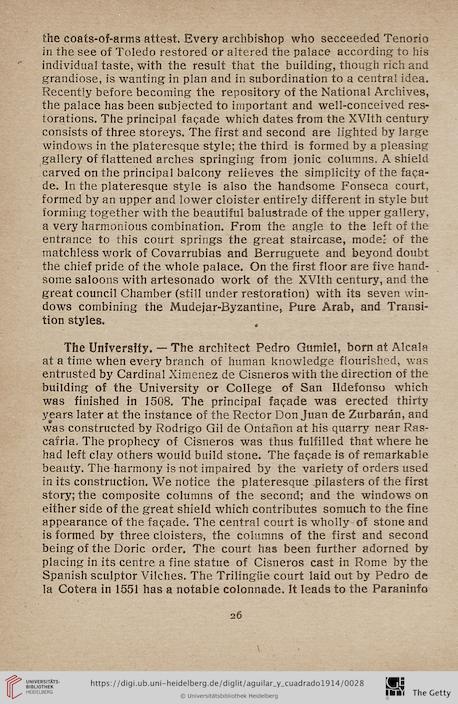 Information about OCR text
the coats-ol-arms attest. Every archbishop who secceeded Tenorio
in the see of Toledo restored or altered the palace according to his
individual taste, with the result that the building, though rich and
grandiose, is wanting in plan and in subordination to a central idea.
Recently before becoming the repository of the National Archives,
the palace has been subjected to important and well-conceived res-
torations. The principal façade which dates from the XVIth century
consists of three storeys. The first and second are lighted by large
windows in the plateresque style; the third is formed by a pleasing
gallery of flattened arches springing from jonic columns. A shield
carved on the principal balcony relieves the simplicity of the faça-
de. In the plateresque style is also the handsome Fonseca court,
formed by an upper and lower cloister entirely different in style but
forming together with the beautiful balustrade of the upper gallery,
a very harmonious combination. From the angle to the left of the
entrance to this court springs the great staircase, mode- of the
matchless work of Covarrubias and Berruguete and beyond doubt
the chief pride of the whole palace. On the first floor are five hand-
some saloons with artesonado work of the XVIth century, and the
great council Chamber (still under restoration) with its seven win-
dows combining the Mudejar-Byzantine, Pure Arab, and Transi-
tion styles. ,
The University. — The architect Pedro Gumiel, bom at Alcala
at a time when every branch of human knowledge flourished, was
entrusted by Cardinal Ximenez de Cisneros with the direction of the
building of the University or College of San Ildefonso which
was finished in 1508. The principal façade was erected thirty
years later at the instance of the Rector Don Juan de Zurbarán, and
was constructed by Rodrigo Gil de Ontañon at his quarry near Ras-
cafria. The prophecy of Cisneros was thus fulfilled that where he
had left clay others would build stone. The façade is of remarkable
beauty. The harmony is not impaired by the variety of orders used
in its construction. We notice the plateresque pilasters of the first
story; the composite columns of the second; and the windows on
either side of the great shield which contributes somuch to the fine
appearance of the façade. The central court is wholly of stone and
is formed by three cloisters, the columns of the first and second
being of the Doric order. The court has been further adorned by
placing in its centre a fine statue of Cisneros cast in Rome by the
Spanish sculptor Vilches. The Trilingiie court laid out by Pedro de
la Cotera in 1551 has a notable colonnade. It leads to the Paraninfo