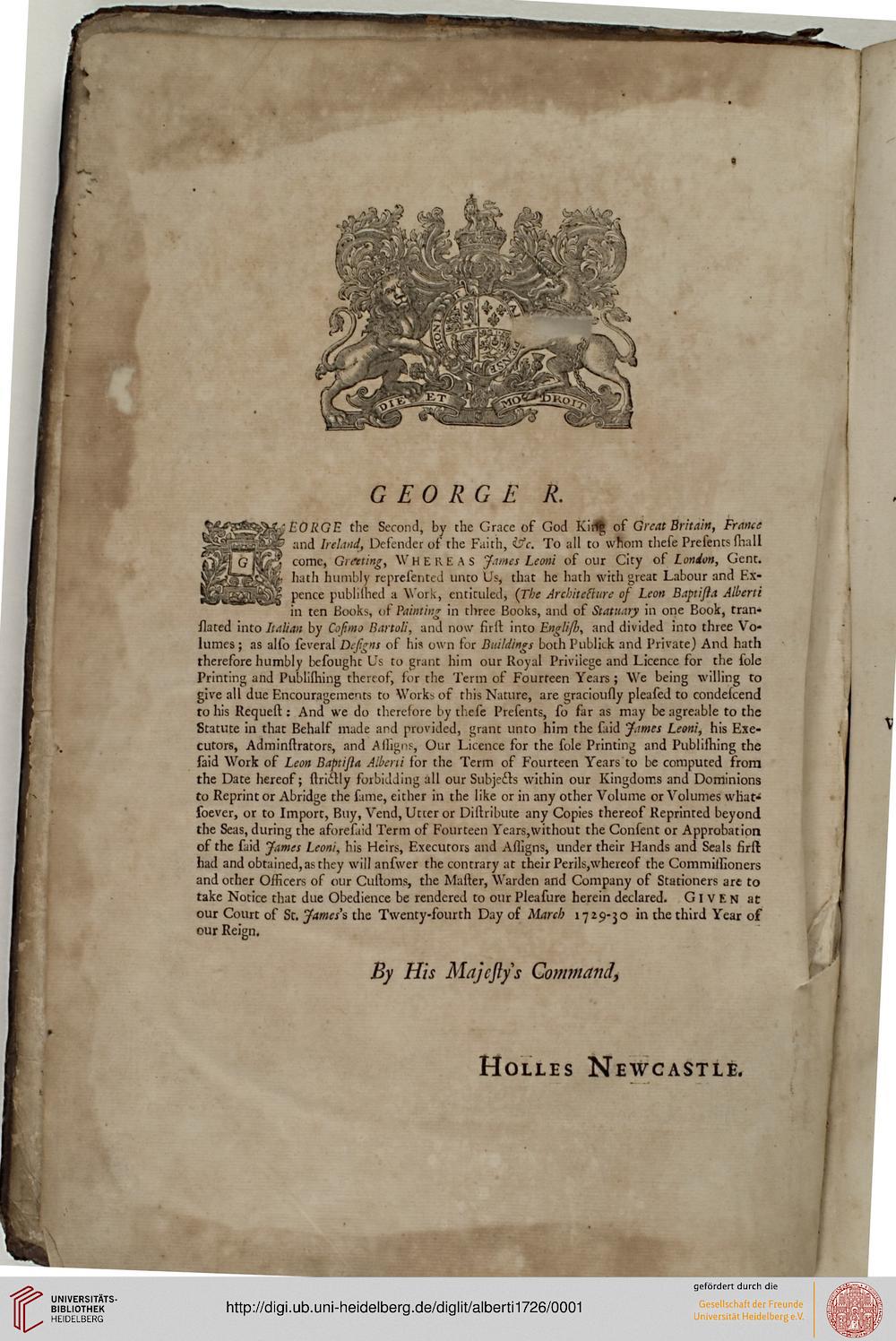 
GEORGE R.
■BORGE the Second, by the Grace of God Kirs of Great Britain, Frame
and Ireland, Desender of the Faith, i$c. To all to whom these Presents shall
come, Greeting, WHEREAS James Leoni of our City of London, Gent,
hath humbly represented unto L's, that he hath with great Labour and F.x-
pence pubhihed a Work, entituled, {The Architecture os Leon Baptijìa Alberti
ten Books, of Painting in three Books, and of Statuary in one Book, tran-
slated into Italian by Cofano Bartoli, and now rirlt into Englissj, and divided into three Vo-
lumes ; as also several Dejigns of his own for Buildings both Publick and Private) And hath
therefore humbly be sought Us to grant him our Royal Priviiege and Licence for the sole
Printing and Publithing thereof, for the Term of Fourteen Years ; We being willing to
give all due Encouragements to Works of this Nature, are graciously pleased to condescend
to his Rcquest : And we do theresore by these Presents, so far as may be agreable to the
Statute in that Behalf made and provided, grant unto him the said James Leoni, his Exe-
cutors, Adminslrators, and Aligns, Our Licence for the sole Printing and Publilhing the
said Work of Leon Baptijìa Alieni sor the Term of Fourteen Years to be computed from
the Date hereof; (Iriflly forbidding all our Subjects within our Kingdoms and Dominions
to Reprint or Abridge the same, either in the like or in any other Volume or Volumes wliat-
soever, or to Import, Buy, Vend, Uucr or Dillnbute any Copies thereof Reprinted beyond
the Seas, during the aforesaid Term of Fourteen Years,without the Consent or Approbation
of the said James Leoni, bis Heirs, Executors and Assjgns, under their Hands and Seals firlt
had and obtained, as they will answer the contrary at their Perils,whereof the Commiihoners
and other Officers of our Customs, the Mailer, Warden and Company of Stationers are to
take Notice that due Obedience be rendered to our Pleasure herein declared. Given at
our Court of St. James's the Twenty-fourth Day of March 1729-30 in the third Year os
our Reign.