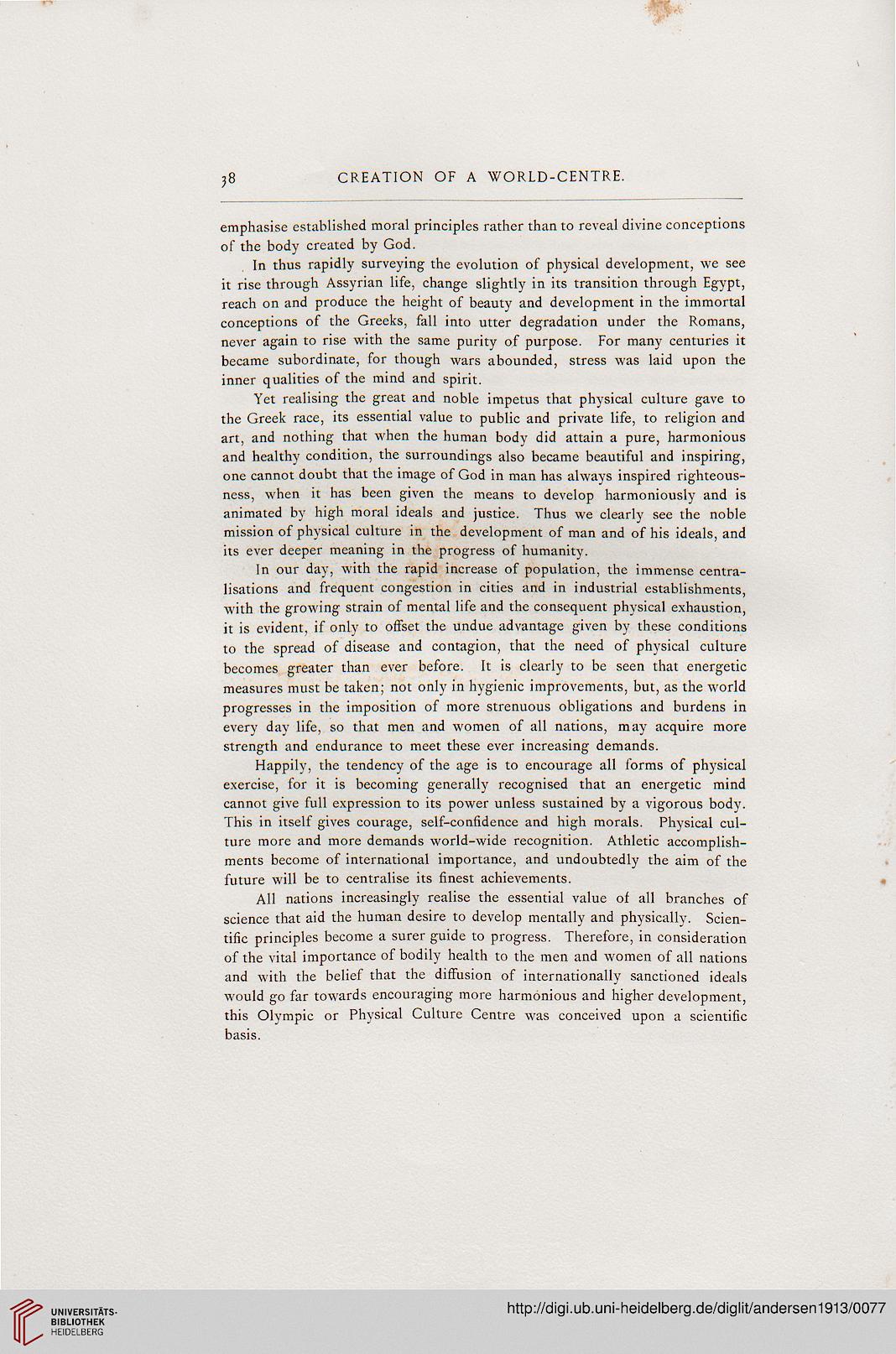 emphasise established moral principles rather than to reveal divine conceptions
of the body created by God.

In thus rapidly surveying the evolution of physical development, we see
it rise through Assyrian life, change slightly in its transition through Egypt,
reach on and produce the height of beauty and development in the immortal
conceptions of the Greeks, fall into utter degradation under the Romans,
never again to rise with the same purity of purpose. For many centuries it
became subordinate, for though wars abounded, stress was laid upon the
inner qualities of the mind and spirit.

Yet realising the great and noble impetus that physical culture gave to
the Greek race, its essential value to public and private life, to religion and
art, and nothing that when the human body did attain a pure, harmonious
and healthy condition, the surroundings also became beautiful and inspiring,
one cannot doubt that the image of God in man has always inspired righteous-
ness, when it has been given the means to develop harmoniously and is
animated by high moral ideals and justice. Thus we clearly see the noble
mission of physical culture in the development of man and of his ideals, and
its ever deeper meaning in the progress of humanity.

In our day, with the rapid increase of population, the immense centra-
lisations and frequent congestion in cities and in industrial establishments,
with the growing strain of mental life and the consequent physical exhaustion,
it is evident, if only to offset the undue advantage given by these conditions
to the spread of disease and contagion, that the need of physical culture
becomes greater than ever before. It is clearly to be seen that energetic
measures must be taken; not only in hygienic improvements, but, as the world
progresses in the imposition of more strenuous obligations and burdens in
every day life, so that men and women of all nations, may acquire more
strength and endurance to meet these ever increasing demands.

Happily, the tendency of the age is to encourage all forms of physical
exercise, for it is becoming generally recognised that an energetic mind
cannot give full expression to its power unless sustained by a vigorous body.
This in itself gives courage, self-confidence and high morals. Physical cul-
ture more and more demands world-wide recognition. Athletic accomplish-
ments become of international importance, and undoubtedly the aim of the
future will be to centralise its finest achievements.

All nations increasingly realise the essential value of all branches of
science that aid the human desire to develop mentally and physically. Scien-
tific principles become a surer guide to progress. Therefore, in consideration
of the vital importance of bodily health to the men and women of all nations
and with the belief that the diffusion of internationally sanctioned ideals
would go far towards encouraging more harmonious and higher development,
this Olympic or Physical Culture Centre was conceived upon a scientific
basis.