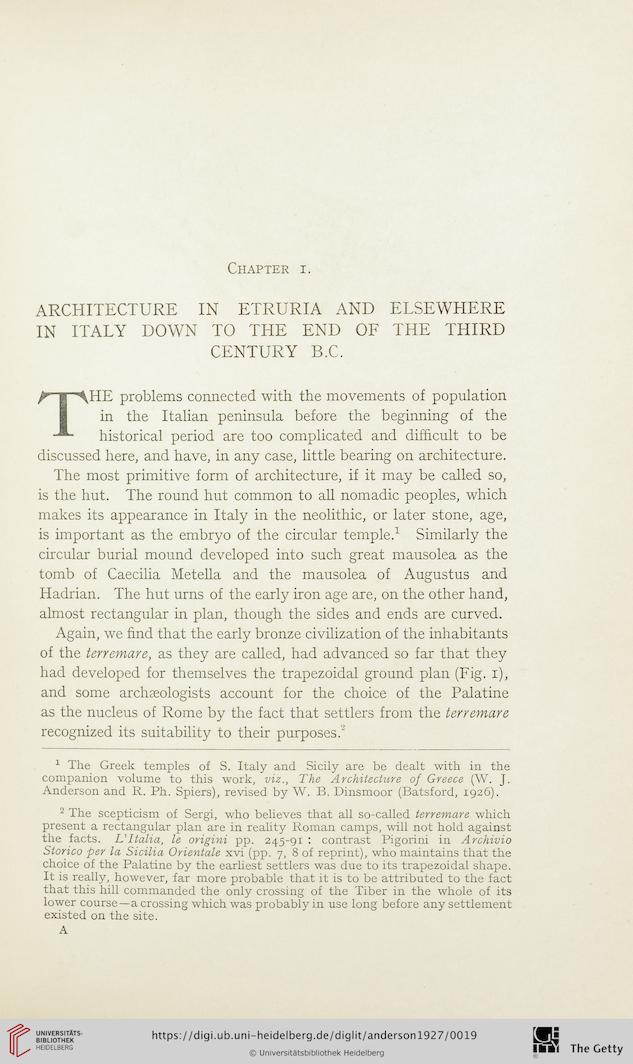 Information about OCR text
Chapter i.
ARCHITECTURE IN ETRURIA AND ELSEWHERE
IN ITALY DOWN TO THE END OF THE THIRD
CENTURY B.C.
THE problems connected with the movements of population
in the Italian peninsula before the beginning of the
historical period are too complicated and difficult to be
discussed here, and have, in any case, little bearing on architecture.
The most primitive form of architecture, if it may be called so,
is the hut. The round hut common to all nomadic peoples, which
makes its appearance in Italy in the neolithic, or later stone, age,
is important as the embryo of the circular temple.1 Similarly the
circular burial mound developed into such great mausolea as the
tomb of Caecilia Metella and the mausolea of Augustus and
Hadrian. The hut urns of the early iron age are, on the other hand,
almost rectangular in plan, though the sides and ends are curved.
Again, we find that the early bronze civilization of the inhabitants
of the terremare, as they are called, had advanced so far that they
had developed for themselves the trapezoidal ground plan (Fig. i),
and some archaeologists account for the choice of the Palatine
as the nucleus of Rome by the fact that settlers from the terremare
recognized its suitability to their purposes.2

1 The Greek temples of S. Italy and Sicily are be dealt with in the
companion volume to this work, viz., The Architecture of Greece (W. J.
Anderson and R. Ph. Spiers), revised by W. B. Dinsmoor (Batsford, 1926).
2 The scepticism of Sergi, who believes that all so-called terremare which
present a rectangular plan are in reality Roman camps, will not hold against
the facts. LTtalia, le origini pp. 245-91 : contrast Pigorini in Archivio
Storico per la Sicilia Orientale xvi (pp. 7, 8 of reprint), who maintains that the
choice of the Palatine by the earliest settlers was due to its trapezoidal shape.
It is really, however, far more probable that it is to be attributed to the fact
that this hill commanded the only crossing of the Tiber in the whole of its
lower course —a crossing which was probably in use long before any settlement
existed on the site.
A