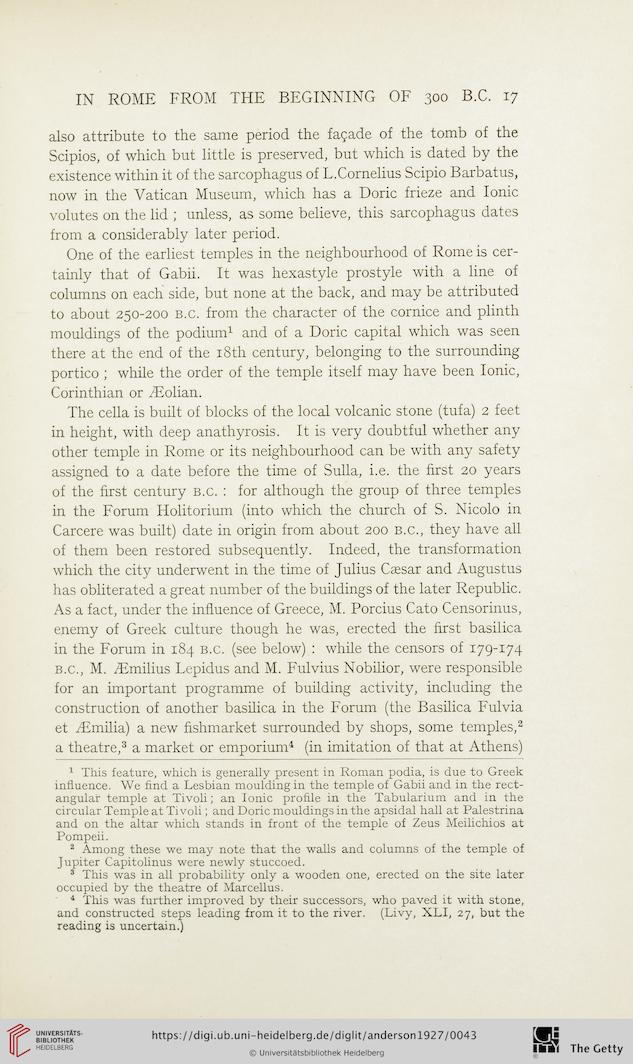 Information about OCR text
IN ROME FROM THE BEGINNING OF 300 B.C. 17

also attribute to the same period the fagade of the tomb of the
Scipios, of which but little is preserved, but which is dated by the
existence within it of the sarcophagus of L.Cornelius Scipio Barbatus,
now in the Vatican Museum, which has a Doric frieze and Ionic
volutes on the lid ; unless, as some believe, this sarcophagus dates
from a considerably later period.
One of the earliest temples in the neighbourhood of Rome is cer-
tainly that of Gabii. It was hexastyle prostyle with a line of
columns on each side, but none at the back, and may be attributed
to about 250-200 b.c. from the character of the cornice and plinth
mouldings of the podium1 and of a Doric capital which was seen
there at the end of the 18th century, belonging to the surrounding
portico ; while the order of the temple itself may have been Ionic,
Corinthian or TEolian.
The cella is built of blocks of the local volcanic stone (tufa) 2 feet
in height, with deep anathyrosis. It is very doubtful whether any
other temple in Rome or its neighbourhood can be with any safety
assigned to a date before the time of Sulla, i.e. the first 20 years
of the first century b.c. : for although the group of three temples
in the Forum Holitorium (into which the church of S. Nicolo in
Carcere was built) date in origin from about 200 b.c., they have all
of them been restored subsequently. Indeed, the transformation
which the city underwent in the time of Julius Caesar and Augustus
has obliterated a great number of the buildings of the later Republic.
As a fact, under the influence of Greece, M. Porcius Cato Censorinus,
enemy of Greek culture though he was, erected the first basilica
in the Forum in 184 b.c. (see below) : while the censors of 179-174
b.c., M. Aimilius Lepidus and M. Fulvius Nobilior, were responsible
for an important programme of building activity, including the
construction of another basilica in the Forum (the Basilica Fulvia
et ZEmilia) a new fishmarket surrounded by shops, some temples,2
a theatre,3 a market or emporium4 (in imitation of that at Athens)
1 This feature, which is generally present in Roman podia, is due to Greek
influence. We find a Lesbian moulding in the temple of Gabii and in the rect-
angular temple at Tivoli; an Ionic profile in the Tabularium and in the
circular Temple at Tivoli; and Doric mouldings in the apsidal hall at Palestrina
and on the altar which stands in front of the temple of Zeus Meilichios at
Pompeii.
2 Among these we may note that the walls and columns of the temple of
Jupiter Capitolinus were newly stuccoed.
3 This was in all probability only a wooden one, erected on the site later
occupied by the theatre of Marcellus.
4 This was further improved by their successors, who paved it with stone,
and constructed steps leading from it to the river. (Livy, XLI, 27, but the
reading is uncertain.)