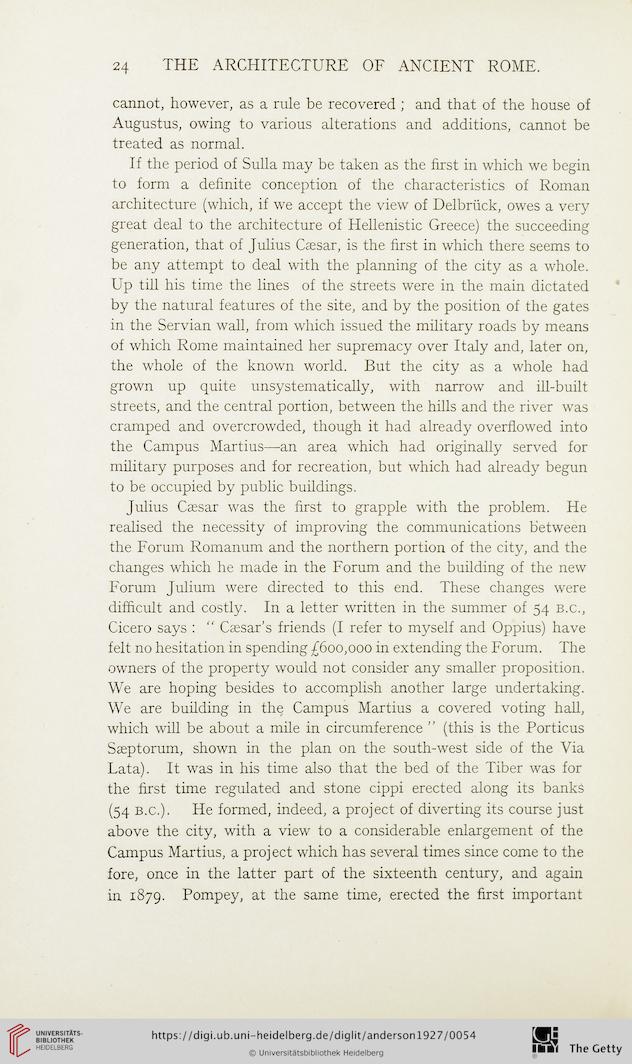 Information about OCR text
24 THE ARCHITECTURE OF ANCIENT ROME.

cannot, however, as a rule be recovered ; and that of the house of
Augustus, owing to various alterations and additions, cannot be
treated as normal.
If the period of Sulla may be taken as the first in which we begin
to form a definite conception of the characteristics of Roman
architecture (which, if we accept the view of Delbruck, owes a very
great deal to the architecture of Hellenistic Greece) the succeeding
generation, that of Julius Caesar, is the first in which there seems to
be any attempt to deal with the planning of the city as a whole.
Up till his time the lines of the streets were in the main dictated
by the natural features of the site, and by the position of the gates
in the Servian wall, from which issued the military roads by means
of which Rome maintained her supremacy over Italy and, later on,
the whole of the known world. But the city as a whole had
grown up quite unsystematically, with narrow and ill-built
streets, and the central portion, between the hills and the river was
cramped and overcrowded, though it had already overflowed into
the Campus Martius—an area which had originally served for
military purposes and for recreation, but which had already begun
to be occupied by public buildings.
Julius Caesar was the first to grapple with the problem. He
realised the necessity of improving the communications between
the Forum Romanum and the northern portion of the city, and the
changes which he made in the Forum and the building of the new
Forum Julium were directed to this end. These changes were
difficult and costly. In a letter written in the summer of 54 B.C.,
Cicero says : “ Caesar’s friends (I refer to myself and Oppius) have
felt no hesitation in spending £600,000 in extending the Forum. The
owners of the property would not consider any smaller proposition.
We are hoping besides to accomplish another large undertaking.
We are building in the Campus Martius a covered voting hall,
which will be about a mile in circumference ” (this is the Porticus
Saeptorum, shown in the plan on the south-west side of the Via
Lata). It was in his time also that the bed of the Tiber was for
the first time regulated and stone cippi erected along its banks
(54 b.c.). He formed, indeed, a project of diverting its course just
above the city, with a view to a considerable enlargement of the
Campus Martius, a project which has several times since come to the
fore, once in the latter part of the sixteenth century, and again
in 1879. Pompey, at the same time, erected the first important