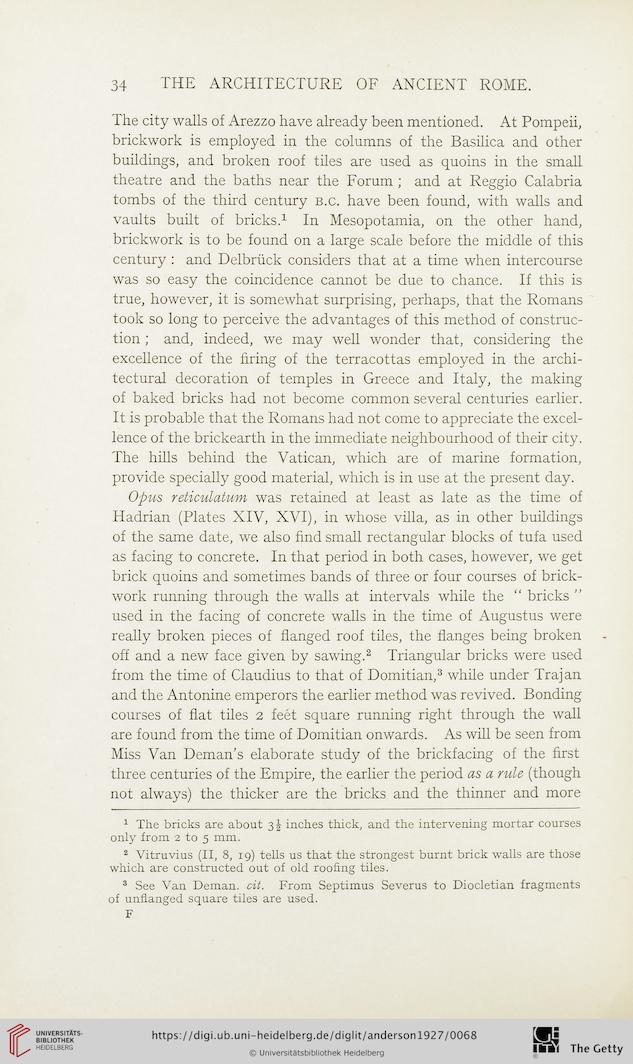 Information about OCR text
34 THE ARCHITECTURE OF ANCIENT ROME.

The city walls of Arezzo have already been mentioned. At Pompeii,
brickwork is employed in the columns of the Basilica and other
buildings, and broken roof tiles are used as quoins in the small
theatre and the baths near the Forum ; and at Reggio Calabria
tombs of the third century b.c. have been found, with walls and
vaults built of bricks.1 In Mesopotamia, on the other hand,
brickwork is to be found on a large scale before the middle of this
century : and Delbruck considers that at a time when intercourse
was so easy the coincidence cannot be due to chance. If this is
true, however, it is somewhat surprising, perhaps, that the Romans
took so long to perceive the advantages of this method of construc-
tion ; and, indeed, we may well wonder that, considering the
excellence of the firing of the terracottas employed in the archi-
tectural decoration of temples in Greece and Italy, the making
of baked bricks had not become common several centuries earlier.
It is probable that the Romans had not come to appreciate the excel-
lence of the brickearth in the immediate neighbourhood of their city.
The hills behind the Vatican, which are of marine formation,
provide specially good material, which is in use at the present day.
Opus reticulatum was retained at least as late as the time of
Hadrian (Plates XIV, XVI), in whose villa, as in other buildings
of the same date, we also find small rectangular blocks of tufa used
as facing to concrete. In that period in both cases, however, we get
brick quoins and sometimes bands of three or four courses of brick-
work running through the walls at intervals while the “ bricks ”
used in the facing of concrete walls in the time of Augustus were
really broken pieces of flanged roof tiles, the flanges being broken
off and a new face given by sawing.2 Triangular bricks were used
from the time of Claudius to that of Domitian,3 while under Trajan
and the Antonine emperors the earlier method was revived. Bonding
courses of flat tiles 2 feet square running right through the wall
are found from the time of Domitian onwards. As will be seen from
Miss Van Deman’s elaborate study of the brickfacing of the first
three centuries of the Empire, the earlier the period as a rule (though
not always) the thicker are the bricks and the thinner and more
1 The bricks are about 3! inches thick, and the intervening mortar courses
only from 2 to 5 mm.
2 Vitruvius (II, 8, 19) tells us that the strongest burnt brick walls are those
which are constructed out of old roofing tiles.
3 See Van Deman. cit. From Septimus Severus to Diocletian fragments
of unhanged square tiles are used.
F