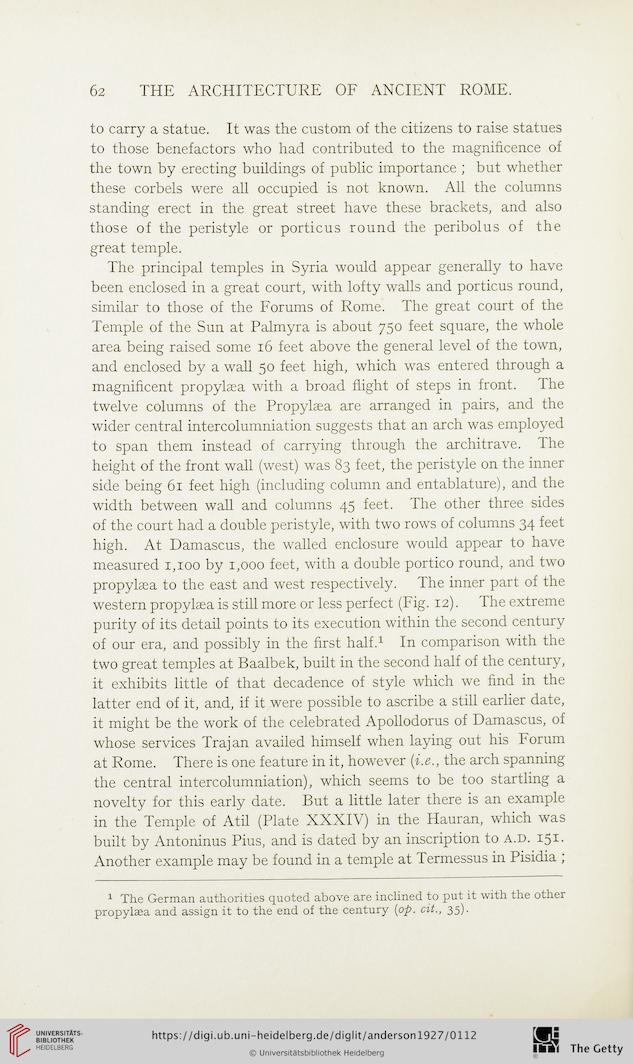 Information about OCR text
62 THE ARCHITECTURE OF ANCIENT ROME.

to carry a statue. It was the custom of the citizens to raise statues
to those benefactors who had contributed to the magnificence of
the town by erecting buildings of public importance ; but whether
these corbels were all occupied is not known. All the columns
standing erect in the great street have these brackets, and also
those of the peristyle or porticus round the peribolus of the
great temple.
The principal temples in Syria would appear generally to have
been enclosed in a great court, with lofty walls and porticus round,
similar to those of the Forums of Rome. The great court of the
Temple of the Sun at Palmyra is about 750 feet square, the whole
area being raised some 16 feet above the general level of the town,
and enclosed by a wall 50 feet high, which was entered through a
magnificent propylsea with a broad flight of steps in front. The
twelve columns of the Propylaea are arranged in pairs, and the
wider central intercolumniation suggests that an arch was employed
to span them instead of carrying through the architrave. The
height of the front wall (west) was 83 feet, the peristyle on the inner
side being 61 feet high (including column and entablature), and the
width between wall and columns 45 feet. The other three sides
of the court had a double peristyle, with two rows of columns 34 feet
high. At Damascus, the walled enclosure would appear to have
measured 1,100 by 1,000 feet, with a double portico round, and two
propylsea to the east and west respectively. The inner part of the
western propylsea is still more or less perfect (Fig. 12). The extreme
purity of its detail points to its execution within the second century
of our era, and possibly in the first half.1 In comparison with the
two great temples at Baalbek, built in the second half of the century,
it exhibits little of that decadence of style which we find in the
latter end of it, and, if it were possible to ascribe a still earlier date,
it might be the work of the celebrated Apollodorus of Damascus, of
whose services Trajan availed himself when laying out his Forum
at Rome. There is one feature in it, however (i.e., the arch spanning
the central intercolumniation), which seems to be too startling a
novelty for this early date. But a little later there is an example
in the Temple of Atil (Plate XXXIV) in the Hauran, which was
built by Antoninus Pius, and is dated by an inscription to a.d. 15i.
Another example may be found in a temple at Termessus in Pisidia ;
1 The German authorities quoted above are inclined to put it with the other
propylsea and assign it to the end of the century {op. cit., 35).