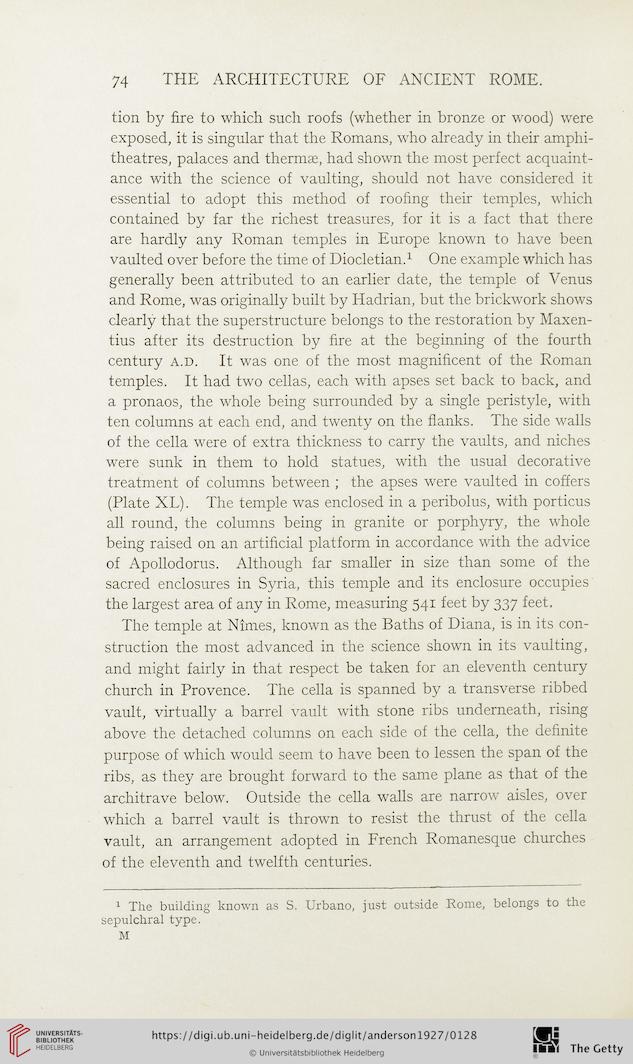 Information about OCR text
74 THE ARCHITECTURE OF ANCIENT ROME.

tion by fire to which such roofs (whether in bronze or wood) were
exposed, it is singular that the Romans, who already in their amphi-
theatres, palaces and thermae, had shown the most perfect acquaint-
ance with the science of vaulting, should not have considered it
essential to adopt this method of roofing their temples, which
contained by far the richest treasures, for it is a fact that there
are hardly any Roman temples in Europe known to have been
vaulted over before the time of Diocletian.1 One example which has
generally been attributed to an earlier date, the temple of Venus
and Rome, was originally built by Hadrian, but the brickwork shows
clearly that the superstructure belongs to the restoration by Maxen-
tius after its destruction by fire at the beginning of the fourth
century a.d. It was one of the most magnificent of the Roman
temples. It had two cellas, each with apses set back to back, and
a pronaos, the whole being surrounded by a single peristyle, with
ten columns at each end, and twenty on the flanks. The side walls
of the cella were of extra thickness to carry the vaults, and niches
were sunk in them to hold statues, with the usual decorative
treatment of columns between ; the apses were vaulted in coffers
(Plate XL). The temple was enclosed in a peribolus, with porticus
all round, the columns being in granite or porphyry, the whole
being raised on an artificial platform in accordance with the advice
of Apollodorus. Although far smaller in size than some of the
sacred enclosures in Syria, this temple and its enclosure occupies
the largest area of any in Rome, measuring 541 feet by 337 feet.
The temple at Nimes, known as the Baths of Diana, is in its con-
struction the most advanced in the science shown in its vaulting,
and might fairly in that respect be taken for an eleventh century
church in Provence. The cella is spanned by a transverse ribbed
vault, virtually a barrel vault with stone ribs underneath, rising
above the detached columns on each side of the cella, the definite
purpose of which would seem to have been to lessen the span of the
ribs, as they are brought forward to the same plane as that of the
architrave below. Outside the cella walls are narrow aisles, over
which a barrel vault is thrown to resist the thrust of the cella
vault, an arrangement adopted in French Romanesque churches
of the eleventh and twelfth centuries.

1 The building known as S. Urbano, just outside Rome, belongs to the
sepulchral type.