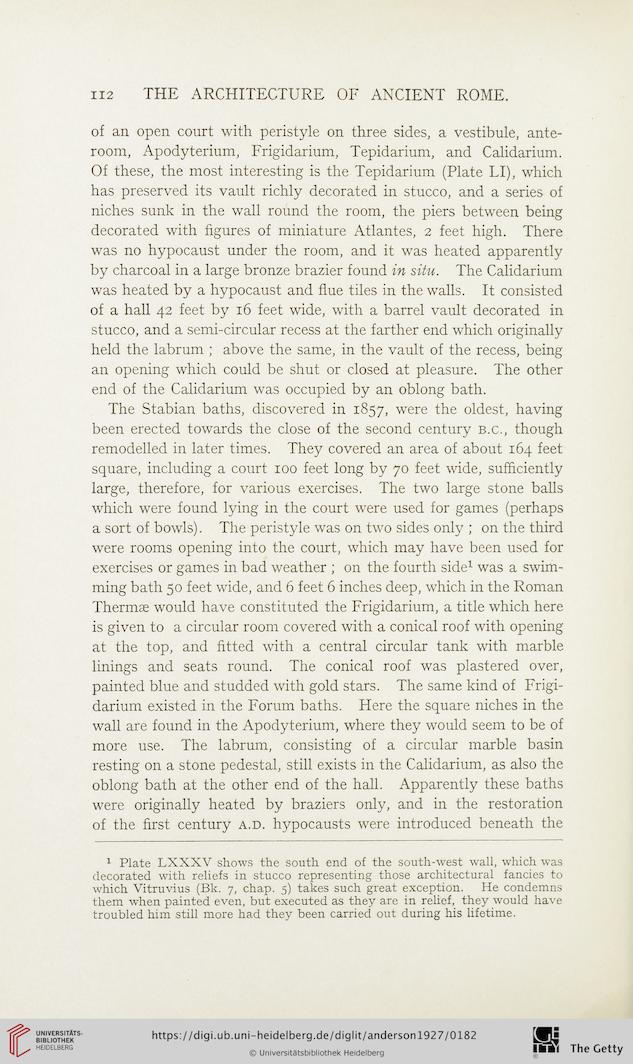 Information about OCR text
112 THE ARCHITECTURE OF ANCIENT ROME.

of an open court with peristyle on three sides, a vestibule, ante-
room, Apodyterium, Frigidarium, Tepidarium, and Calidarium.
Of these, the most interesting is the Tepidarium (Plate LI), which
has preserved its vault richly decorated in stucco, and a series of
niches sunk in the wall round the room, the piers between being
decorated with figures of miniature Atlantes, 2 feet high. There
was no hypocaust under the room, and it was heated apparently
by charcoal in a large bronze brazier found in situ. The Calidarium
was heated by a hypocaust and flue tiles in the walls. It consisted
of a hall 42 feet by 16 feet wide, with a barrel vault decorated in
stucco, and a semi-circular recess at the farther end which originally
held the labrum ; above the same, in the vault of the recess, being
an opening which could be shut or closed at pleasure. The other
end of the Calidarium was occupied by an oblong bath.
The Stabian baths, discovered in 1857, were the oldest, having
been erected towards the close of the second century b.c., though
remodelled in later times. They covered an area of about 164 feet
square, including a court 100 feet long by 70 feet wide, sufficiently
large, therefore, for various exercises. The two large stone balls
which were found lying in the court were used for games (perhaps
a sort of bowls). The peristyle was on two sides only ; on the third
were rooms opening into the court, which may have been used for
exercises or games in bad weather ; on the fourth side1 was a swim-
ming bath 50 feet wide, and 6 feet 6 inches deep, which in the Roman
Thermae would have constituted the Frigidarium, a title which here
is given to a circular room covered with a conical roof with opening
at the top, and fitted with a central circular tank with marble
linings and seats round. The conical roof was plastered over,
painted blue and studded with gold stars. The same kind of Frigi-
darium existed in the Forum baths. Here the square niches in the
wall are found in the Apodyterium, where they would seem to be of
more use. The labrum, consisting of a circular marble basin
resting on a stone pedestal, still exists in the Calidarium, as also the
oblong bath at the other end of the hall. Apparently these baths
were originally heated by braziers only, and in the restoration
of the first century a.d. hypocausts were introduced beneath the

1 Plate LXXXV shows the south end of the south-west wall, which was
decorated with reliefs in stucco representing those architectural fancies to
which Vitruvius (Bk. 7, chap. 5) takes such great exception. He condemns
them when painted even, but executed as they are in relief, they would have
troubled him still more had they been carried out during his lifetime.