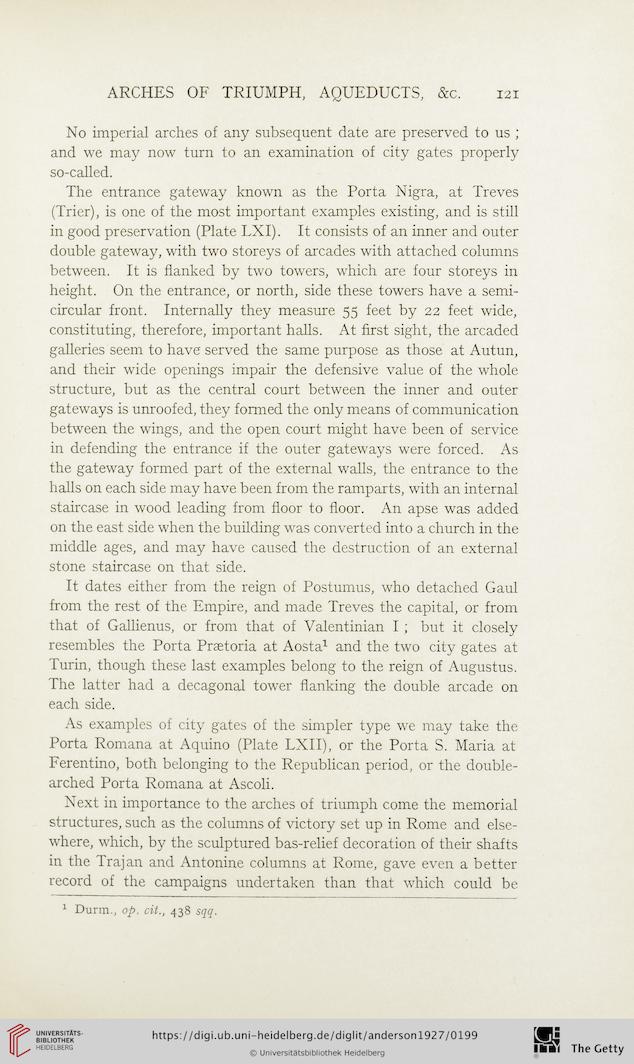 No imperial arches of any subsequent date are preserved to us ;
and we may now turn to an examination of city gates properly
so-called.
The entrance gateway known as the Porta Nigra, at Treves
(Trier), is one of the most important examples existing, and is still
in good preservation (Plate LXI). It consists of an inner and outer
double gateway, with two storeys of arcades with attached columns
between. It is flanked by two towers, which are four storeys in
height. On the entrance, or north, side these towers have a semi-
circular front. Internally they measure 55 feet by 22 feet wide,
constituting, therefore, important halls. At first sight, the arcaded
galleries seem to have served the same purpose as those at Autun,
and their wide openings impair the defensive value of the whole
structure, but as the central court between the inner and outer
gateways is unroofed, they formed the only means of communication
between the wings, and the open court might have been of service
in defending the entrance if the outer gateways were forced. As
the gateway formed part of the external walls, the entrance to the
halls on each side may have been from the ramparts, with an internal
staircase in wood leading from floor to floor. An apse was added
on the east side when the building was converted into a church in the
middle ages, and may have caused the destruction of an external
stone staircase on that side.
It dates either from the reign of Postumus, who detached Gaul
from the rest of the Empire, and made Treves the capital, or from
that of Gallienus, or from that of Valentinian I ; but it closely
resembles the Porta Praetoria at Aosta1 and the two city gates at
Turin, though these last examples belong to the reign of Augustus.
The latter had a decagonal tower flanking the double arcade on
each side.
As examples of city gates of the simpler type we may take the
Porta Romana at Aquino (Plate LXII), or the Porta S. Maria at
Ferentino, both belonging to the Republican period, or the double-
arched Porta Romana at Ascoli.
Next in importance to the arches of triumph come the memorial
structures, such as the columns of victory set up in Rome and else-
where, which, by the sculptured bas-relief decoration of their shafts
in the Trajan and Antonine columns at Rome, gave even a better
record of the campaigns undertaken than that which could be