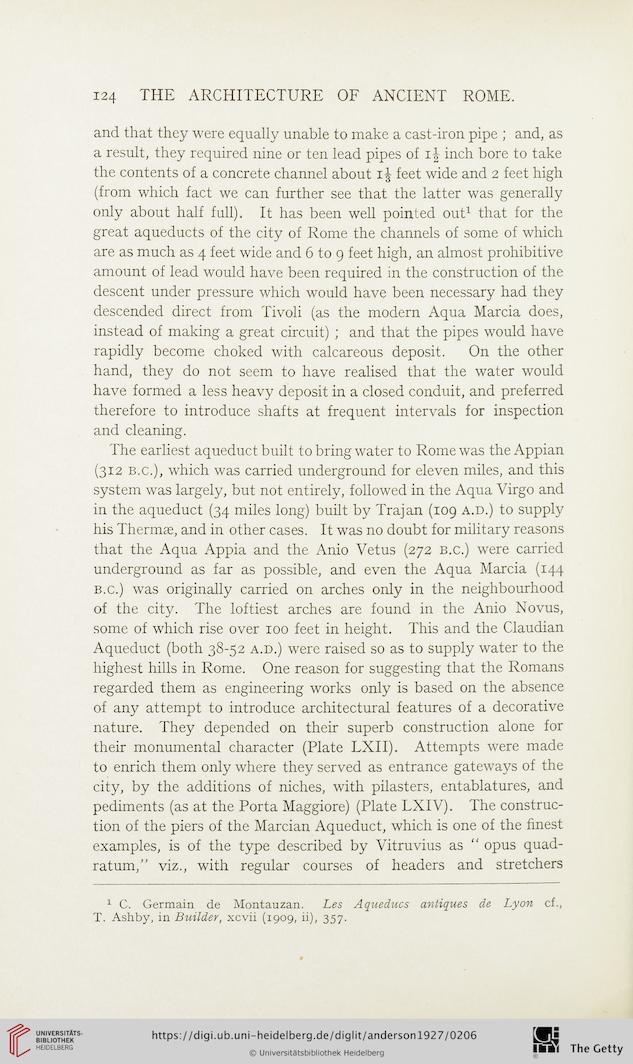 Information about OCR text
124 THE ARCHITECTURE OF ANCIENT ROME.

and that they were equally unable to make a cast-iron pipe ; and, as
a result, they required nine or ten lead pipes of i| inch bore to take
the contents of a concrete channel about i| feet wide and 2 feet high
(from which fact we can further see that the latter was generally
only about half full). It has been well pointed out1 that for the
great aqueducts of the city of Rome the channels of some of which
are as much as 4 feet wide and 6 to 9 feet high, an almost prohibitive
amount of lead would have been required in the construction of the
descent under pressure which would have been necessary had they
descended direct from Tivoli (as the modern Aqua Marcia does,
instead of making a great circuit) ; and that the pipes would have
rapidly become choked with calcareous deposit. On the other
hand, they do not seem to have realised that the water would
have formed a less heavy deposit in a closed conduit, and preferred
therefore to introduce shafts at frequent intervals for inspection
and cleaning.
The earliest aqueduct built to bring water to Rome was the Appian
(312 b.c.), which was carried underground for eleven miles, and this
system was largely, but not entirely, followed in the Aqua Virgo and
in the aqueduct (34 miles long) built by Trajan (109 A.d.) to supply
his Thermae, and in other cases. It was no doubt for military reasons
that the Aqua Appia and the Anio Vetus (272 b.c.) were carried
underground as far as possible, and even the Aqua Marcia (144
b.c.) was originally carried on arches only in the neighbourhood
of the city. The loftiest arches are found in the Anio Novus,
some of which rise over 100 feet in height. This and the Claudian
Aqueduct (both 38-52 a.d.) were raised so as to supply water to the
highest hills in Rome. One reason for suggesting that the Romans
regarded them as engineering works only is based on the absence
of any attempt to introduce architectural features of a decorative
nature. They depended on their superb construction alone for
their monumental character (Plate LXII). Attempts were made
to enrich them only where they served as entrance gateways of the
city, by the additions of niches, with pilasters, entablatures, and
pediments (as at the Porta Maggiore) (Plate LXIV). The construc-
tion of the piers of the Marcian Aqueduct, which is one of the finest
examples, is of the type described by Vitruvius as “ opus quad-
ratum,” viz., with regular courses of headers and stretchers