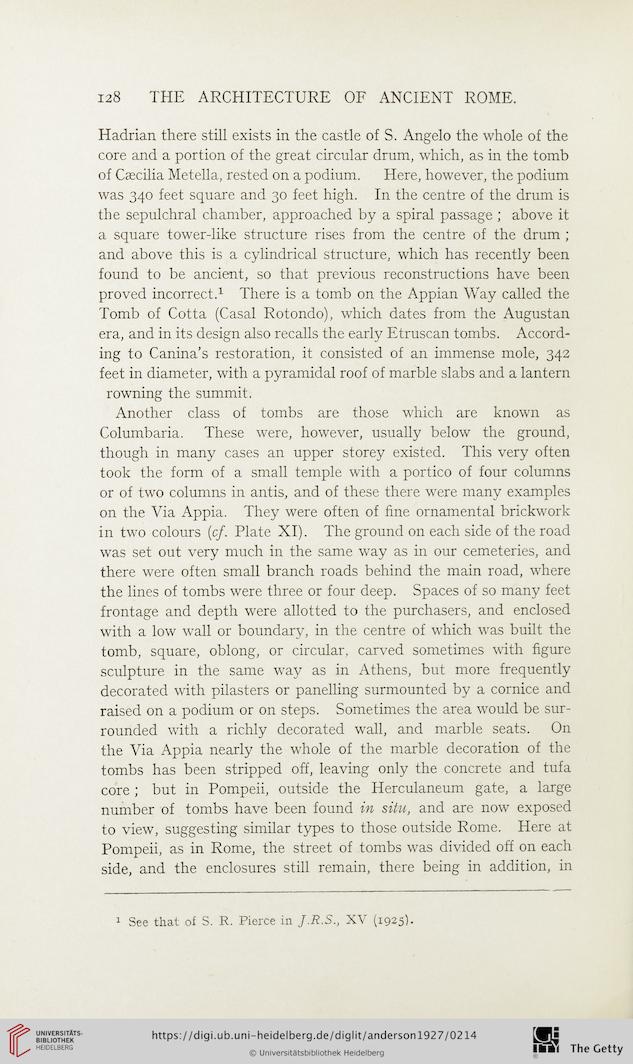 Information about OCR text
128 THE ARCHITECTURE OF ANCIENT ROME.

Hadrian there still exists in the castle of S. Angelo the whole of the
core and a portion of the great circular drum, which, as in the tomb
of Csecilia Metella, rested on a podium. Here, however, the podium
was 340 feet square and 30 feet high. In the centre of the drum is
the sepulchral chamber, approached by a spiral passage ; above it
a square tower-like structure rises from the centre of the drum ;
and above this is a cylindrical structure, which has recently been
found to be ancient, so that previous reconstructions have been
proved incorrect.1 There is a tomb on the Appian Way called the
Tomb of Cotta (Casal Rotondo), which dates from the Augustan
era, and in its design also recalls the early Etruscan tombs. Accord-
ing to Canina’s restoration, it consisted of an immense mole, 342
feet in diameter, with a pyramidal roof of marble slabs and a lantern
rowning the summit.
Another class of tombs are those which are known as
Columbaria. These were, however, usually below the ground,
though in many cases an upper storey existed. This very often
took the form of a small temple with a portico of four columns
or of two columns in antis, and of these there were many examples
on the Via Appia. They were often of fine ornamental brickwork
in two colours (cf. Plate XI). The ground on each side of the road
was set out very much in the same way as in our cemeteries, and
there were often small branch roads behind the main road, where
the lines of tombs were three or four deep. Spaces of so many feet
frontage and depth were allotted to the purchasers, and enclosed
with a low wall or boundary, in the centre of which was built the
tomb, square, oblong, or circular, carved sometimes with figure
sculpture in the same way as in Athens, but more frequently
decorated with pilasters or panelling surmounted by a cornice and
raised on a podium or on steps. Sometimes the area would be sur-
rounded with a richly decorated wall, and marble seats. On
the Via Appia nearly the whole of the marble decoration of the
tombs has been stripped off, leaving only the concrete and tufa
core; but in Pompeii, outside the Herculaneum gate, a large
number of tombs have been found in situ, and are now exposed
to view, suggesting similar types to those outside Rome. Here at
Pompeii, as in Rome, the street of tombs was divided off on each
side, and the enclosures still remain, there being in addition, in