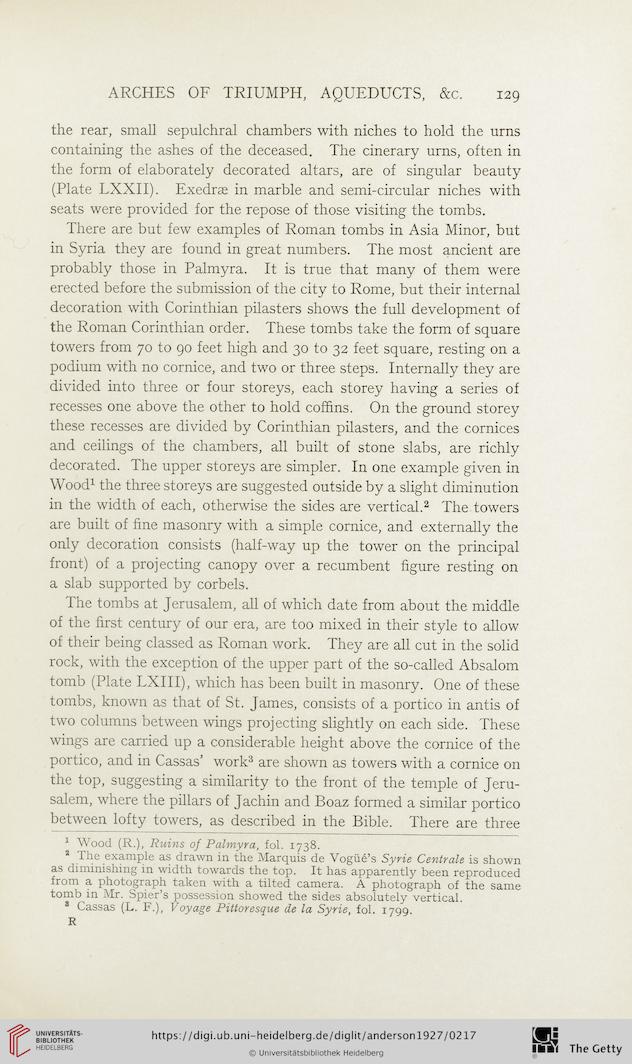 the rear, small sepulchral chambers with niches to hold the urns
containing the ashes of the deceased. The cinerary urns, often in
the form of elaborately decorated altars, are of singular beauty
(Plate LXXII). Exedrae in marble and semi-circular niches with
seats were provided for the repose of those visiting the tombs.
There are but few examples of Roman tombs in Asia Minor, but
in Syria they are found in great numbers. The most ancient are
probably those in Palmyra. It is true that many of them were
erected before the submission of the city to Rome, but their internal
decoration with Corinthian pilasters shows the full development of
the Roman Corinthian order. These tombs take the form of square
towers from 70 to 90 feet high and 30 to 32 feet square, resting on a
podium with no cornice, and two or three steps. Internally they are
divided into three or four storeys, each storey having a series of
recesses one above the other to hold coffins. On the ground storey
these recesses are divided by Corinthian pilasters, and the cornices
and ceilings of the chambers, all built of stone slabs, are richly
decorated. The upper storeys are simpler. In one example given in
Wood1 the three storeys are suggested outside by a slight diminution
in the width of each, otherwise the sides are vertical.2 The towers
are built of fine masonry with a simple cornice, and externally the
only decoration consists (half-way up the tower on the principal
front) of a projecting canopy over a recumbent figure resting on
a slab supported by corbels.
The tombs at Jerusalem, all of which date from about the middle
of the first century of our era, are too mixed in their style to allow
of their being classed as Roman work. They are all cut in the solid
rock, with the exception of the upper part of the so-called Absalom
tomb (Plate LXIII), which has been built in masonry. One of these
tombs, known as that of St. James, consists of a portico in antis of
two columns between wings projecting slightly on each side. These
wings are carried up a considerable height above the cornice of the
portico, and in Cassas’ work3 are shown as towers with a cornice on
the top, suggesting a similarity to the front of the temple of Jeru-
salem, where the pillars of Jachin and Boaz formed a similar portico
between lofty towers, as described in the Bible. There are three
1 Wood (R.), Ruins of Palmyra, fol. 1738.
2 The example as drawn in the Marquis de Vogue’s Syrie Centrals is shown
as diminishing in width towards the top. It has apparently been reproduced
from a photograph taken with a tilted camera. A photograph of the same
tomb in Mr. Spier’s possession showed the sides absolutely vertical.
8 Cassas (L. F.), Voyage Pittoresque de la Syrie, fol. 1799.
R