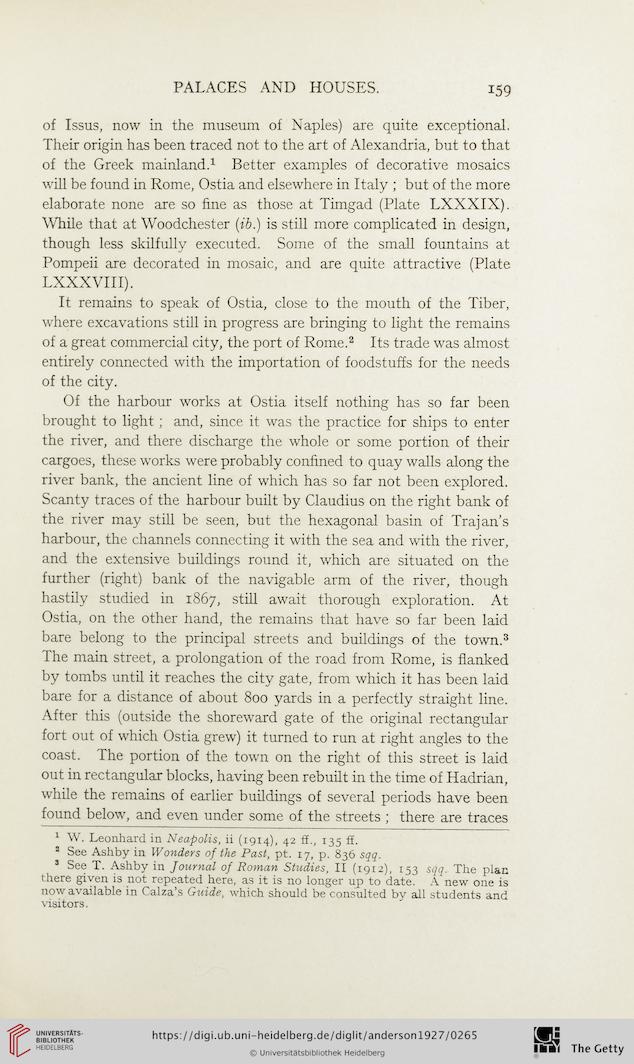 of Issus, now in the museum of Naples) are quite exceptional.
Their origin has been traced not to the art of Alexandria, but to that
of the Greek mainland.1 Better examples of decorative mosaics
will be found in Rome, Ostia and elsewhere in Italy ; but of the more
elaborate none are so fine as those at Timgad (Plate LXXXIX).
While that at Woodchester (ib.) is still more complicated in design,
though less skilfully executed. Some of the small fountains at
Pompeii are decorated in mosaic, and are quite attractive (Plate
LXXXVIII).
It remains to speak of Ostia, close to the mouth of the Tiber,
where excavations still in progress are bringing to light the remains
of a great commercial city, the port of Rome.2 Its trade was almost
entirely connected with the importation of foodstuffs for the needs
of the city.
Of the harbour works at Ostia itself nothing has so far been
brought to light; and, since it was the practice for ships to enter
the river, and there discharge the whole or some portion of their
cargoes, these works were probably confined to quay walls along the
river bank, the ancient line of which has so far not been explored.
Scanty traces of the harbour built by Claudius on the right bank of
the river may still be seen, but the hexagonal basin of Trajan’s
harbour, the channels connecting it with the sea and with the river,
and the extensive buildings round it, which are situated on the
further (right) bank of the navigable arm of the river, though
hastily studied in 1867, still await thorough exploration. At
Ostia, on the other hand, the remains that have so far been laid
bare belong to the principal streets and buildings of the town.3
The main street, a prolongation of the road from Rome, is flanked
by tombs until it reaches the city gate, from which it has been laid
bare for a distance of about 800 yards in a perfectly straight line.
After this (outside the shoreward gate of the original rectangular
fort out of which Ostia grew) it turned to run at right angles to the
coast. The portion of the town on the right of this street is laid
out in rectangular blocks, having been rebuilt in the time of Hadrian,
while the remains of earlier buildings of several periods have been
found below, and even under some of the streets ; there are traces
1 W. Leonhard in Neapolis, ii (1914), 42 ff., 135 ff.
2 See Ashby in Wonders of the Past, pt. 17, p. 836 sqq.
3 See T. Ashby in Journal of Roman Studies, II (1912), 153 sqq. The plan
there given is not repeated here, as it is no longer up to date. A new one is
now available in Galza’s Guide, which should be consulted by all students and
visitors.