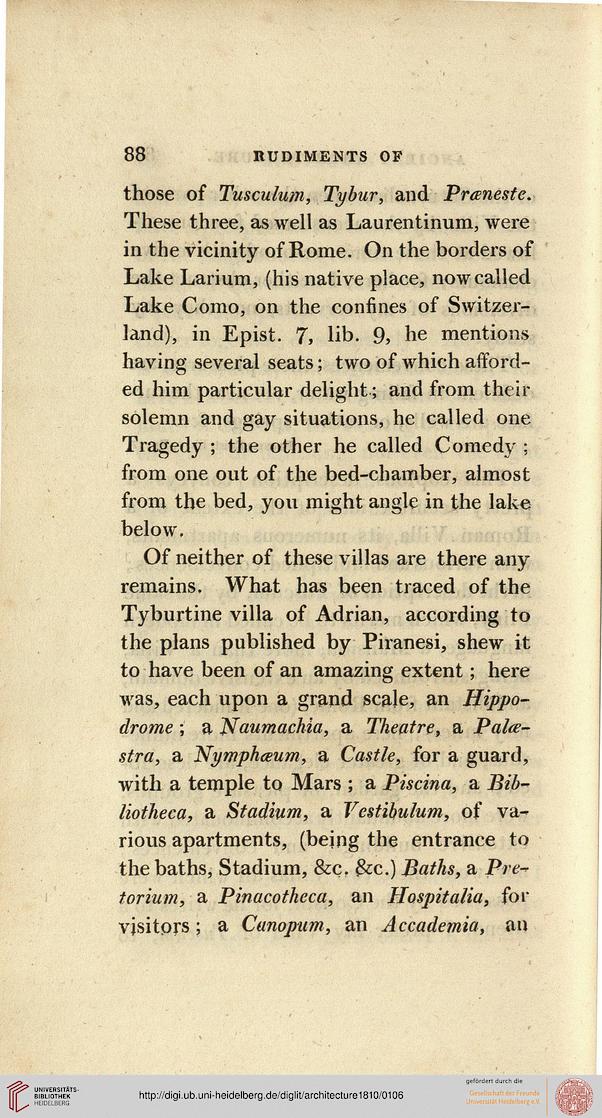 those of Tusculum, Tybur, and Prteneste.
These three, as well as Laurentinum, were
in the vicinity of Rome. On the borders of
Lake Larium, (his native place, now called
Lake Como, on the confines of Switzer-
land), in Epist. 7, lib. 9, he mentions
having several seats; two of which afford-
ed him particular delight; and from their
solemn and gay situations, he called one
Tragedy ; the other he called Comedy ;
from one out of the bed-chamber, almost
from the bed, you might angle in the lake
below.

Of neither of these villas are there any
remains. What has been traced of the
Tyburtine villa of Adrian, according to
the plans published by Piranesi, shew it
to have been of an amazing extent; here
was, each upon a grand scale, an Hippo-
drome ; a Naumachia, a Theatre, a Pale-
stra, a Nymphceum, a Castle, for a guard,
with a temple to Mars ; a Piscina, a Bib-
liotheca, a Stadium, a Vestibulum, of va-
rious apartments, (being the entrance to
the baths, Stadium, &c, &c.) Baths, a -Pre-*
torium, a Pinacotheca, an Hospitalia, for
visitors; a Canopum, an Accademia, an