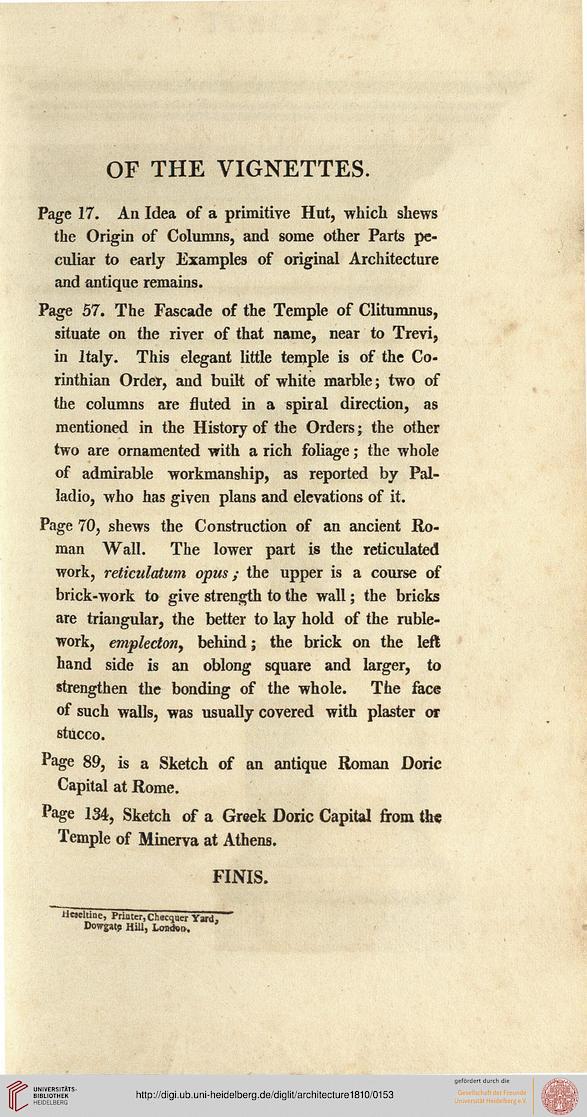 Information about OCR text
OF THE VIGNETTES.

Page 17. An Idea of a primitive Hut, which shews
the Origin of Columns, and some other Parts pe-
culiar to early Examples of original Architecture
and antique remains.

Page 57. The Fascade of the Temple of Clitumnus,
situate on the river of that name, near to Trevi,
in Italy. This elegant little temple is of the Co-
rinthian Order, and built of white marble; two of
the columns are fluted in a spiral direction, as
mentioned in the History of the Orders j the other
two are ornamented with a rich foliage; the whole
of admirable workmanship, as reported by Pal-
ladio, who has given plans and elevations of it.

Page 70, shews the Construction of an ancient Ro-
man Wall. The lower part is the reticulated
work, reticulatum opus; the upper is a course of
brick-work to give strength to the wall; the bricks
are triangular, the better to lay hold of the ruble-
work, emplecton, behind; the brick on the left
hand side is an oblong square and larger, to
strengthen the bonding of the whole. The face
of such walls, was usually covered with plaster or
stucco.

Page 89, is a Sketch of an antique Roman Doric
Capital at Rome.

Page 134, Sketch of a Greek Doric Capital from th«
Temple of Minerva at Athens.