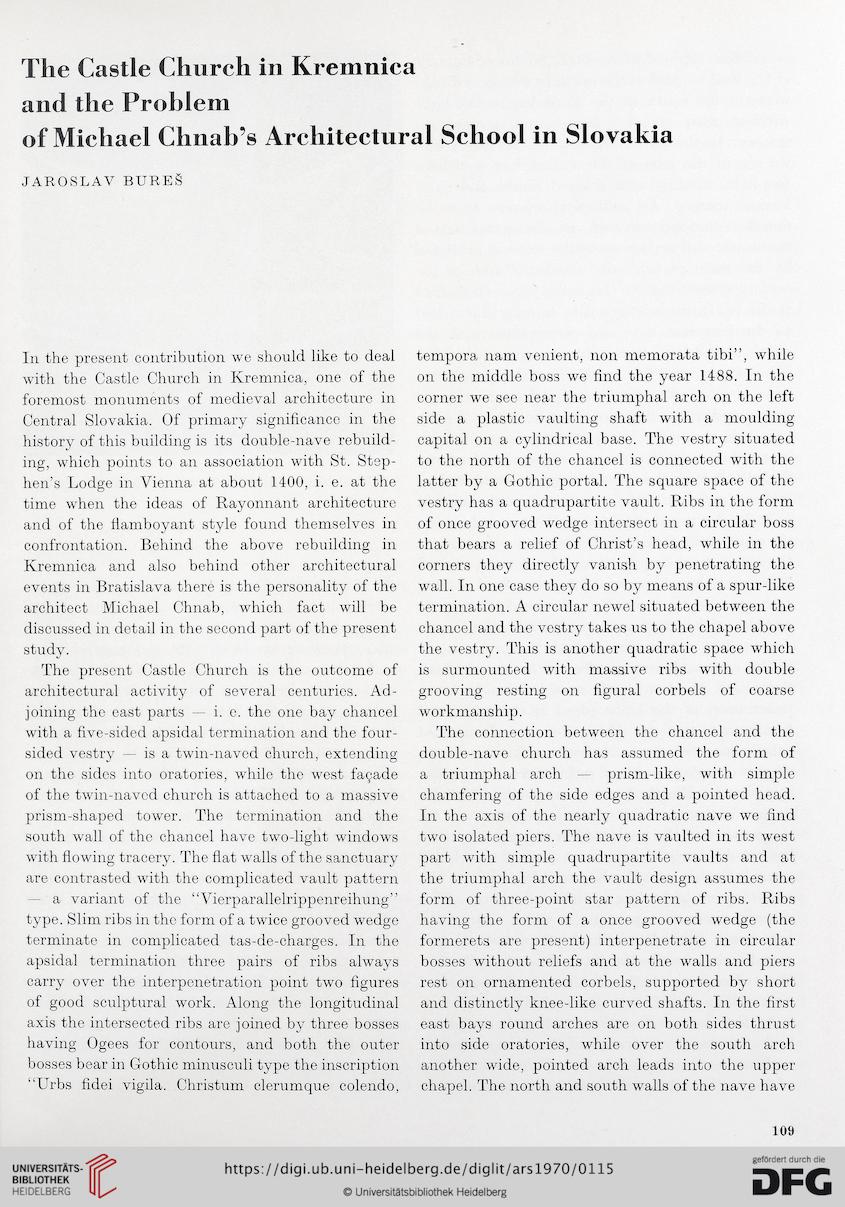 In the present contribution we should like to deal
with the Castle Church in Kremnica, one of the
foremost monuments of medieval architecture in
Central Slovakia. Of primary significance in the
history of this building is its double-nave rebuild-
ing, which points to an association with St. Step-
hen’s Lodge in Vienna at about 1400, i. e. at the
time when the ideas of Rayonnant architecture
and of the flamboyant style found themselves in
confrontation. Behind the above rebuilding in
Kremnica and also behind other architectural
events in Bratislava there is the personality of the
architect Michael Chnab, which fact will be
discussed in detail in the second part of the present
study.
The present Castle Church is the outcome of
architectural activity of several centuries. Ad-
joining the cast parts — i. c. the one bay chancel
with a five-sided apsidal termination and the four-
sided vestry — is a twin-navcd church, extending
on the sidcs into oratories, whilc the west façade
of the twin-navcd church is attachod to a massive
prism-shaped tower. The termination and the
south wall of the chancel have two-light Windows
with flowing tracery. The flat walls of the sanctuary
are contrasted with the complicated vault pattern
- a variant of the “Vierparallelrippenreihung”
type. Slim ribs in the form of a twice grooved wedge
terminate in complicated tas-de-charges. In the
apsidal termination three pairs of ribs always
carry over the interpénétration point two figures
of good sculptural work. Along the longitudinal
axis the intersected ribs are joined by three bosses
having Ogees for contours, and both the outer
bosses bear in Gothic minusculi type the inscription
“Urbs fidei vigila. Christum clerumque colendo,

tempora nam veulent, non memorata tibi”, while
on the middle boss we find the year 1488. In the
corner we see near the triumphal arch on the left
side a plastic vaulting shaft with a moulding
capital on a cylindrical base. The vestry situated
to the north of the chancel is connected with the
latter by a Gothic portal. The square space of the
vestry has a quadrupartite vault. Ribs in the form
of once grooved wedge intersect in a circular boss
that bears a relief of Christ’s head, while in the
corners they directly vanish by penetrating the
wall. In one case they do so by means of a spur-like
termination. A circular newel situated between the
chancel and the vestry takes us to the chapel above
the vestry. This is another quadratic space which
is surmounted with massive ribs with double
grooving resting on figural corbels of coarse
workmanship.
The connection between the chancel and the
double-nave church has assumed the form of
a triumphal arch — prism-like, with simple
chamfering of the side edges and a pointed head.
In the axis of the nearly quadratic nave we find
two isolated piers. The nave is vaulted in its west
part with simple quadrupartite vaults and at
the triumphal arch the vault design assumes the
form of three-point star pattern of ribs. Ribs
having the form of a once grooved wedge (the
formerets are present) interpenetrate in circular
bosses without reliefs and at the walls and piers
rest on ornamented corbels, supported by short
and distinctly knee-like curved shafts. In the first
east bays round arches are on both sides thrust
into side oratories, while over the south arch
another wide, pointed arch leads into the upper
chapel. The north and south walls of the nave have