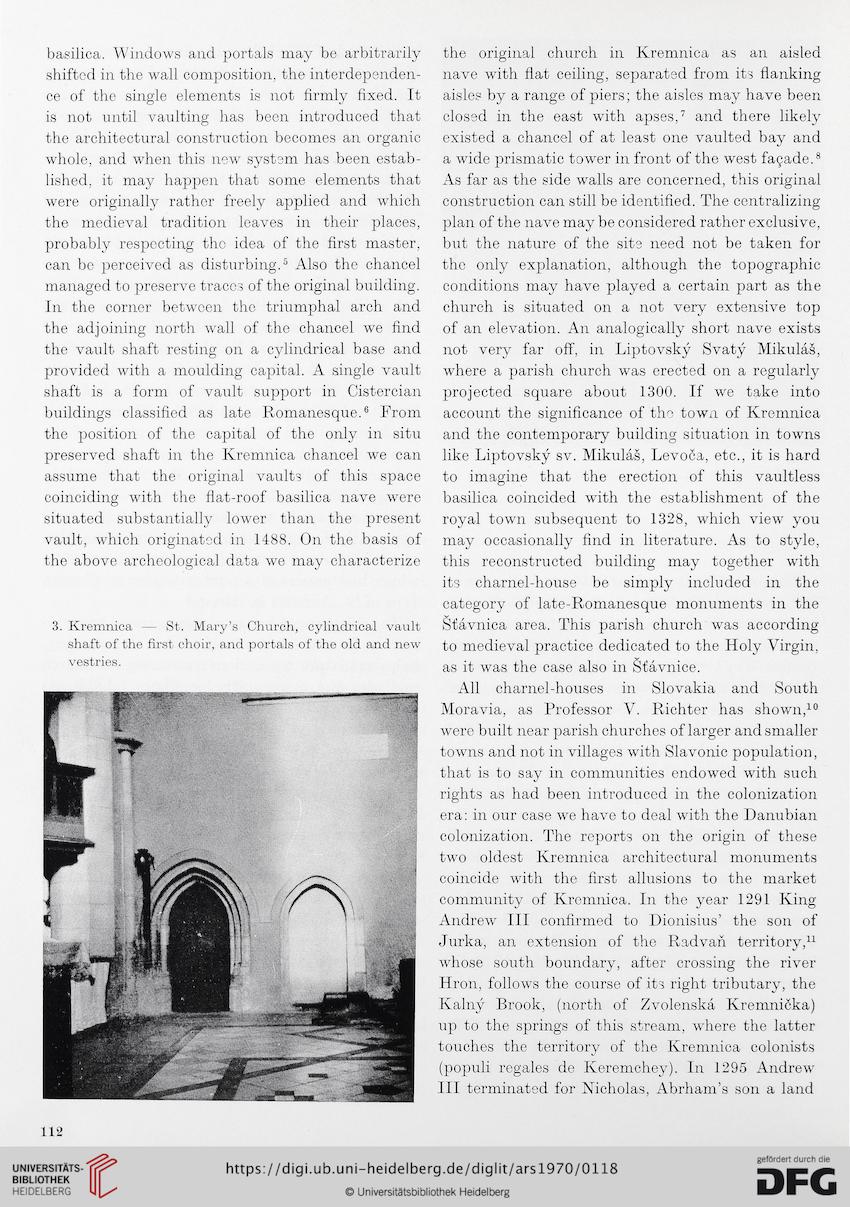 Information about OCR text
basilica. Windows and portais may be arbitrarily
shiftod in the wall composition, the interdependen-
ce of the single éléments is not fi.rm.ly fixed. It
is not until vaulting has been introduced that
the architectural construction becomes an organic
whole, and when this new systém has been estab-
lished, it may happen that some elements that
were originally rathcr freely applied and which
the medieval tradition leaves in their places,
probably respecting the idea of the first master,
can be perceived as disturbing.5 Also the chancel
managed to preserve traces of the original building.
In the corner betwoen the triumphal arch and
the adjoining north wall of the chancel we find
the vault shaft resting on a cylindrical base and
provided with a moulding capital. A single vault
shaft is a form of vault support in Cistercian
buildings classified as late Romanesque.6 From
the position of the capital of the only in situ
preserved shaft in the Kremnica chancel we can
assume that the original vaults of this space
coincicling with the fiat-roof basilica nave were
situated substantially lower than the present
vault, which originatod in 1488. On the basis of
the above archeological data we may characterize

3. Kremnica — St. Mary’s Church, cylindrical vault
shaft of the first choir, and portais of the old and new
vestries.


the original church in Kremnica as an aisled
nave with fiat ceiling, separated from its flanking
aisles by a range of piers; the aisles may hâve been
closed in the east with apses,7 and there likely
existed a chancel of at least one vaulted bay and
a wide prismatic tower in front of the west façade.8
As far as the side walls are concerned, this original
construction can still be identified. The centralizing
plan of the nave may be considered rather exclusive,
but the nature of the site need not be taken for
the only explanation, although the topographie
conditions may hâve played a certain part as the
church is situated on a not very extensive top
of an élévation. An analogically short nave exists
not very far off, in Liptovský Svatý Mikuláš,
where a parish church was erected on a regularly
projected square about 1300. If we take into
account the significance of the towa of Kremnica
and the Contemporary building situation in towns
like Liptovský sv. Mikuláš, Levoča, etc., it is hard
to imagine that the érection of this vaultless
basilica coincided with the establishment of the
royal town subséquent to 1328, which view you
may occasionally find in literatuře. As to style,
this reconstructed building may together with
its charnel-house be simply included in the
category of late-Romanesque monuments in the
Šťávnica area. This parish church was according
to medieval practice dedicated to the Holy Virgin,
as it was the case also in Šťávnice.
All charnel-houses in Slovakia and South
Moravia, as Professor V. Richter has shown,10
were built near parish churches of larger andsmaller
towns and not in villages with Slavonie population,
that is to say in communities endowed with such
rights as had been introduced in the colonization
era: in our case we hâve to deal with the Danubian
colonization. The reports on the origin of these
two oldest Kremnica architectural monuments
coincide with the first allusions to the market
community of Kremnica. In the year 1291 King
Andrew III confirmed to Dionisius’ the son of
Jurka, an extension of the Radvaň territory,11
whose south boundary, after Crossing the river
Hron, follows the course of its right tributary, the
Kalný Brook, (north of Zvolenská Kremniëka)
up to the springs of this stream, where the latter
touches the territory of the Kremnica colonists
(populi regales de Keremchey). In 1295 Andrew
III terminated for Nicholas, Abrham’s son a land