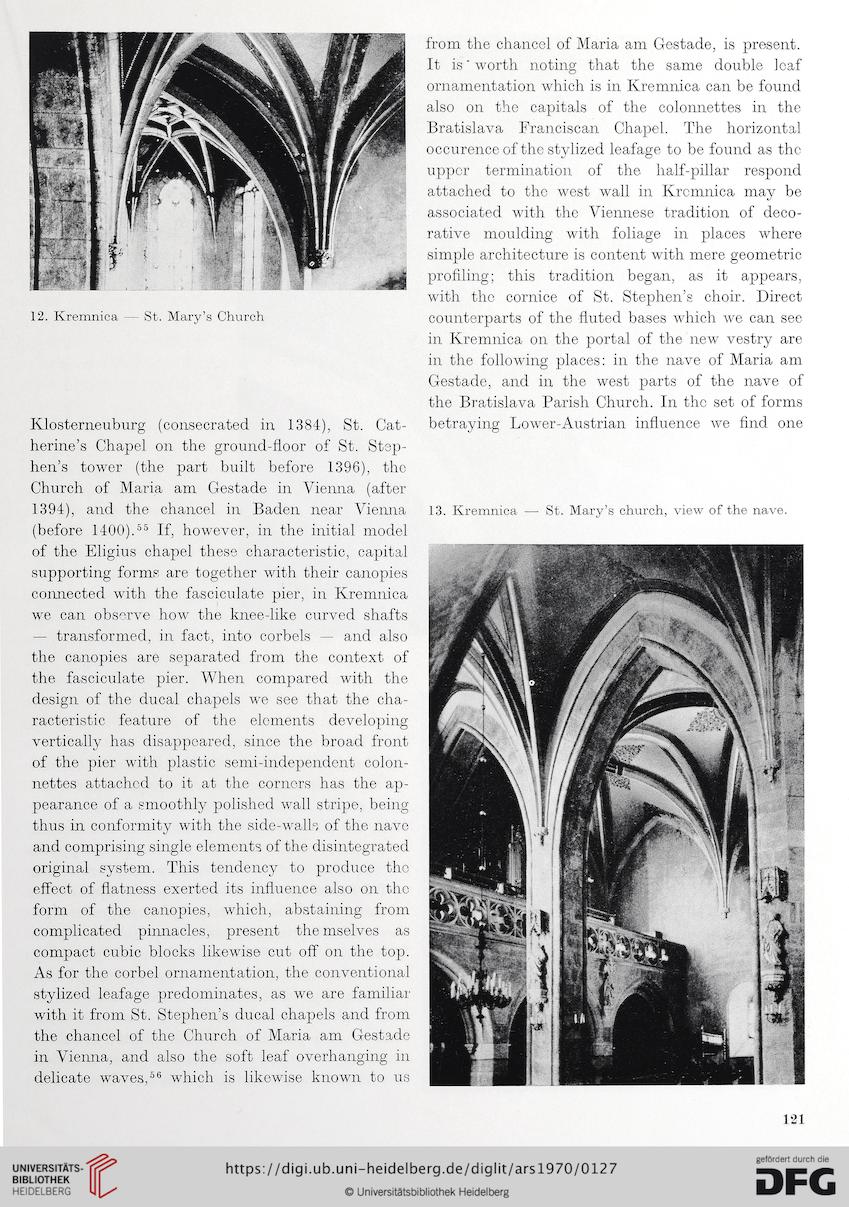 Klosterneuburg (consecrated in 1384), St. Cat-
herine’» Chapel on the ground-floor of St. Step-
hen’s tower (the part built before 1396), the
Church of Maria am Gestade in Vienna (after
1394), and the chancel in Baden near Vienna
(before 1400).55 If, however, in the initial model
of the Eligius chapel these characteristic, capital
supporting forms are together with their canopies
connected with the fasciculate pier, in Kremnica
we can observe how the knee-like curved shafts
— transformed, in fact, into corbels — and also
the canopies are separated from the context of
the fasciculate pier. When compared with the
design of the ducal chapels we see that the cha-
racteristic feature of the eloments developing
vertically has disappeared, since the broad front
of the pier with plastic semi-independent colon-
nettes attachod to it at the corners has the ap-
pearance of a smoothly polished wall stripe, being
thus in conformity with the side-walh of the nave
and comprising single éléments of the disintegrated
original systém. Tins tendency to produce the
effect of flatness exerted its influence also on the
form of the canopies, which, abstaining from
complicated pinnacles, present the mselves as
compact cubic blocks likewise eut off on the top.
As for the corbel ornamentation, the conventional
stylized leafage prédominâtes, as we are familiär
with it from St. Stephen’s ducal chapels and from
the chancel of the Church of Maria am Gestade
in Vienna, and also the soft leaf overhanging in
délicate waves,56 which is likewise known to us

from the chancel of Maria am Gestade, is present.
It is ' worth noting that the same double loaf
ornamentation which is in Kremnica can be founcl
also on the capitals of the colonnettes in the
Bratislava Franciscan Chapel. The horizontal
occurence ofthe stylized leafage to be found as the
upper termination of the half-pillar respond
attached to the west wall in Kremnica may be
associated with the Viennese tradition of déco-
rative moulding with foliage in places where
simple architecture is content with mere geometrie
profiling; this tradition began, as it appears,
with the cornice of St. Stephen’s choir. Direct
counterparts of the fluted bases which we can see
in Kremnica on the portal of the new vestry are
in the following places: in the nave of Maria am
Gestade, and in the west parts of the nave of
the Bratislava Parish Church. In the set of forms
betraying Lower-Austrian influence we find one