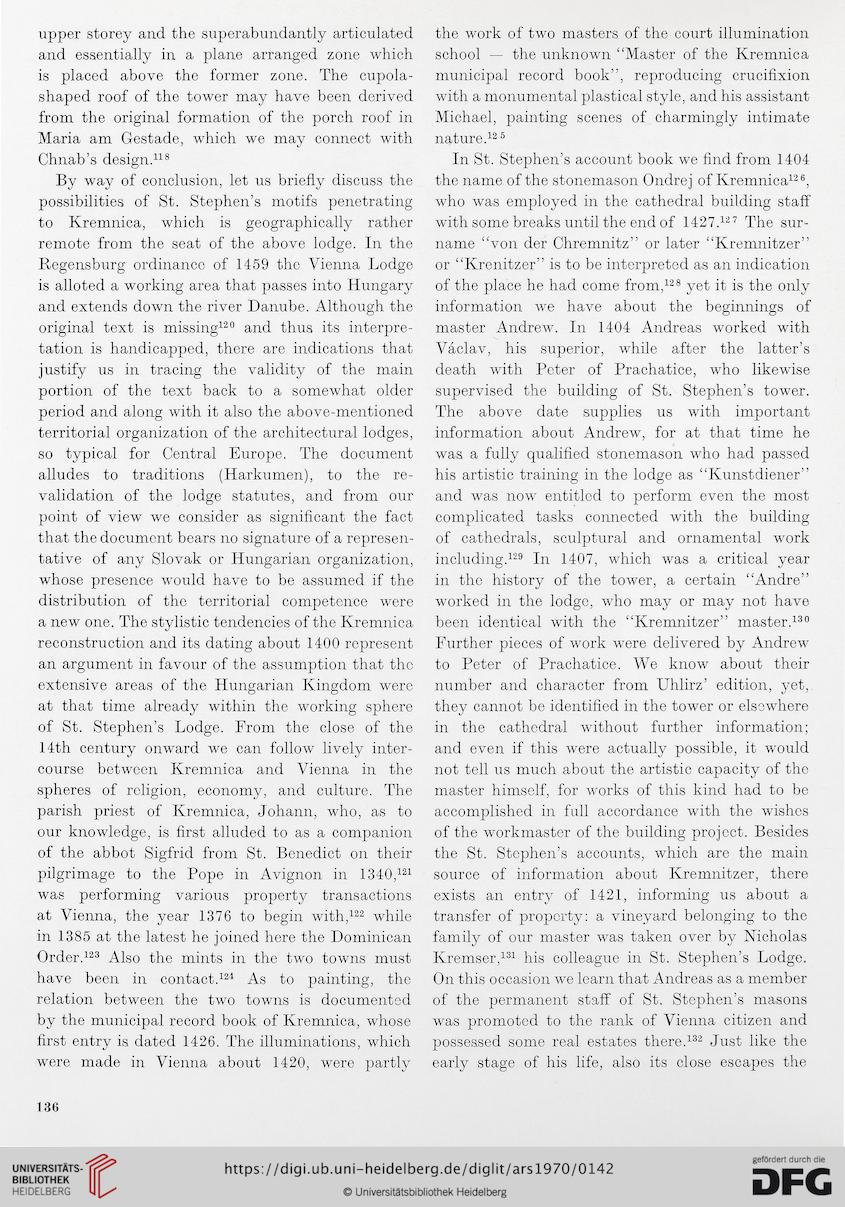 Information about OCR text
upper storey and the superabundantly articulated
and essentially in a plane arranged zone which
is placed above the former zone. The cupola-
shaped roof of the tower may háve been derived
from the original formation of the porch roof in
Maria am Gestade, which we may connect with
Chnab’s design.118
By way of conclusion, let us briefly discuss the
possibilities of St. Stephen’s motifs penetrating
to Kremnica, which is geographically rather
remote from the seat of the above lodge. In the
Regensburg ordinance of 1459 the Vienna Lodge
is alloted a working area that passes into Hungary
and extends down the river Danube. Although the
original text is missing120 and thus its interpré-
tation is handicapped, there are indications that
justify us in tracing the validity of the main
portion of the text back to a somewhat older
period and along with it also the above-mentioned
territorial Organization of the architectural lodges,
so typical for Central Europe. The document
alludes to traditions (Harkumen), to the re-
validation of the lodge Statutes, and from our
point of view we consider as significant the fact
that the document bears no signature of a représen-
tative of any Slovák or Hungarian Organization,
whose presence would have to be assumed if the
distribution of the territorial compétence were
a new one. The stylistic tendencies of the Kremnica
reconstruction and its dating about 1400 rcpresent
an argument in favour of the assumption that the
extensive areas of the Hungarian Kingdom were
at that time already within the working sphere
of St. Stephen’s Lodge. From the close of the
14th Century onward we can foliow lively inter-
course between Kremnica and Vienna in the
spheres of religion, economy, and culture. The
parish priest of Kremnica, Johann, who, as to
our knowledge, is first alluded to as a companion
of the abbot Sigfrid from St. Benedict on their
pilgrimage to the Pope in Avignon in 1340,121
was performing varions property transactions
at Vienna, the year 1376 to begin with,122 while
in 1385 at the latest he joined here the Dominican
Order.123 Also the mints in the two towns must
have becn in contact.121 As to painting, the
relation between the two towns is documented
by the municipal record book of Kremnica, whose
first entry is dated 1426. The illuminations, which
were made in Vienna about 1420, were partly

the work of two masters of the court illumination
school — the unknown “Master of the Kremnica
municipal record book”, reproducing crucifixion
with a monumental plastical style, and his assistant
Michael, painting scenes of charmingly intimate
nature.125
In St. Stephen’s account book we find from 1404
the name of the stonemason Ondřej of Kremnica126,
who was employed in the cathédral building staff
with some breaks until the end of 1427.127 The sur-
name “von der Chremnitz” or later “Kremnitzer”
or “Krenitzer” is to be interpreted as an indication
of the place he had come from,128 yet it is the only
information we have about the beginnings of
master Andrew. In 1404 Andreas worked with
Václav, his superior, while after the latter’s
death with Peter of Prachatice, who likewise
supervisée! the building of St. Stephen’s tower.
The above date supplies us with important
information about Andrew, for at that time he
was a fully qualified stonemason who had passed
his artistic training in the lodge as “Kunstdiener”
and was now entitlcd to perform even the most
complicated tasks connected with the building
of cathedrals, sculptural and ornamental work
including.129 In 1407, which was a critical year
in the history of the tower, a certain “Andre”
worked in the lodge, who may or may not have
been identical with the “Kremnitzer” master.130
Fürther pièces of work were delivered by Andrew
to Peter of Prachatice. We know about their
number and character from Uhlirz’ édition, yet,
they cannot be identified in the tower or elsowhere
in the cathédral without further information;
and even if this were actually possible, it would
not teil us much about the artistic capacity of the
master himself, for works of this kind had to be
accomplished in full accordance with the wishes
of the workmaster of the building projcct. Besides
the St. Stephen’s accounts, which are the main
source of information about Kremnitzer, there
exists an entry of 1421, informing us about a
transfer of property: a vineyard belonging to the
family of our master was taken over by Nicholas
Kremser,131 his colleague in St. Stephen’s Lodge.
On this occasion we learn that Andreas as a member
of the permanent staff of St. Stephen’s masons
was promoted to the rank of Vienna citizen and
possessed some real estâtes there.132 Just like the
early stage of his life, also its close escapes the