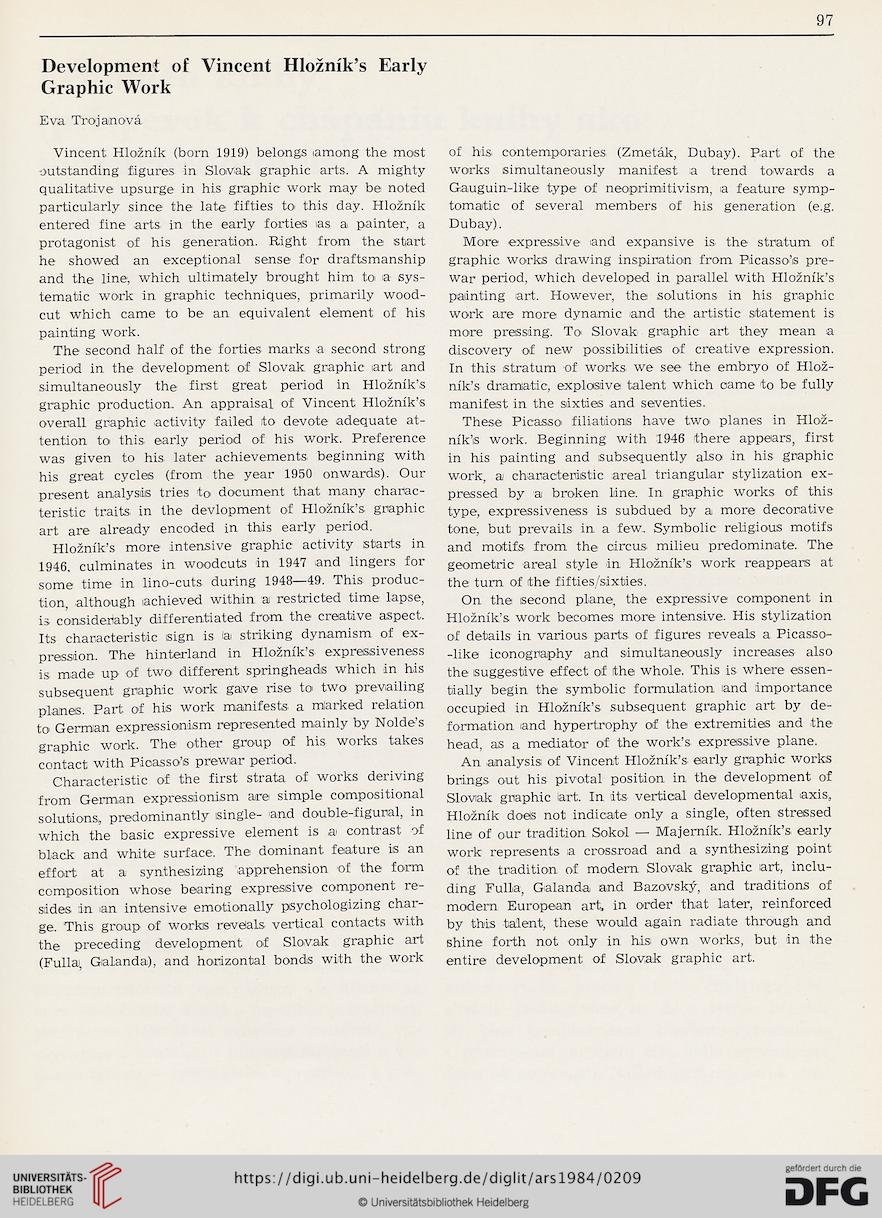 Development of Vincent Hloznik’s Early
Graphie Work
Eva Trojanová
Vincent Hložník (bom 1919) belongs ïamong the most
outstanding figures in Slovák graphie arts. A mighty
qualitative upsurge in his graphie work may be noted
particularly since the late fifties to this day. Hložník
entered fine arts, in the early forties as a painter, a
Protagonist of his génération. Right from the start
he showed an exceptional sense for draftsmanship
and the line, which ultimately brought him to >a sys-
tematic work in graphie techniques, primarily wood-
cut which came to be an équivalent element of his
painting work.
The second half of the forties marks a second strong
period in the development of Slovák graphie iart and
simultaneously the first great period in Hložník’,s
graphie production.. An appraisal of Vincent Hloznik’s
overall graphie activity failed to devote adéquate at-
tention toi this early period of his work. Preference
was given to his later achievements beginning with
his great cycles (from the year 1950 onwards). Our
present analysais tries to document that many charac-
teristic traits in the devlopment of Hložník’s graphie
art are already encoded in this early period.
Hložník’s more intensive graphie activity Starts in
1946, culminâtes in woodcuts in 1947 and lingers for
some time in lino-cuts during 1948—49. This produc-
tion, although achieved within a restricted time lapse,
is consideriably differentiated from the Creative aspect.
Its characteristic isign is la striking dynamism of ex-
pression. The hinterland in Hložník’s expressiveness
is made up of two different springheads which in his
subséquent graphie work gave rise to two prevailing
planes. Part of his work manifeste a m'arked relation
to German expressionism represented mainly by Nolde’s
graphie work. The other group of his works takes
contact with Pioasso’s prewar period.
Characteristic of the first strata of works deriving
from German expressionism are simple compositional
solutions, predominantly isingle- and double-figural, in
which the basic expressive element is a contrast of
black and white surface. The dominant feature is an
effort at a synthesizing appréhension of the form
composition whose bearing expressive component ré-
sides in an intensive emotionally psychologizing char-
ge. This group of works reveals vertical contacts with
the preceding development of Slovák graphie art
(Fulla, Gialanda), and horizontal bonds with the work

of his contemporaries (Zmeták, Dubay). Part of the
works simultaneously manifest a trend towards a
Gauguin-like type of neoprimitivism, a feature symp-
tomatic of several members of his génération (e.g.
Dubay).
More expressive and expansive is the stratum of
graphie works drawing inspiration from Picasso’s pre-
war period, which developed in parallel with Hloznik’s
painting art. However, the solutions in his graphie
work are more dynamic and the artistic Statement is
more pressing. To Slovák graphie art they mean a
discovery of new possibilities of Creative expression.
In this stratum of works we see the embryo of Hlož-
nik’s dramatic, explosive talent which came to be fully
manifest in the sixties and seventies.
These Picasso filiations hâve two planes in Hlož-
nik’is work. Beginning with 1946 there appears, first
in his painting and subsequently also in his graphie
work, a characteristic areal triangular stylization ex-
pressed by a broken line. In graphie works of this
type, expressiveness is subdued by a more décorative
tone, but prevails in a few. Symbolic religions motifs
and motifs from the circus milieu predominate. The
geometrie areal style in Hloznik’s work reappears at
the turn of the fifties/sixties.
On the second plane, the expressive component in
Hloznik’s work becomes more intensive. His stylization
of details in varions parts of figures reveals a Picasso-
-like iconography and simultaneously increases also
the suggestive effect of the whole. This is where essen-
tially begin the symbolic formulation and importance
occupied in Hloznik’s subséquent graphie art by dé-
formation and hypertrophy of the extremities and the
head, as a mediator of the work’s expressive plane.
An analysis of Vincent Hloznik’s early graphie works
brings out his pivotai position in the development of
Slovák graphie lart. In its vertical developmental axis,
Hložník doels not indicate only a single, often stressed
line of our tradition Sokol — Majemik. Hloznik’s early
work represents ia crossroad and a synthesizing point
of the tradition of modem Slovák graphie art, inclu-
ding Fulla, Galanda and Bazovský, and traditions of
modem European art, in Order that later, reinforced
by this talent, these would again radiate through and
shine forth not only in his; own works, but in the
entire development of Slovák graphie art.