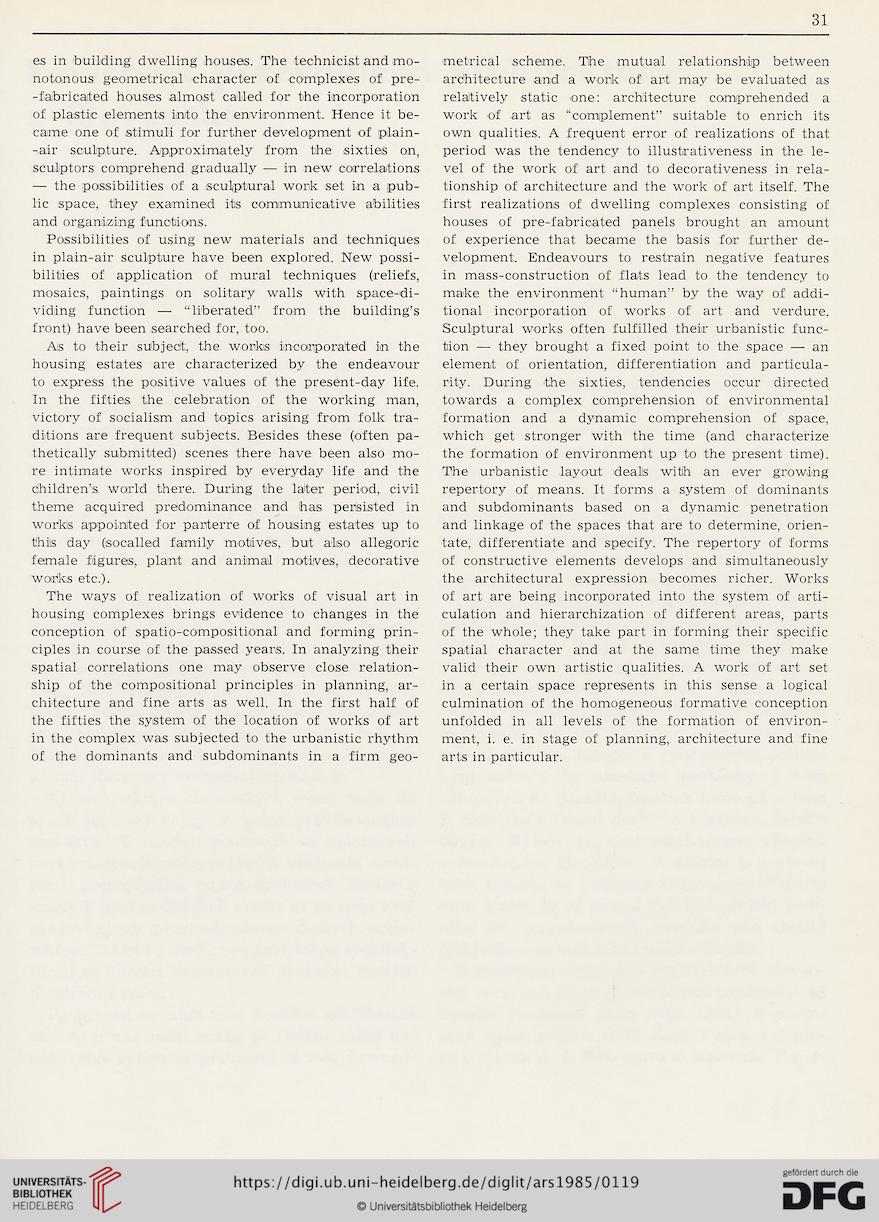 es in building dwelling houses. The technicist and mo-
notonous geometrical character of complexes of pre-
-faibricarted houses almost called for the incorporation
of plastic éléments toto the environment. Hence it be-
came one of Stimuli for further development of plain-
-air sculpture. Approximately from the sixties on,
sculptors comprehend gr.adually — in new corrélations
— the possibiilities of a sculptural work set in a pub-
lic space, they examined its communicative abilities
and organiztog fonctions.
Possibilities of using new materials and techniques
in plain-air sculpture hâve been explored. New possi-
bilities of application of mural techniques (reliefs,
mosaics, paintings on solitary walls with space-di-
viding function — “liberated” from the building’s
front) hâve been searched for, too.
Ais to their subjedt, the Works incorporated in the
housing estâtes are characterized by the endeavour
to express the positive values of the present-day life.
In the fifties the célébration of the working man,
Victory of socialism and topics arising from folk tra-
ditions are frequent subjects. Besides these (offen pa-
thetically submitted) scenes there hâve been also mo-
re intimate works inspired by everyday life and the
dhildren’s world there. Düring the later period, civil
thème acquired prédominance and has perlsisted in
works appoinited for parterre of housing estâtes up to
tlhis day (socalled family motives, but also allégorie
female figures, plant and animal motives, décorative
works etc.).
The ways of realization of works of Visual art in
housing complexes brings evidence to changes in the
conception of spatio-compositional and forming prin-
cipes in course of the passed years. In analyzing their
spatial corrélations one may observe close relation-
ship of the compositional principles in planning, ar-
chitecture and fine arts as well. In the first half of
the fifties the systém of the location of works of art
in the complex was subjected to the urbanistic rhythm
of the dominants and subdominants in a firm geo-

metrical scheme. The mutual relationship between
architecture and a work of art may be evaluated as
relaitively static one: architecture comiprehended a
work of art as “complément” suitable to enrich its
own qualifies. A frequent error of realizations of that
period was the tendency to illustrativeness in the le-
vel of the work of art and to decorativeness in rela-
tionship of architecture and the work of art itself. The
first realizations of dwelling complexes consisting of
houses of pre-fabricated panels brought an amount
of expérience that became the basis for further de-
velopment. Endeavours to restrain negative features
in mass-construction of flats lead to the tendency to
make the environment “human” by the way of addi-
tional incorporation of works of art and verdure.
Sculptural works often fulfilled their urbanistic func-
tion — they brought a fixed point to the space — an
element of orientation, différentiation and particula-
rity. Düring the sixties, tendencies occur directed
towards a complex compréhension of environmental
formation and a dynamic compréhension of space,
which get stronger with the time (and characterize
the formation of environment up to the present time).
The urbanistic layout dealis with an ever growing
repertory of means. It forms a systém of dominants
and subdominants based on a dynamic pénétration
and linkage of the spaces that are to détermine, orien-
tate, differentiate and specify. The repertory of forms
of constructive éléments develops and simultaneously
the architectural expression becomes richer. Works
of art are being incorporated into the systém of arti-
culation and hierarchization of different areas, parts
of the whole; they take part in forming their spécifie
spatial character and at the same time they make
valid their own artistic qualifies. A work of art set
in a certain space represents in this sense a logical
culmination of the homogeneous formative conception
unfolded in ail levels of the formation of environ-
ment, i. e. in stage of planning, architecture and fine
arts in particular.