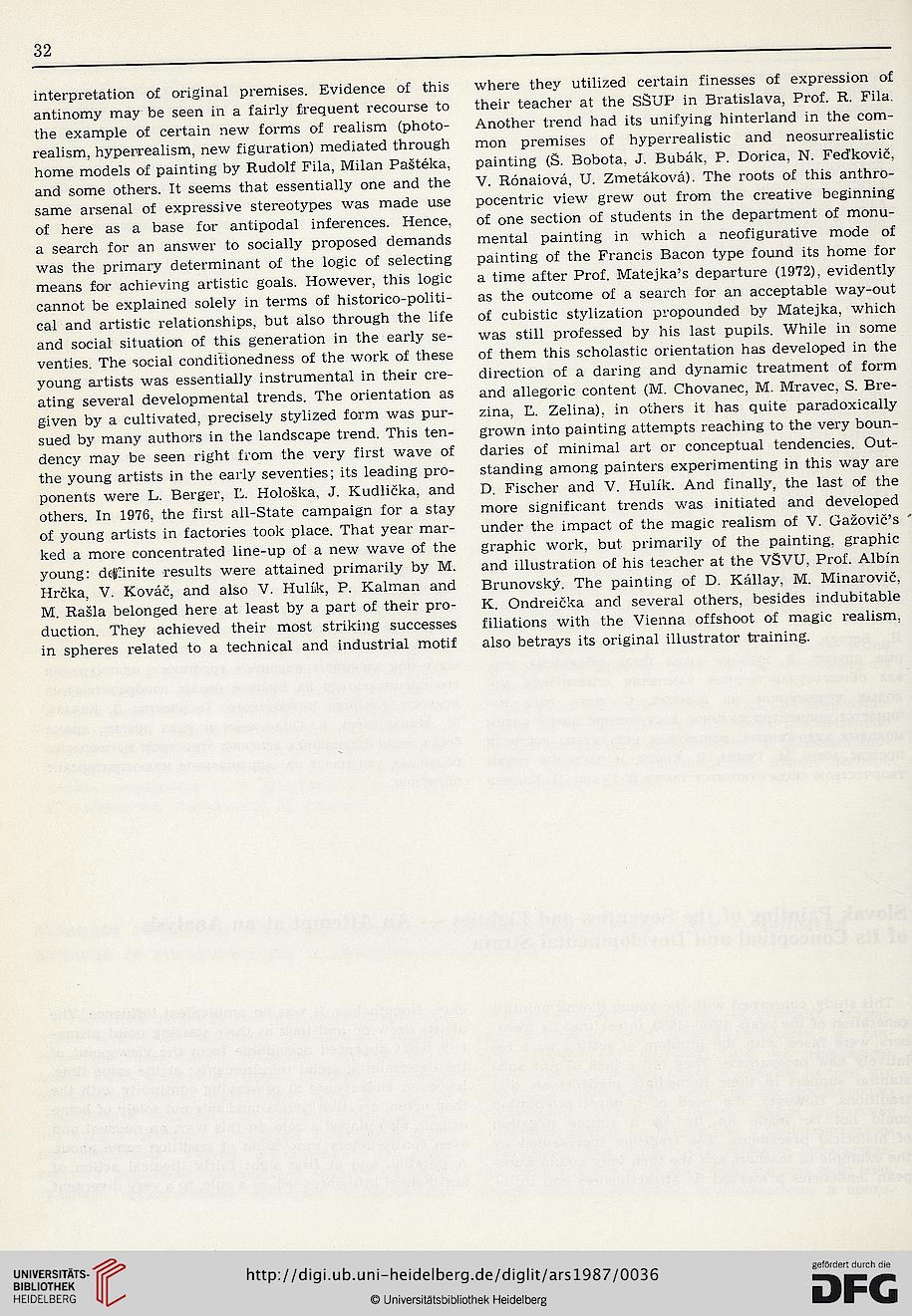 interprétation of original premises. Evidence of this
antinomy may be seen in a fairly frequent recourse to
the example of certain new forms of realism (photo-
realism, hyperrealism, new figuration) mediated through
home models of painting by Rudolf Fila, Milan Paštéka,
and some others. It seems that essentially one and the
same arsenal of expressive stereotypes was made use
of here as a base for antipodal inferences. Hence,
a search for an answer to socially proposed demands
was the primary determinant of the logic of selecting
means for achieving artistic goals. However, this logic
cannot be explained solely in terms of historico-politi-
cal and artistic relationships, but also through the life
and social situation of this génération in the early se-
venties. The social conditionedness of the work of these
young artists was essentially instrumental in their cre-
ating several developmental trends. The orientation as
given by a cultivated, precisely stylized form was pur-
sued by many authors in the landscape trend. This ten-
dency may be seen right from the very first wave of
the young artists in the early seventies; its leading pro-
ponents were L. Berger, IL. Hološka, J. Kudlička, and
others. In 1976, the first all-State campaign for a stay
of young artists in factories took place. That year mar-
ked a more concentrated line-up of a new wave of the
young: divinité results were attained primarily by M.
Hrčka, V. Kováč, and also V. Hulítk, P. Kalman and
M. Rašla belonged here at least by a part of their pro-
duction. They achieved their most striking successes
in spheres related to a technical and industrial motif

where they utilized certain finesses of expression of
their teacher at the SŠUP in Bratislava, Prof. R. Fila.
Another trend had its unifying hinterland in the com-
mon premises of hyperrealistic and neosurrealistic
painting (Š. Bobota. J. Bubák, P. Dorica, N. Feďkovič,
V. Rónaiová, U. Zmetáková). The roots of this anthro-
pocentric view grew out from the Creative beginning
of one section of students in the department of monu-
mental painting in which a neofigurative mode of
painting of the Francis Bacon type found its home for
a time after Prof. Matejka's departure (1972), evidently
as the outcome of a search for an acceptable way-out
of cubistic stylization propounded by Matějka, which
was still professed by his last pupils. While in some
of them this scholastic orientation has developed in the
direction of a daring and dynamic treatment of form
and allégorie content (M. Chovanec, M. Mravec, S. Bre-
zina, IL. Zelina), in others it has quite paradoxically
grown into painting attempts reaching to the very boun-
daries of minimal art or conceptual tendencies. Out-
standing among painters experimenting in this way are
D. Fischer and V. Huiík. And finally, the last of the
more significant trends was initiated and developed
under the impact of the magie realism of V. Gažovič's '
graphie work, but primarily of the painting, graphie
and illustration of his teacher at the VŠVU, Prof. Albín
Brunovský. The painting of D. Kállay, M. Minarovič,
K. Ondreička and several others, besides indubitable
filiations with the Vienna offshoot of magic realism,
also betrays its original illustrator training.