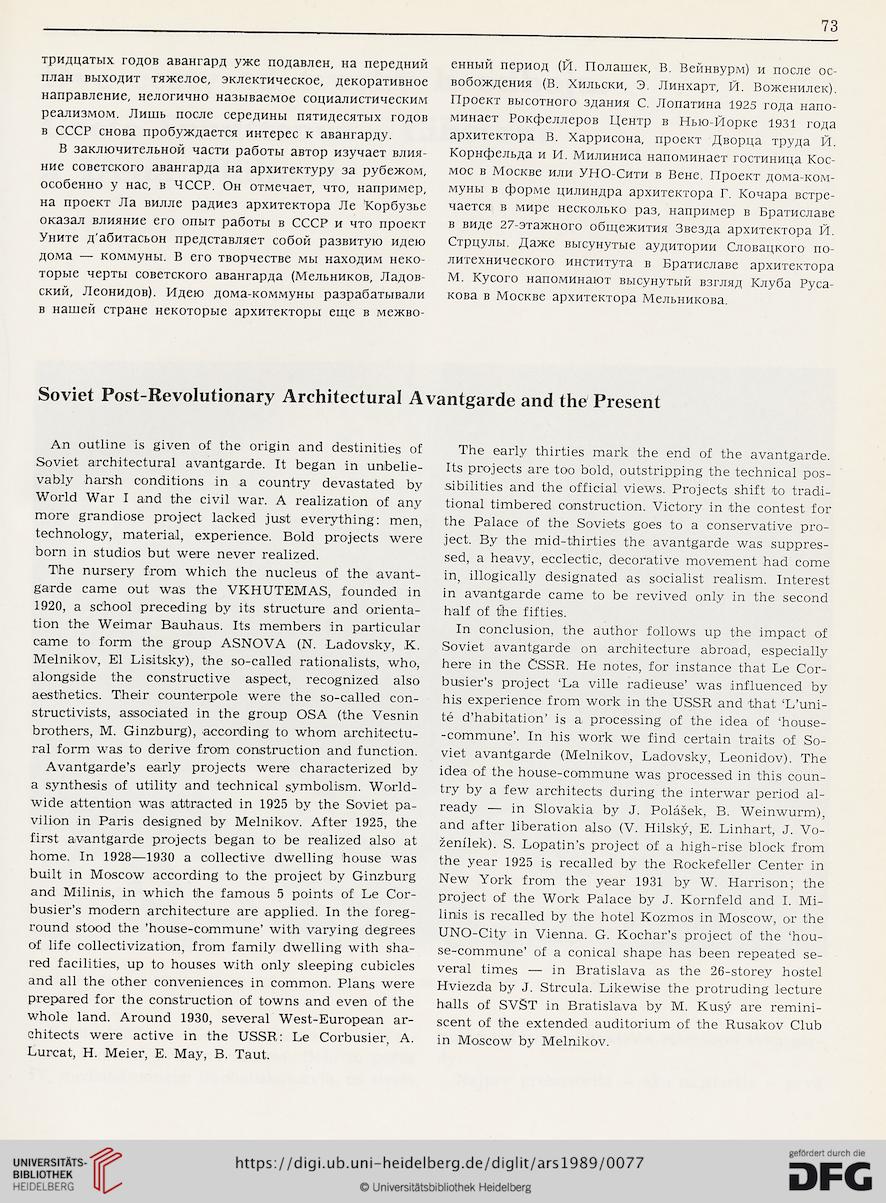 An outline is given of the origin and destinities of
Soviet architectural avantgardě. It began in unbelie-
vably harsh conditions in a country devastated by
World War I and the civil war. A realization of any
more grandiose project lacked just everything: men,
technology, material, expérience. Bold projects were
born in studios but were never realized.
The nursery from which the nucléus of the avant-
garde came out was the VKHUTEMAS, founded in
1920, a school preceding by its structure and orienta-
tion the Weimar Bauhaus. Its members in particular
came to form the group ASNOVA (N. Ladovsky, K.
Melnikov, El Lisitsky), the so-called rationalists, who,
alongside the constructive aspect, recognized also
aesthetics. Their counterpole were the so-called con-
structivists, associated in the group OSA (the Vesnin
brothers, M. Ginzburg), according to whom architectu-
ral form was to dérivé from construction and function.
Avantgarde’s early projects were characterized by
a synthesis of utility and technical symbolism. World-
wide attention was attracted in 1925 by the Soviet pa-
villon in Paris designed by Melnikov. After 1925, the
first avantgardě projects began to be realized also at
home. In 1928—1930 a collective dwelling house was
built in Moscow according to the project by Ginzburg
and Milinis, in which the famous 5 points of Le Cor-
busier’s modem architecture are applied. In the foreg-
round stood the ’house-commune’ with varying degrees
of life collectivization, from family dwelling with sha-
red facilities, up to houses with only sleeping cubicles
and all the other conveniences in common. Plans were
prepared for the construction of towns and even of the
whole land. Around 1930, several West-European ar-
ehitects were active in the USSR: Le Corbusier, A.
Lurcat, H. Meier, E. May, B. Taut.

The early thirties mark the end of the avantgardě.
Its projects are too bold, outstripping the technical pos-
sibilities and the official views. Projects shift to tradi-
tional timbered construction. Victory in the contest for
the Palace of the Soviets goes to a conservative Pro-
ject. By the mid-thirties the avantgardě was suppres-
sed, a heavy, ecclectic, décorative movement had corne
in, illogically designated as socialist realism. Interest
in avantgardě came to be revived only in the second
half of the fifties.
In conclusion, the author follows up the impact of
Soviet avantgardě on architecture abroad, especially
here in the CSSR. He notes, for instance that Le Cor-
busier’s project ‘La ville radieuse’ was influenced by
his expérience from work in the USSR and that ‘L’uni-
té d’habitation’ is a Processing of the idea of ‘house-
-commune’. In his work we find certain traits of So-
viet avantgardě (Melnikov, Ladovsky, Leonidov). The
idea of the house-commune was processed in this coun-
try by a few architects during the interwar period al-
ready — in Slovakia by J. Polášek, B. Weinwurm),
and after libération also (V. Hilský, E. Linhart, J. Vo-
ženílek). S. Lopatin’s project of a high-rise block from
the year 1925 is recalled by the Rockefeller Center in
New York from the year 1931 by W. Harrison; the
Project of the Work Palace by J. Kornfeld and I. Mi-
linis is recalled by the hotel Kozmos in Moscow, or the
UNO-City in Vienna. G. Kochar’s project of the ‘hou-
se-commune’ of a conical shape has been repeated se-
veral times — in Bratislava as the 26-storey hostel
Hviezda by J. Strcula. Likewise the protruding lecture
halls of SVŠT in Bratislava by M. Kusý are remini-
scent of the extended auditorium of the Rusakov Club
in Moscow by Melnikov.