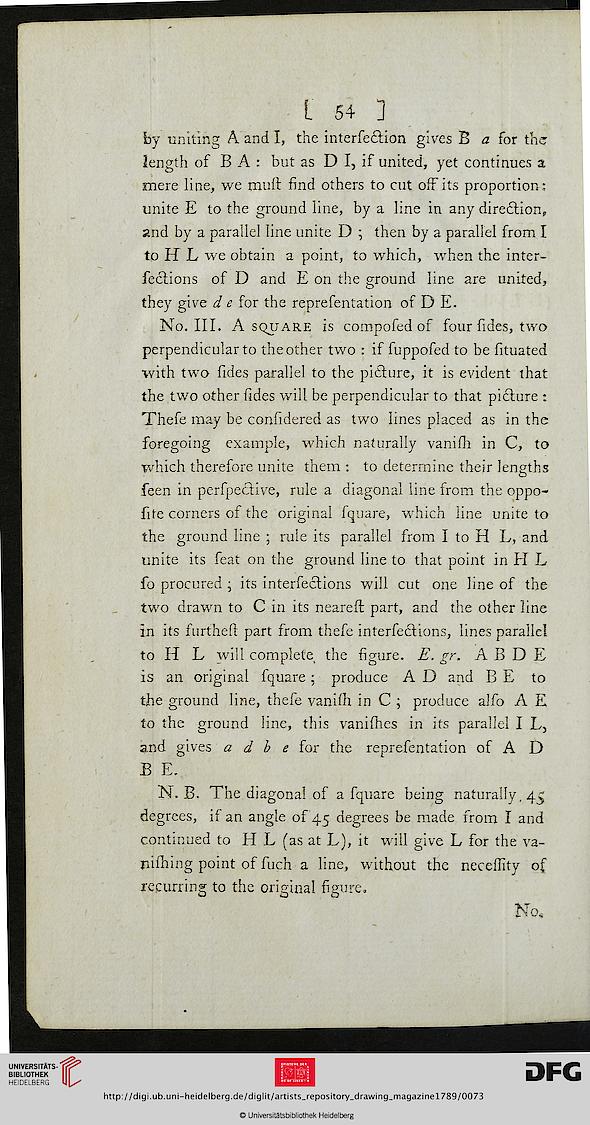 Information about OCR text
L 54 3
by uniting A and I, the intersefftion gives B a for the
length of B A : but as D I, if united, yet continues a
mere line, we mull find others to cut off its proportion:
unite E to the ground line, by a line in any direction,
and by a parallel line unite D ; then by a parallel from I
toHL we obtain a point, to which, when the inter-
seclions of D and E on the ground line are united,
they give d e for the representation of D E.
No. HE A square is composed of four Tides, two
perpendicular to the other two : if supposed to be situated
with two Tides parallel to the picture, it is evident that
the two other sides will be perpendicular to that picture :
These may be considered as two lines placed as in the
foregoing example, which naturally vanish in C, to
which therefore unite them : to determine their lengths
seen in perspective, rule a diagonal line from the oppo-
sife corners of the original square, which line unite to
the ground line ; rule its parallel from I to H L, and
unite its seat on the ground line to that point in H L
so procured; its interseclions will cut one line of the
two drawn to C in its nearest part, and the other line
in its furthesl part from these interseclions, lines parallel
to H L will complete the figure. E. gr. A B D E
is an original square; produce A D and BE to
the ground line, these vanilh in C ; produce also A E
to the ground line, this vanishes in its parallel I L,
and gives a d b e for the representation of A D
B E.
N. B. The diagonal of a square being naturally, 44
degrees, if an angle of 45 degrees be made srom I and
continued to H L (as at L), it will give L for the va-
jiishing point of such a line, without the necessity of
recurring to the original figure.
No*