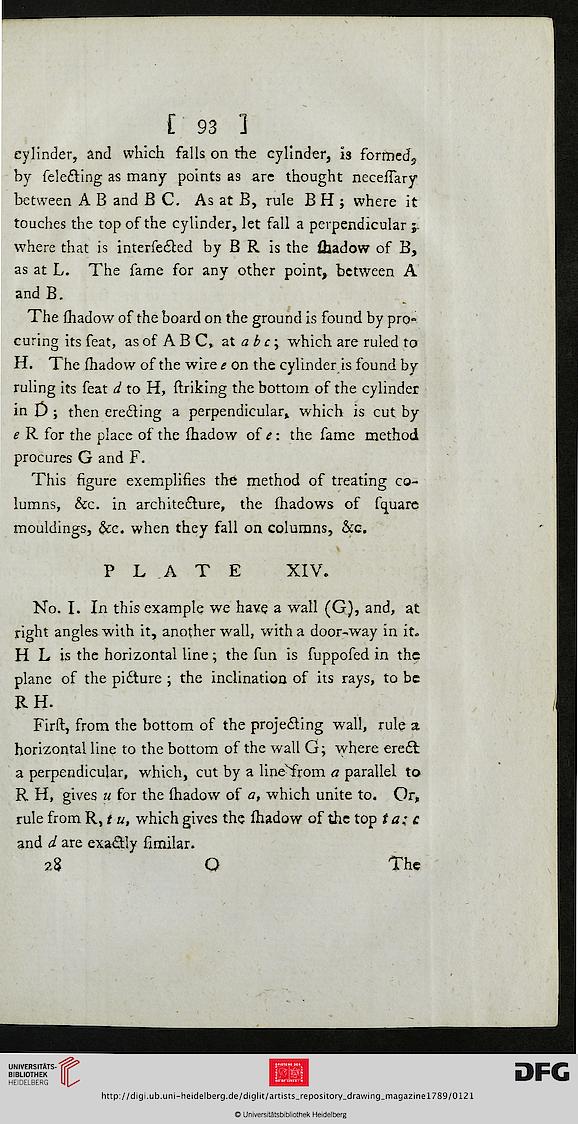 Information about OCR text
[ 93 ]
cylinder, and which falls on the cylinder, 13 formed,
by sele&ing as many points as are thought necessary
between A B and B C. As at B, rule B H ; where it
touches the top of the cylinder, let fall a perpendicular ;
where that is intersered by B R is the (hadow of B,
as at L. The same for any other point, between A
and B,
The shadow of the board on the ground is found by pro-
curing its seat, as of A B C, at a b c; which are ruled to
H. The shadow of the wire e on the cylinder is found by
ruling its seat d to H, striking the bottom of the cylinder
in D ; then eredfing a perpendicular, which is cut by
e R for the place of the shadow of e: the same method
procures G and F.
This figure exemplifies the method of treating co-
lumns, &c. in architedlure, the shadows of square
mouldings, &c. when they fall on columns, &c.
PLATE XIV.
No. I. In this example we have a wall (G), and, at
right angles with it, another wall, with a door-way in it»
H L is the horizontal line; the sun is supposed in the
plane of the pidture ; the inclination of its rays, to be
RH.
First, from the bottom of the projedting wall, rule a
horizontal line to the bottom of the wall G; where eredt
a perpendicular, which, cut by a lineTrom a parallel to
R H, gives u for the shadow of a, which unite to. Or,
rule from R, t u, which gives the shadow of the top t a; c
and d are exadtly similar.
28 O