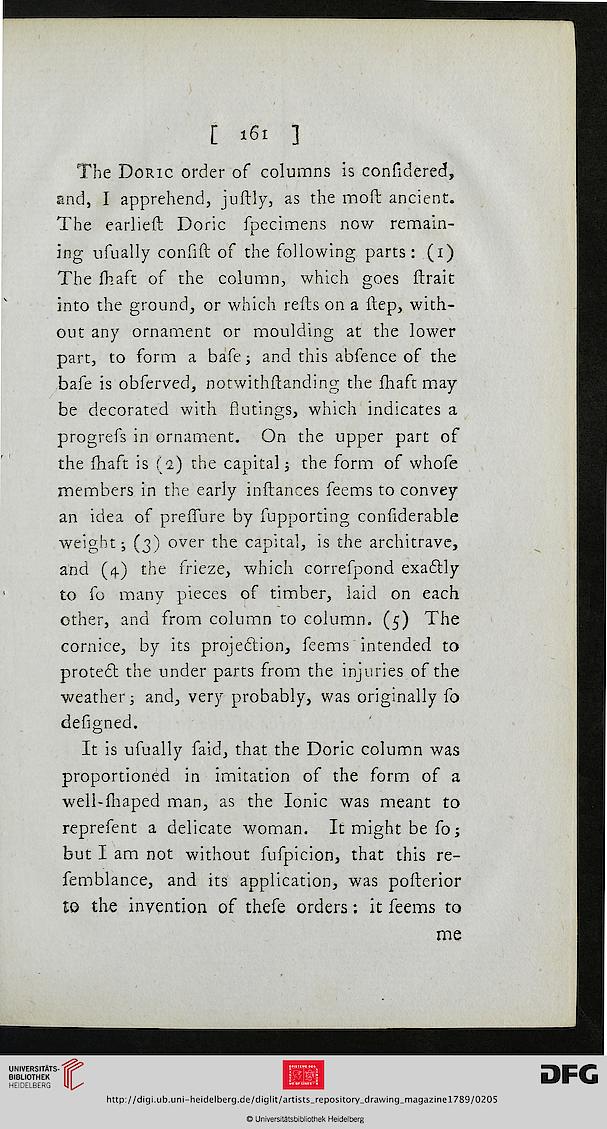 Information about OCR text
C 161 ]
The Doric order of columns is considered,
and, I apprehend, justly, as the molt ancient.
The earliest Doric specimens now remain-
ing usually consist of the following parts: (i)
The shaft of the column, which goes strait
into the ground, or which rests on a hep, with-
out any ornament or moulding at the lower
part, to form a base; and this absence of the
base is observed, notwithstanding the shaft may
be decorated with flutings, which indicates a
progress in ornament. On the upper part of
the shaft is (a) the capital •, the form of whose
members in the early instances seems to convey
an idea of pressure by supporting considerable
weighty (3) over the capital, is the architrave,
and (4.) the frieze, which correspond exaCtly
to so many pieces os timber, laid on each
other, and from column to column. (5) The
cornice, by its projection, seems intended to
proteCt the under parts from the injuries of the
weather ■, and, very probably, was originally so
designed.
It is usually said, that the Doric column was
proportioned in imitation of the form of a
well-shaped man, as the Ionic was meant to
represent a delicate woman. It might be so;
but I am not without suspicion, that this re-
semblance, and its application, was posterior
to the invention of these orders: it seems to