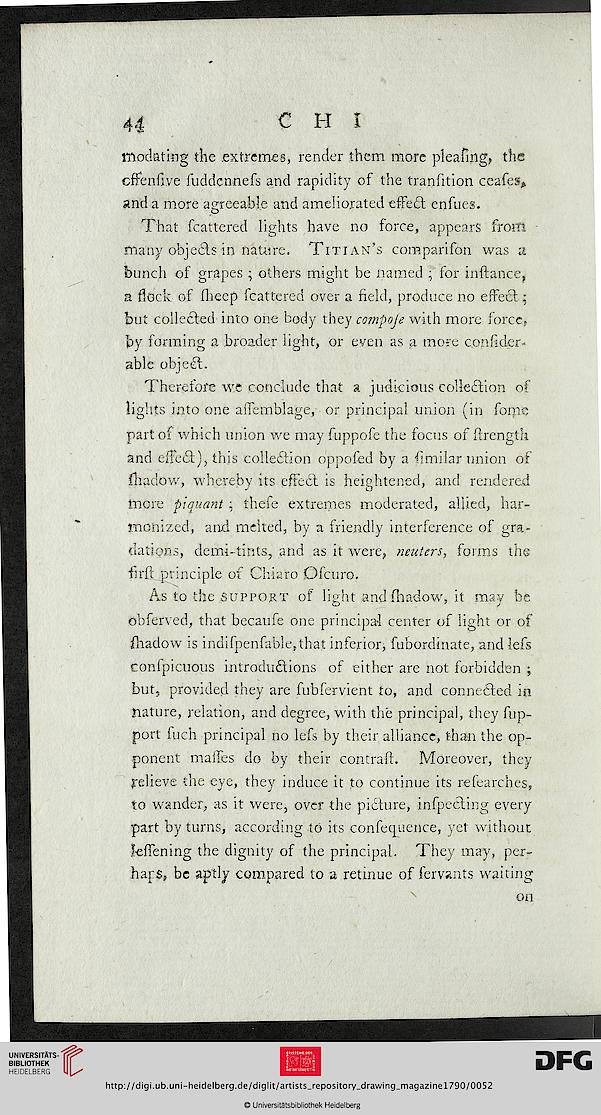 That fcattered lights have no force, appears from
many objects in nature. Titian's comparifon was a
bunch of grapes ; others might be named :; for inftance,
a flock of fheep fcattered over a field, produce no effect;
but collected into one body they compoje with more force,
by forming a broader light, or even as a more confider-
able object.

Therefore we conclude that a judicious collection of
lights into one affemblage, or principal union (in forne
part of which union we may fuppofe the focus of ftrength
and effeel:), this collection oppofed by a fimilar union of
fhadow, whereby its effect is heightened, and rendered
more piquant ; thefe extremes moderated, allied, har-
monized, and melted, by a friendly interference of gra-
dations, demi-tints, and as it were, neuters, forms the
firft principle of Chiaro Dfcuro.

As to the Support of light and fhadow, it may be
obferved, that becaufe one principal center of light or of
fhadow is indifpenfable.that inferior, fubordinate, and lefs
confpicuous introductions of either are not forbidden ;
but, provided they are fubfervient to, and connected in
nature, relation, and degree, with the principal, they fup-
port fuch principal no lefs by their alliance, than the op-
ponent maffes do by their contraft. Moreover, they
Relieve the eye, they induce it to continue its refearches,
to wander, as it were, over the picture, infpecfing every
part by turns, according to its confequence, yet without
leffening the dignity of the principal. They may, per-
haps, be aptly compared to a retinue of fervants waiting