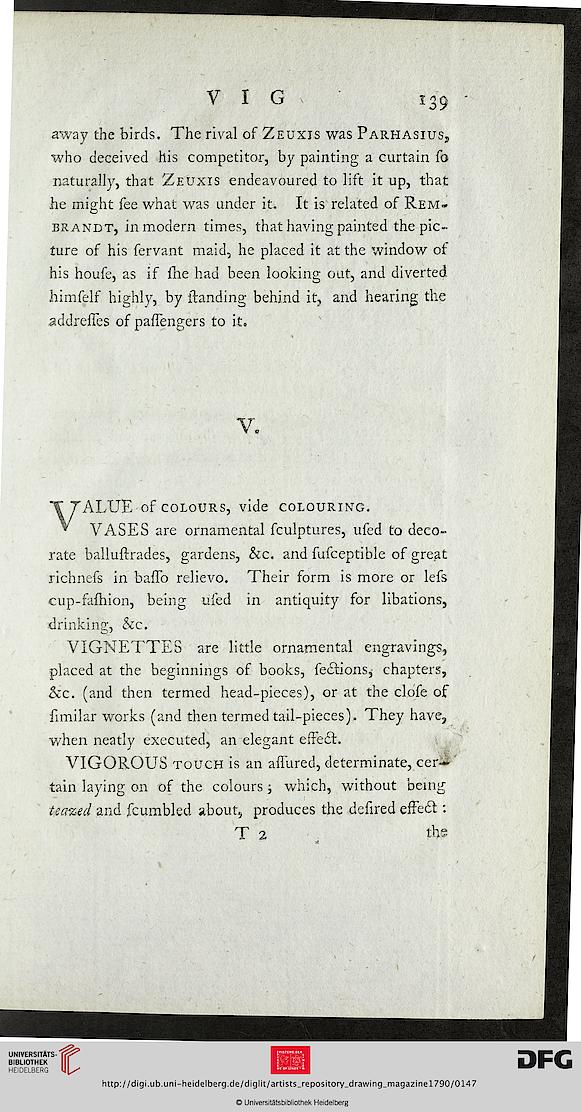 away the birds. The rival of Zeuxis was Parhasius,
who deceived his competitor, by painting a curtain fo
naturally, that Zeuxis endeavoured to lift it up, that
he might fee what was under it. It is related of Rem-
brandt, in modern times, that having painted the pic-
ture of his fervant maid, he placed it at the window of
his houfe, as if fhe had been looking out, and diverted
himfelf highly, by {landing behind it, and hearing the
addreffes of paflengers to it.

* VASES are ornamental fculptures, ufed to deco-
rate balluftrades, gardens, &c. and fufceptible of great
richnefs in baffo relievo. Their form is more or lefs
cup-fafhion, being ufed in antiquity for libations,
■drinking, &c.

VIGNETTES are little ornamental engravings,
placed at the beginnings of books, feclionsj chapters,
&c. (and then termed head-pieces), or at the clofe of
fimilar works (and then termed tail-pieces). They have.,
when neatly executed, an elegant effecl:.

VIGOROUS touch is an afiured, determinate, cefli
tain laying on of the colours ; which, without being
Ua%ed and fcumbled about, produces the defired effect :