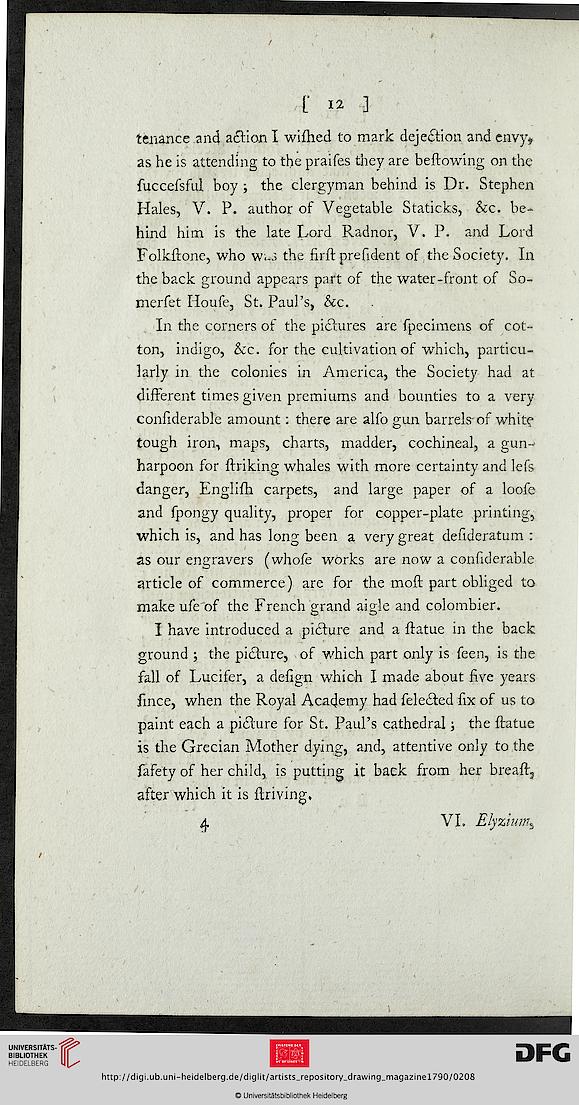 tenance and action I wifhed to mark deje£tion and envy*
as he is attending to the praifes they are beftowing on the
fuccefsful boy ; the clergyman behind is Dr. Stephen
Hales, V. P. author of Vegetable Staticks, &c. be-
hind him is the late Lord P.adnor, V. P. and Lord
Folkftone, who Wo the firft prefident of the Society. In
the back ground appears part of the water-front of So-
merfet Houfe, St. Paul's, Sec.

In the corners of the pictures are fpecimens of cot-
ton, indigo, Sec. for the cultivation of which, particu-
larly in the colonies in America, the Society had at
different times given premiums and bounties to a very
conhderable amount: there are alfo gun barrels of white
tough iron, maps, charts, madder, cochineal, a gun-*
harpoon for ftriking whales with more certainty and lefs
danger, Englifh carpets, and large paper of a loofe
and fpongy quality, proper for copper-plate printing,
which is, and has long been a very great delideratum :
as our engravers (whofe works are now a confiderable
article of commerce) are for the moft part obliged to
make ufe of the French grand aigle and colombier.

I have introduced a picture and a ftatue in the back
ground ; the picture, of which part only is feen, is the
fall of Lucifer, a defign which I made about five years
fmce, when the Royal Academy had fele£led fix of us to
paint each a piclure for St. Paul's cathedral; the ftatue
is the Grecian Mother dying, and, attentive only to the
fafety of her child, is putting it back from her breaft,
after which it is thriving.