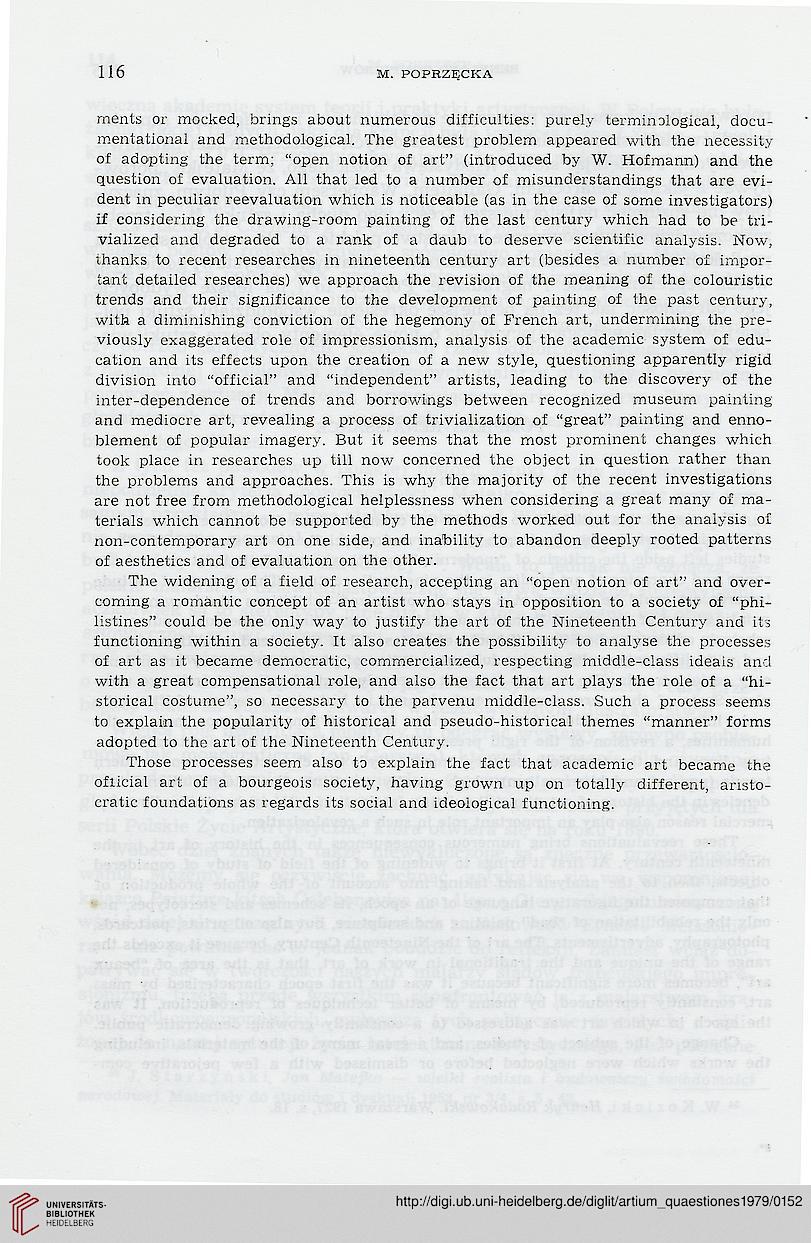 ments or mocked, brings about numerous difficulties: purely termin ological, docu-
mentational and methodological. The greatest problem appeared with the necessity
of adopting' the term; “open notion of art” (introduced by W. Hofmann) and the
ąuestion of eyaluation. Ali that led to a number of misunderstandings that are evi-
dent in peculiar reevaluation which is noticeable (as in the case of some investigators)
if considering the drawing-room painting of the last century which had to be tri-
yialized and degraded to a rank of a daub to deserve scientific analysis. Now,
thanks to reeent researches in nineteenth century art (besides a number of impor-
tant detailed researches) we approach the revision of the meaning of the colouristic
trends and their significance to the development of painting of the past century,
with a diminishing convietion of the hegemony of French art, undermining the pre-
viously exaggerated role of impressionism, analysis of the academic system of edu-
cation and its effects upon the creation of a new style, ąuestioning apparently rigid
division into “official” and “independent” artists, leading to the discovery of the
inter-dependence of trends and borrowings between recognized museum painting
and mediocre art, reyealing a process of trivialization of “great” painting and enno-
blement of popular imagery. But it seems that the most prominent changes which
took place in researches up till now concerned the object in ąuestion rather than
the problems and approaches. This is why the majority of the reeent investigations
are not free from methodological helplessness when considering a great many of ma-
terials which cannot be supported by the methods worked out for the analysis of
non-contemporary art on one side, and inability to abandon deeply rooted patterns
of aesthetics and of evaluation on the other.

The widening of a field of research, accepting an “open notion of art” and over-
corning a romantic concept of an artist who stays in opposition to a society of “phi-
listines” could be the only way to justify the art of the Nineteenth Century and its
functioning within a society. It also creates the possibility to analyse the processes
of art as it became democratic, cornmercialized, respecting middle-class ideais and
with a great compensational role, and also the fact that art plays the role of a “hi-
storical costume”, so necessary to the parvenu middle-class. Such a process seems
to explain the popularity of historical and pseudo-historical themes “manner” forms
adopted to the art of the Nineteenth Century.

Those processes seem also to explain the fact that academic art became the
oflicial art of a bourgeois society, having grown up on totally different, aristo-
cratie foundations as regards its social and ideological functioning.