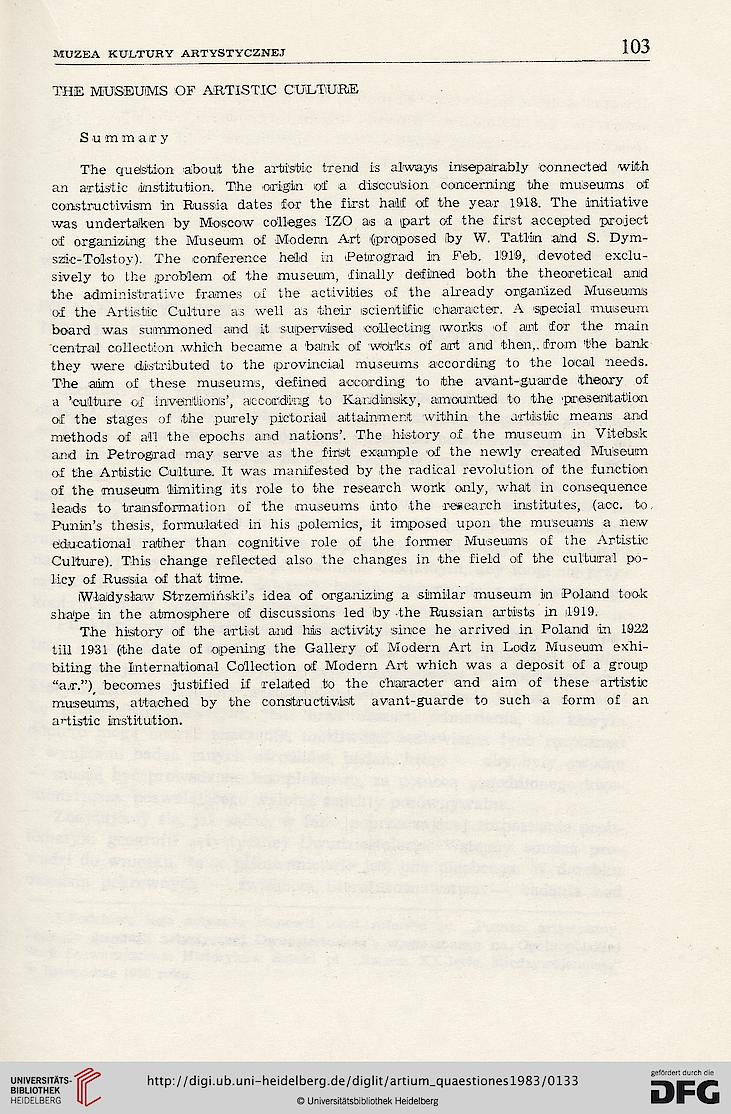 THE MUSEUMS OF ARTISTIC CULTURE

S u m m a ir y
The question about the artistic trend is always inseparably 'connected with
an artistic institution. The origin iotf a disioculsion concerning the mulseums of
constructivism in Russia dates for the first half of the year 1918. The initiative
was undertaken by Moscow colleges IZO as a part of the first accepted project
of organizing the Museum of Modern Art ^proposed Iby W. Tatlim aind S. Dym-
szic-Tolstoy). The conference held in Petrograd in Feb. 11919, devoted exclu-
sively to the problem of the museum, finally defined both the theoretical and
the administrative frames of the activities of the already organized Museums
o-f the Artistic Culture as well as their scientific character. A 'special museum
board was summoned and it supervised collecting iworkis of art for the main
central collection which became a 'bank of wdttks Of art and than,, from the bank
they were distributed to the provincial museums according to the local needs.
The aim of these museums, defined according to the avant-guarde theory of
a ’culture of inventions’, according to Kandinsky, amounted to the 'presentation
of the stages of the purely pictorial attainment within the artistic means and
methods of all the epochs and nations’. The history of the museum in Vitebsk
and in Petrograd may serve as the first example 'of the newly created Museum
of the Artistic Culture. It was manifested by the radical revolution of the function
of the museum limiting its role to the research work only, what in consequence
leads to transformation of the museums into the research institutes, (aoc. to,
Punin’s thesis, formulated in his polemics, it imposed upon the museums a new
educational rather than cognitive role of the former Museums of the Artistic
Culture). This change reflected also the changes in 'the field of the cultural po-
licy of Russia of that time.
iWladystew Strzemirisiki’s idea of organizing a similar museum in Poland took
shape in the atmosphere of discussions led by the Russian artists in 1919.
The history of the artist and has activity since he arrived in Poland 'in 1922
till 1931 (the date of opening the Gallery of Modern Art in Lodz Museum exhi-
biting the lint er national Collection of Modern Art which was a deposit of a group
“ajr.”)_ becomes justified if related to the character and aim of these artistic
museums, attached by the constructivist avant-guarde to such a form of an
artistic institution.