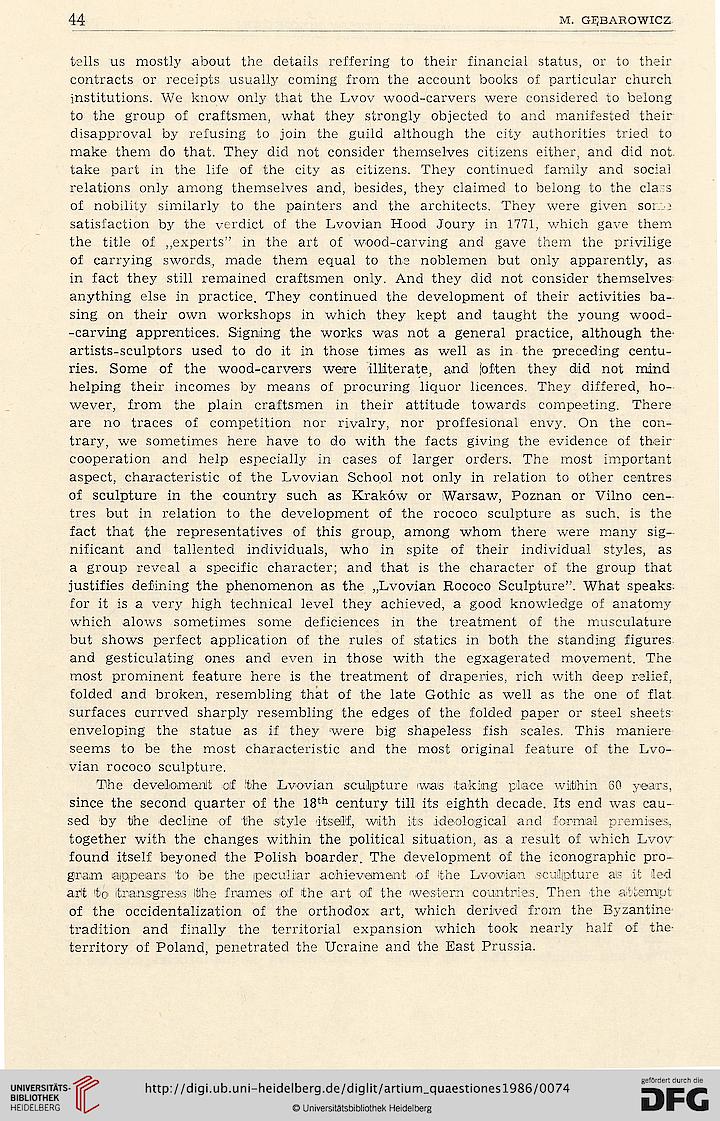 tells us mostly about the details reffering to their financial status, or to their
contracts or receipts usually coming from the account books of particular church
institutions. We know only that the Lvov wood-carvers were considered to belong
to the group of craftsmen, what they strongly objected to and manifested their
disapproval by refusing to join the guild although the city authorities tried to
make them do that. They did not consider themselves citizens either, and did not.
take part in the life of the city as citizens. They continued family and social
relations only among themselves and, besides, they claimed to belong to the cla s
of nobility similarly to the painters and the architects. They were given some
satisfaction by the verdict of the Lvovian Hood Joury in 1771, which gave them
the title of „experts” in the art of wood-carving and gave them the privilige
of carrying swords, made them equal to the noblemen but only apparently, as
in fact they still remained craftsmen only. And they did not consider themselves
anything else in practice. They continued the development of their activities ba-
sing on their own workshops in which they kept and taught the young wood-
-carving apprentices. Signing the works was not a general practice, although the-
artists-sculptors used to do it in those times as well as in the preceding centu-
ries. Some of the wood-carvers were illiterate, and [often they did not mind
helping their incomes by means of procuring liquor licences. They differed, ho-
wever, from the plain craftsmen in their attitude towards compeeting. There
are no traces of competition nor rivalry, nor proffesional envy. On the con-
trary, we sometimes here have to do with the facts giving the evidence of their
cooperation and help especially in cases of larger orders. The most important
aspect, characteristic of the Lvovian School not only in relation to other centres
of sculpture in the country such as Kraków or Warsaw, Poznan or Vilno cen-
tres but in relation to the development of the rococo sculpture as such, is the
fact that the representatives of this group, among whom there were many sig-
nificant and tallented individuals, who in spite of their individual styles, as
a group reveal a specific character; and that is the character of the group that
justifies defining the phenomenon as the „Lvovian Rococo Sculpture”. What speaks^
for it is a very high technical level they achieved, a good knowledge of anatomy
which alows sometimes some deficiences in the treatment of the musculature
but shows perfect application of the rules of statics in both the standing figures
and gesticulating ones and even in those with the egxagerated movement. The
most prominent feature here is the treatment of draperies, rich with deep relief,
folded and broken, resembling that of the late Gothic as well as the one of flat
surfaces currved sharply resembling the edges of the folded paper or steel sheets
enveloping the statue as if they were big shapeless fish scales. This maniere
seems to be the most characteristic and the most original feature of the Lvo-
vian rococo sculpture.
Tthe deveiiOimanJt oif ffche Lvovian sculpture iwiais taking place wiitlhin SO years,
since the second quarter of the 18th century till its eighth decade. Its end was cau-
sed by the 'decline of the style itself, with its ideological and formal premises,,
together with the changes within the political situation, as a result of which Lvov
found itself beyoned the Polish boarder. The development of the iconographic pro-
gram appears to be the peculiar achievement of the Lvovian seulipture als it led
art to transgress the frames of the art of the western countries. Then the attempt
of the occidentalization of the orthodox art, which derived from the Byzantine
tradition and finally the territorial expansion which took nearly half of the-
territory of Poland, penetrated the Ucraine and the East Prussia.