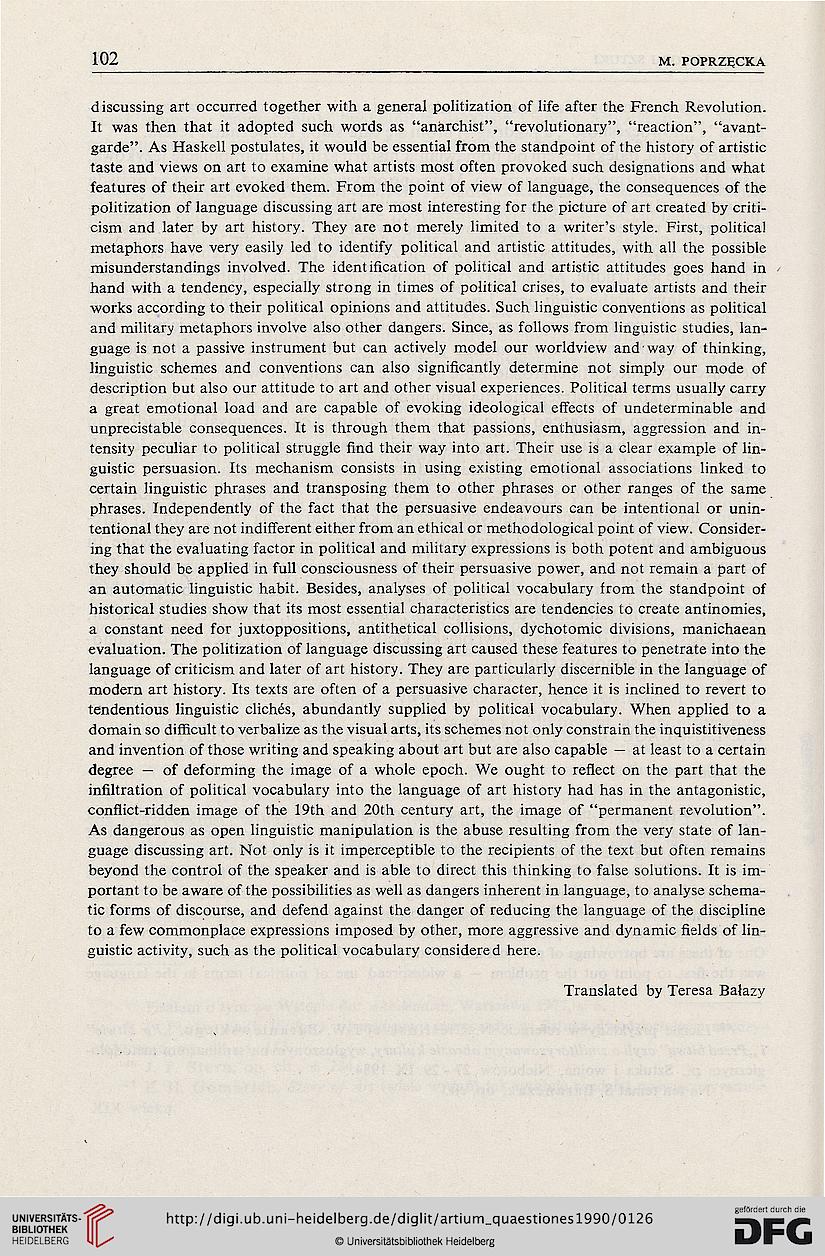 discussing art occurred together with a general politization of life after the French Revolution.
It was then that it adopted such words as “anarchist”, “revolutionary”, “reaction”, “avant-
garde”. As Haskell postulates, it would be essential from the standpoint of the history of artistic
taste and views on art to examine what artists most often provoked such designations and what
features of their art evoked them. From the point of view of language, the conseąuences of the
politization of language discussing art are most interesting for the picture of art created by criti-
cism and later by art history. They are not merely limited to a writer’s style. First, political
metaphors have very easily led to identify political and artistic attitudes, with all the possible
misunderstandings involved. The identification of political and artistic attitudes goes hand in
hand with a tendency, especially strong in times of political crises, to evaluate artists and their
works according to their political opinions and attitudes. Such linguistic conventions as political
and military metaphors involve also other dangers. Since, as follows from linguistic studies, lan-
guage is not a passive instrument but can actively model our worldview and way of thinking,
linguistic schemes and conventions can also significantly determine not simply our mode of
description but also our attitude to art and other visual experiences. Political terms usually carry
a great emotional load and are capable of evoking ideological effects of undeterminable and
unprecistable conseąuences. It is through them that passions, enthusiasm, aggression and in-
tensity peculiar to political struggle find their way into art. Their use is a clear exampie of lin-
guistic persuasion. Its mechanism consists in using existing emotional associations linked to
certain linguistic phrases and transposing them to other phrases or other ranges of the same
phrases. Independently of the fact that the persuasive endeavours can be intentional or unin-
tentional they are not indifferent either from an ethical or methodological point of view. Consider-
ing that the evaluating factor in political and military expressions is both potent and ambiguous
they should be applied in full consciousness of their persuasive power, and not remain a part of
an automatic linguistic habit. Besides, analyses of political vocabulary from the standpoint of
historical studies show that its most essential characteristics are tendencies to create antinomies,
a constant need for juxtoppositions, antithetical collisions, dychotomic divisions, manichaean
evaluation. The politization of language discussing art caused these features to penetrate into the
language of criticism and later of art history. They are particularly discernible in the language of
modern art history. Its texts are often of a persuasive character, hence it is inclined to revert to
tendentious linguistic cliches, abundantly supplied by political vocabulary. When applied to a
domain so difficult to verbalize as the visual arts, its schemes not only constrain the inquistitiveness
and invention of those writing and speaking about art but are also capable — at least to a certain
degree — of deforming the image of a whole epoch. We ought to reflect on the part that the
infiltration of political vocabulary into the language of art history had has in the antagonistic,
conflict-ridden image of the 19th and 20th century art, the image of “permanent revolution”.
As dangerous as open linguistic manipulation is the abuse resulting from the very state of lan-
guage discussing art. Not only is it imperceptible to the recipients of the text but often remains
beyond the control of the speaker and is able to direct this thinking to false solutions. It is im-
portant to be aware of the possibilities as well as dangers inherent in language, to analyse schema-
tic forms of discourse, and defend against the danger of reducing the language of the discipline
to a few commonplace expressions imposed by other, more aggressive and dynamic fields of lin-
guistic actiyity, such as the political vocabulary considered here.