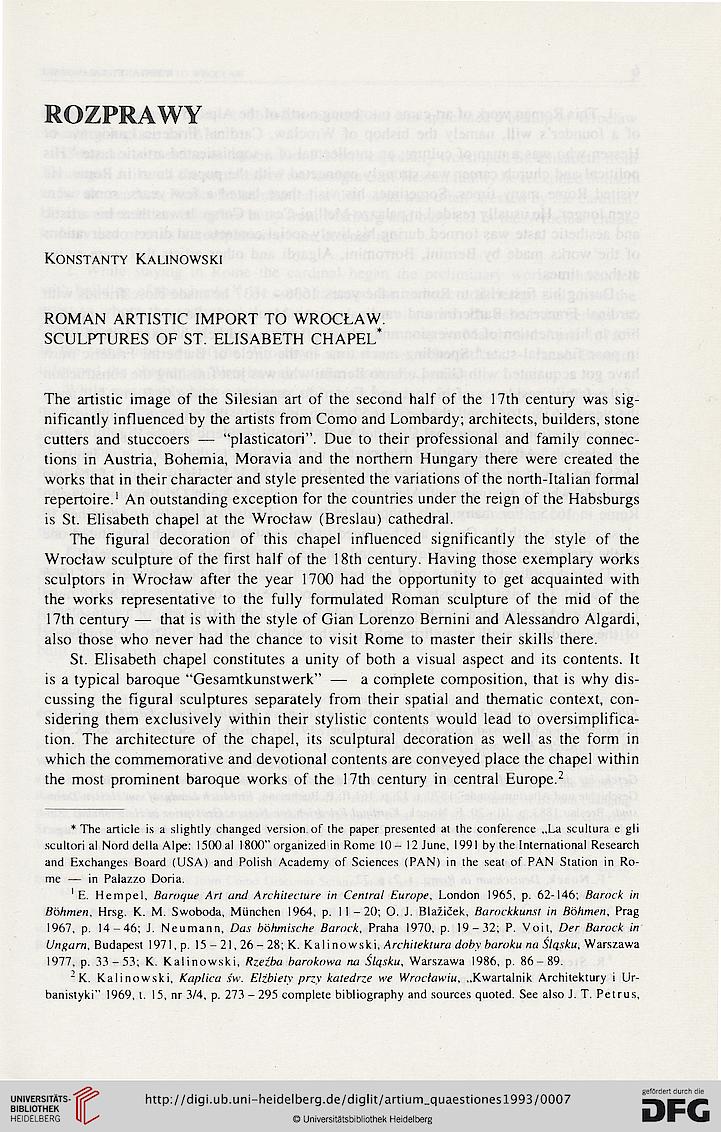 The artistic image of the Silesian art of the second half of the 17th century was sig-
nificantly influenced by the artists from Como and Lombardy; architects, builders, stone
cutters and stuccoers — “plasticatori”. Due to their professional and family connec-
tions in Austria, Bohemia, Moravia and the northern Hungary there were created the
works that in their character and style presented the variations of the north-Italian formal
repertoire.* 1 An outstanding exception for the countries under the reign of the Habsburgs
is St. Elisabeth chapel at the Wroclaw (Breslau) cathedral.
The figurai decoration of this chapel influenced significantly the style of the
Wroclaw sculpture of the first half of the 18th century. Having those exemplary works
sculptors in Wroclaw after the year 1700 had the opportunity to get acquainted with
the works representative to the fully formulated Roman sculpture of the mid of the
17th century — that is with the style of Gian Lorenzo Bernini and Alessandro Algardi,
also those who never had the chance to visit Rome to master their skills there.
St. Elisabeth chapel constitutes a unity of both a visual aspect and its contents. It
is a typical baroque “Gesamtkunstwerk” — a complete composition, that is why dis-
cussing the figurai sculptures separately from their spatial and thematic context, con-
sidering them exclusively within their stylistic contents would lead to oversimplifica-
tion. The architecture of the chapel, its sculptural decoration as well as the form in
which the commemorative and devotional contents are conveyed place the chapel within
the most prominent baroque works of the 17th century in central Europe.2