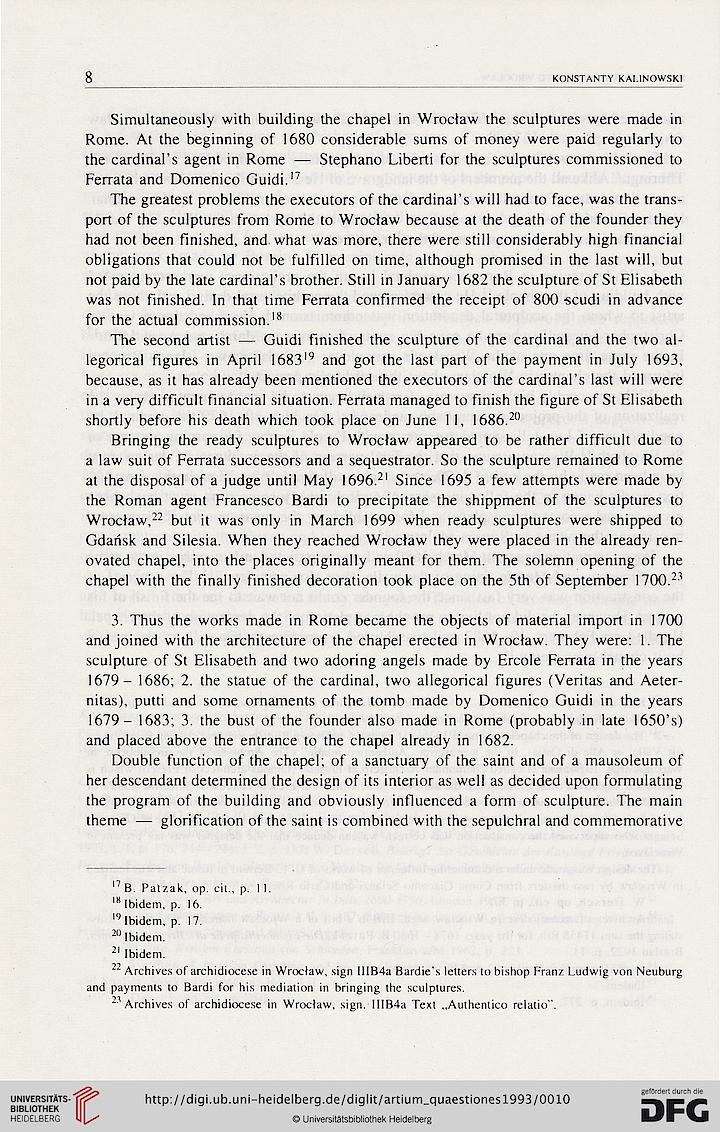 Simultaneously with building the chapel in Wrocław the sculptures were made in
Rome. At the beginning of 1680 considerable sums of money were paid regularly to
the cardinal’s agent in Rome — Stephano Liberti for the sculptures commissioned to
Ferrata and Domenico Guidi.17
The greatest problems the executors of the cardinal’s will had to face, was the trans-
port of the sculptures from Rome to Wrocław because at the death of the founder they
had not been finished, and what was more, there were still considerably high financial
obligations that could not be fulfilled on time, although promised in the last will, but
not paid by the late cardinal’s brother. Still in January 1682 the sculpture of St Elisabeth
was not finished. In that time Ferrata confirmed the receipt of 800 -scudi in advance
for the actual commission.18
The second artist — Guidi finished the sculpture of the cardinal and the two al-
legorical figures in April 168319 and got the last part of the payment in July 1693,
because, as it has already been mentioned the executors of the cardinal’s last will were
in a very difficult financial situation. Ferrata managed to finish the figure of St Elisabeth
shortly before his death which took place on June 11, 1686.20
Bringing the ready sculptures to Wrocław appeared to be rather difficult due to
a law suit of Ferrata successors and a sequestrator. So the sculpture remained to Rome
at the disposal of a judge until May 1696.21 Since 1695 a few attempts were made by
the Roman agent Francesco Bardi to precipitate the shippment of the sculptures to
Wrocław,22 but it was only in March 1699 when ready sculptures were shipped to
Gdansk and Silesia. When they reached Wrocław they were placed in the already ren-
ovated chapel, into the places originally meant for them. The solemn opening of the
chapel with the finally finished decoration took place on the 5th of September 1700.23
3. Thus the works made in Rome became the objects of material import in 1700
and joined with the architecture of the chapel erected in Wrocław. They were: 1. The
sculpture of St Elisabeth and two adoring angels made by Ercole Ferrata in the years
1679- 1686; 2. the statue of the cardinal, two allegorical figures (Veritas and Aeter-
nitas), putti and some ornaments of the tomb made by Domenico Guidi in the years
1679- 1683; 3. the bust of the founder also made in Rome (probably in late 1650’s)
and placed above the entrance to the chapel already in 1682.
Double function of the chapel; of a sanctuary of the saint and of a mausoleum of
her descendant determined the design of its interior as well as decided upon formulating
the program of the building and obviously influenced a form of sculpture. The main
theme — glorification of the saint is combined with the sepulchral and commemorative