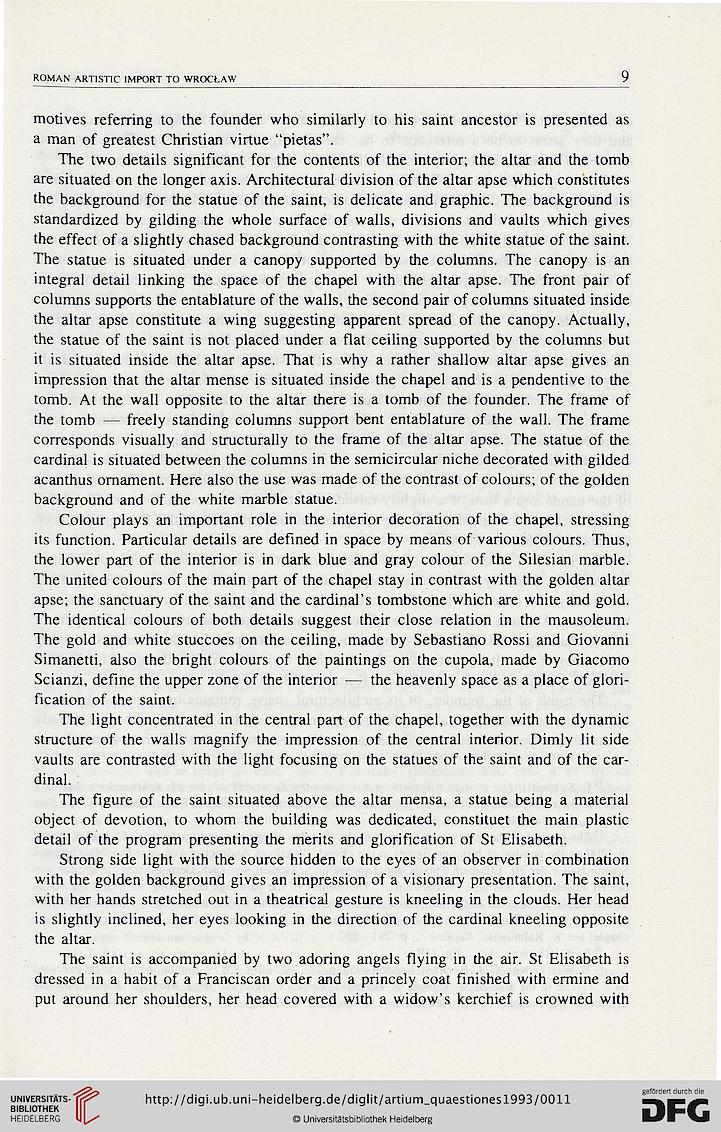 motives referring to the founder who similarly to his saint ancestor is presented as
a man of greatest Christian virtue “pietas”.
The two details significant for the contents of the interior; the altar and the tomb
are situated on the longer axis. Architectural division of the altar apse which constitutes
the background for the statue of the saint, is delicate and graphic. The background is
standardized by gilding the whole surface of walls, divisions and vaults which gives
the effect of a slightly chased background contrasting with the white statue of the saint.
The statue is situated under a canopy supported by the columns. The canopy is an
integral detail linking the space of the chapel with the altar apse. The front pair of
columns supports the entablature of the walls, the second pair of columns situated inside
the altar apse constitute a wing suggesting apparent spread of the canopy. Actually,
the statue of the saint is not placed under a flat ceiling supported by the columns but
it is situated inside the altar apse. That is why a rather shallow altar apse gives an
impression that the altar mense is situated inside the chapel and is a pendentive to the
tomb. At the wall opposite to the altar there is a tomb of the founder. The frame of
the tomb — freely standing columns support bent entablature of the wall. The frame
corresponds visually and structurally to the frame of the altar apse. The statue of the
cardinal is situated between the columns in the semicircular niche decorated with gilded
acanthus ornament. Here also the use was made of the contrast of colours; of the golden
background and of the white marble statue.
Colour plays an important role in the interior decoration of the chapel, stressing
its function. Particular details are defined in space by means of various colours. Thus,
the lower part of the interior is in dark blue and gray colour of the Silesian marble.
The united colours of the main part of the chapel stay in contrast with the golden altar
apse; the sanctuary of the saint and the cardinal’s tombstone which are white and gold.
The identical colours of both details suggest their close relation in the mausoleum.
The gold and white stuccoes on the ceiling, made by Sebastiano Rossi and Giovanni
Simanetti, also the bright colours of the paintings on the cupola, made by Giacomo
Scianzi, define the upper zone of the interior — the heavenly space as a place of glori-
fication of the saint.
The light concentrated in the central part of the chapel, together with the dynamic
structure of the walls magnify the impression of the central interior. Dimly lit side
vaults are contrasted with the light focusing on the statues of the saint and of the car-
dinal.
The figure of the saint situated above the altar mensa, a statue being a material
object of devotion, to whom the building was dedicated, constituet the main plastic
detail of the program presenting the merits and glorification of St Elisabeth.
Strong side light with the source hidden to the eyes of an observer in combination
with the golden background gives an impression of a visionary presentation. The saint,
with her hands stretched out in a theatrical gesture is kneeling in the clouds. Her head
is slightly inclined, her eyes looking in the direction of the cardinal kneeling opposite
the altar.
The saint is accompanied by two adoring angels flying in the air. St Elisabeth is
dressed in a habit of a Franciscan order and a princely coat finished with ermine and
put around her shoulders, her head covered with a widow’s kerchief is crowned with