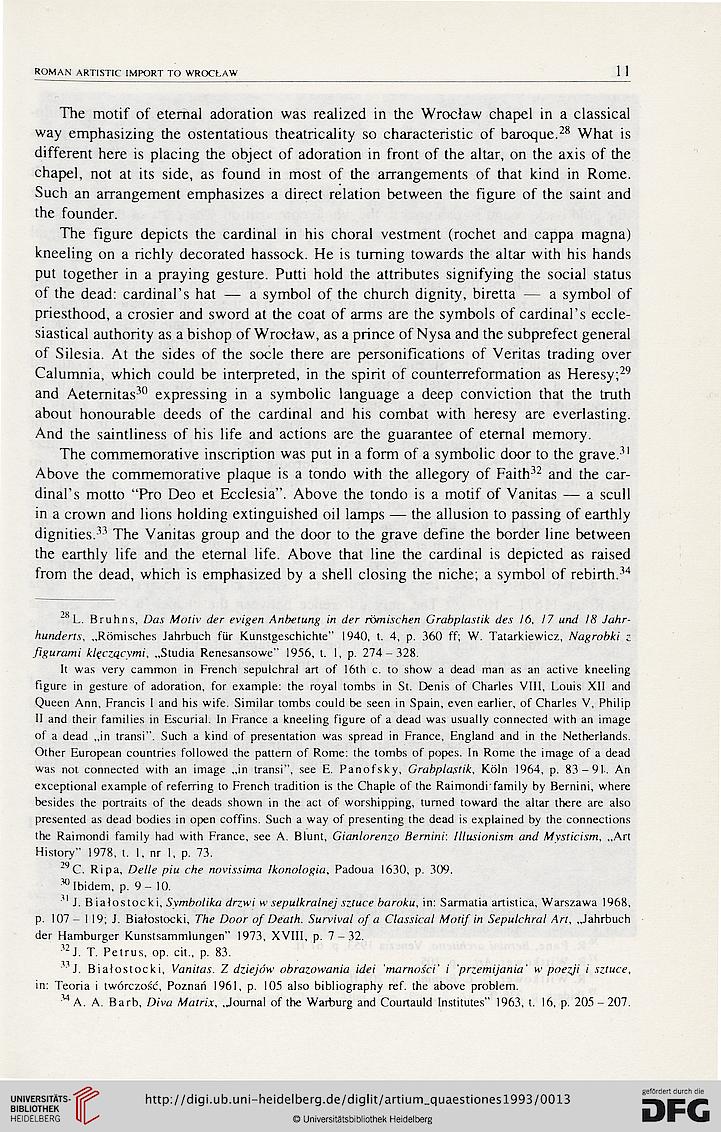 The motif of eternal adoration was realized in the Wrocław chapel in a classical
way emphasizing the ostentatious theatricality so characteristic of baroque.28 What is
different here is placing the object of adoration in front of the altar, on the axis of the
chapel, not at its side, as found in most of the arrangements of that kind in Rome.
Such an arrangement emphasizes a direct relation between the figure of the saint and
the founder.
The figure depicts the cardinal in his choral vestment (rochet and cappa magna)
kneeling on a richly decorated hassock. He is turning towards the altar with his hands
put together in a praying gesture. Putti hold the attributes signifying the social status
of the dead: cardinal’s hat — a symbol of the church dignity, biretta — a symbol of
priesthood, a crosier and sword at the coat of arms are the symbols of cardinal’s eccle-
siastical authority as a bishop of Wrocław, as a prince of Nysa and the subprefect general
of Silesia. At the sides of the socle there are personifications of Veritas trading over
Calumnia, which could be interpreted, in the spirit of counterreformation as Heresy;29
and Aetemitas30 expressing in a symbolic language a deep conviction that the truth
about honourable deeds of the cardinal and his combat with heresy are everlasting.
And the saintliness of his life and actions are the guarantee of eternal memory.
The commemorative inscription was put in a form of a symbolic door to the grave.31
Above the commemorative plaque is a tondo with the allegory of Faith32 and the car-
dinal’s motto “Pro Deo et Ecclesia”. Above the tondo is a motif of Vanitas — a scull
in a crown and lions holding extinguished oil lamps — the allusion to passing of earthly
dignities.33 The Vanitas group and the door to the grave define the border line between
the earthly life and the eternal life. Above that line the cardinal is depicted as raised
from the dead, which is emphasized by a shell closing the niche; a symbol of rebirth.34

2B L. Bruhns, Das Motiv der evigen Anbetung in der römischen Grabplastik des 16. 17 und 18 Jahr-
hunderts, „Römisches Jahrbuch für Kunstgeschichte” 1940, t. 4, p. 360 ff; W. Tatarkiewicz, Nagrobki z
figurami klęczącymi, „Studia Renesansowe” 1956, t. 1, p. 274-328.
It was very cammon in French sepulchral art of 16th c. to show a dead man as an active kneeling
Figure in gesture of adoration, for example: the royal tombs in St. Denis of Charles VIII, Louis XII and
Queen Ann, Francis I and his wife. Similar tombs could be seen in Spain, even earlier, of Charles V, Philip
II and their families in Escurial. In France a kneeling figure of a dead was usually connected with an image
of a dead „in transi”. Such a kind of presentation was spread in France, England and in the Netherlands.
Other European countries followed the pattem of Rome: the tombs of popes. In Rome the image of a dead
was not connected with an image „in transi”, see E. Panofsky, Grabplastik, Köln 1964, p. 83-91. An
exceptional example of referring to French tradition is the Chaple of the Raimondi family by Bernini, where
besides the portraits of the deads shown in the act of worshipping, turned toward the altar there are also
presented as dead bodies in open coffins. Such a way of presenting the dead is explained by the connections
the Raimondi family had with France, see A. Blunt, Gianlorenzo Bernini: Illusionism and Mysticism, „Art
History” 1978, t. 1, nr 1, p. 73.
29C. Ripa, Delle piu che novissima Ikonologia, Padoua 1630, p. 309.
30 Ibidem, p. 9 - 10.
31 J. Białostocki, Symbolika drzwi w sepulkralnej sztuce baroku, in: Sarmatia artistica, Warszawa 1968,
p. 107 - 1 19; J. Białostocki, The Door of Death. Survival of a Classical Motif in Sepulchral Art, „Jahrbuch
der Hamburger Kunstsammlungen” 1973, XVIII, p. 7-32.
32 J. T. Petrus, op. cit., p. 83.
33 J. Białostocki, Vanitas. Z dziejów obrazowania idei 'marności' i 'przemijania' w poezji i sztuce,
in: Teoria i twórczość, Poznań 1961, p. 105 also bibliography ref. the above problem.
34 A. A. Barb, Diva Matrix, .Journal of the Warburg and Courtauld Institutes” 1963, t. 16, p. 205-207.