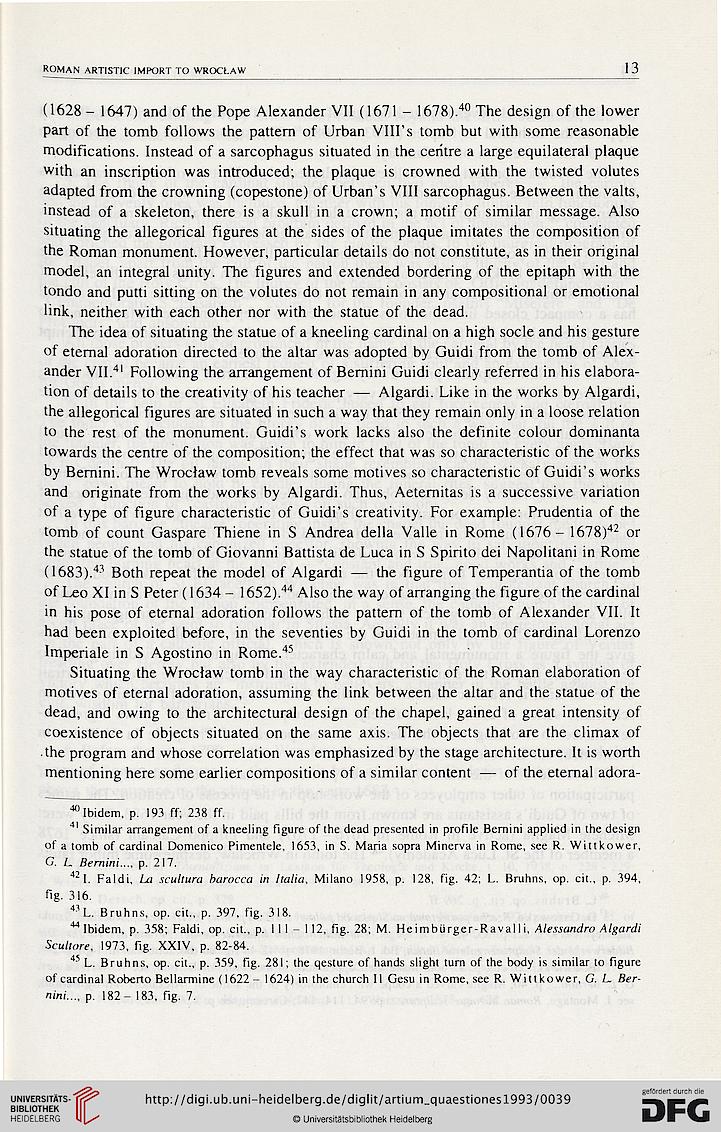 (1628 - 1647) and of the Pope Alexander VII (1671 - 1678).40 The design of the lower
part of the tomb follows the pattern of Urban VIII’s tomb but with some reasonable
modifications. Instead of a sarcophagus situated in the centre a large equilateral plaque
with an inscription was introduced; the plaque is crowned with the twisted volutes
adapted from the crowning (copestone) of Urban’s VIII sarcophagus. Between the valts,
instead of a skeleton, there is a skull in a crown; a motif of similar message. Also
situating the allegorical figures at the sides of the plaque imitates the composition of
the Roman monument. However, particular details do not constitute, as in their original
model, an integral unity. The figures and extended bordering of the epitaph with the
tondo and putti sitting on the volutes do not remain in any compositional or emotional
link, neither with each other nor with the statue of the dead.
The idea of situating the statue of a kneeling cardinal on a high socle and his gesture
of eternal adoration directed to the altar was adopted by Guidi from the tomb of Alex-
ander VII.41 Following the arrangement of Bernini Guidi clearly referred in his elabora-
tion of details to the creativity of his teacher — Algardi. Like in the works by Algardi,
the allegorical figures are situated in such a way that they remain only in a loose relation
to the rest of the monument. Guidi’s work lacks also the definite colour dominanta
towards the centre of the composition; the effect that was so characteristic of the works
by Bernini. The Wroclaw tomb reveals some motives so characteristic of Guidi’s works
and originate from the works by Algardi. Thus, Aetemitas is a successive variation
of a type of figure characteristic of Guidi’s creativity. For example; Prudentia of the
tomb of count Gaspare Thiene in S Andrea della Valle in Rome (1676- 1678)42 or
the statue of the tomb of Giovanni Battista de Luca in S Spirito dei Napolitani in Rome
( 1683).43 Both repeat the model of Algardi — the figure of Temperantia of the tomb
of Leo XI in S Peter (1634 - 1652).44 Also the way of arranging the figure of the cardinal
in his pose of eternal adoration follows the pattern of the tomb of Alexander VII. It
had been exploited before, in the seventies by Guidi in the tomb of cardinal Lorenzo
Imperiale in S Agostino in Rome.45
Situating the Wroclaw tomb in the way characteristic of the Roman elaboration of
motives of eternal adoration, assuming the link between the altar and the statue of the
dead, and owing to the architectural design of the chapel, gained a great intensity of
coexistence of objects situated on the same axis. The objects that are the climax of
• the program and whose correlation was emphasized by the stage architecture. It is worth
mentioning here some earlier compositions of a similar content — of the eternal adora-
40 Ibidem, p. 193 ff; 238 ff.
41 Similar arrangement of a kneeling figure of the dead presented in profile Bernini applied in the design
of a tomb of cardinal Domenico Pimentele, 1653, in S. Maria sopra Minerva in Rome, see R. Wittkower,
C. L, Bernini..., p. 217.
42 I. Faldi, La scultura barocca in Italia, Milano 1958, p. 128, fig. 42; L. Bruhns, op. cit., p. 394,
fig. 316.
43 L. Bruhns, op. cit., p. 397, fig. 318.
44 Ibidem, p. 358; Faldi, op. cit., p. 111-112, fig. 28; M. Heimbiirger-Ravalli, Alessandro Algardi
Scultore, 1973, fig. XXIV, p. 82-84.
45 L. Bruhns, op. cit., p. 359, fig. 281; the qesture of hands slight turn of the body is similar to figure
of cardinal Roberto Bellarmine (1622 - 1624) in the church II Gesù in Rome, see R. Wittkower, G. L Ber
nini..., p. 182- 183, fig. 7.