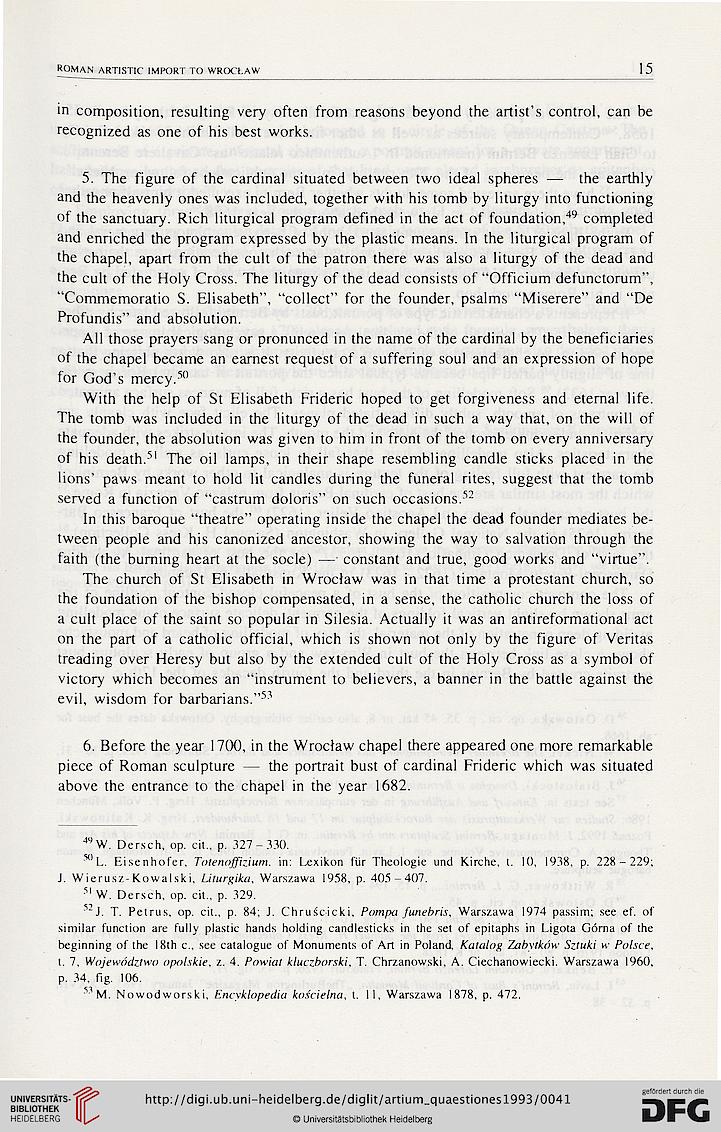 in composition, resulting very often from reasons beyond the artist’s control, can be
recognized as one of his best works.
5. The figure of the cardinal situated between two ideal spheres — the earthly
and the heavenly ones was included, together with his tomb by liturgy into functioning
of the sanctuary. Rich liturgical program defined in the act of foundation,49 completed
and enriched the program expressed by the plastic means. In the liturgical program of
the chapel, apart from the cult of the patron there was also a liturgy of the dead and
the cult of the Holy Cross. The liturgy of the dead consists of “Officium defunctorum”,
“Commemoratio S. Elisabeth”, “collect” for the founder, psalms “Miserere” and “De
Profundis” and absolution.
All those prayers sang or pronunced in the name of the cardinal by the beneficiaries
of the chapel became an earnest request of a suffering soul and an expression of hope
for God’s mercy.50
With the help of St Elisabeth Frideric hoped to get forgiveness and eternal life.
The tomb was included in the liturgy of the dead in such a way that, on the will of
the founder, the absolution was given to him in front of the tomb on every anniversary
of his death.51 The oil lamps, in their shape resembling candle sticks placed in the
lions’ paws meant to hold lit candles during the funeral rites, suggest that the tomb
served a function of “castrum doloris” on such occasions.52
In this baroque “theatre” operating inside the chapel the dead founder mediates be-
tween people and his canonized ancestor, showing the way to salvation through the
faith (the burning heart at the socle) — constant and true, good works and “virtue”.
The church of St Elisabeth in Wrocław was in that time a protestant church, so
the foundation of the bishop compensated, in a sense, the catholic church the loss of
a cult place of the saint so popular in Silesia. Actually it was an antireformational act
on the part of a catholic official, which is shown not only by the Figure of Veritas
treading over Heresy but also by the extended cult of the Holy Cross as a symbol of
victory which becomes an “instrument to believers, a banner in the battle against the
evil, wisdom for barbarians.”53
6. Before the year 1700, in the Wrocław chapel there appeared one more remarkable
piece of Roman sculpture — the portrait bust of cardinal Frideric which was situated
above the entrance to the chapel in the year 1682.