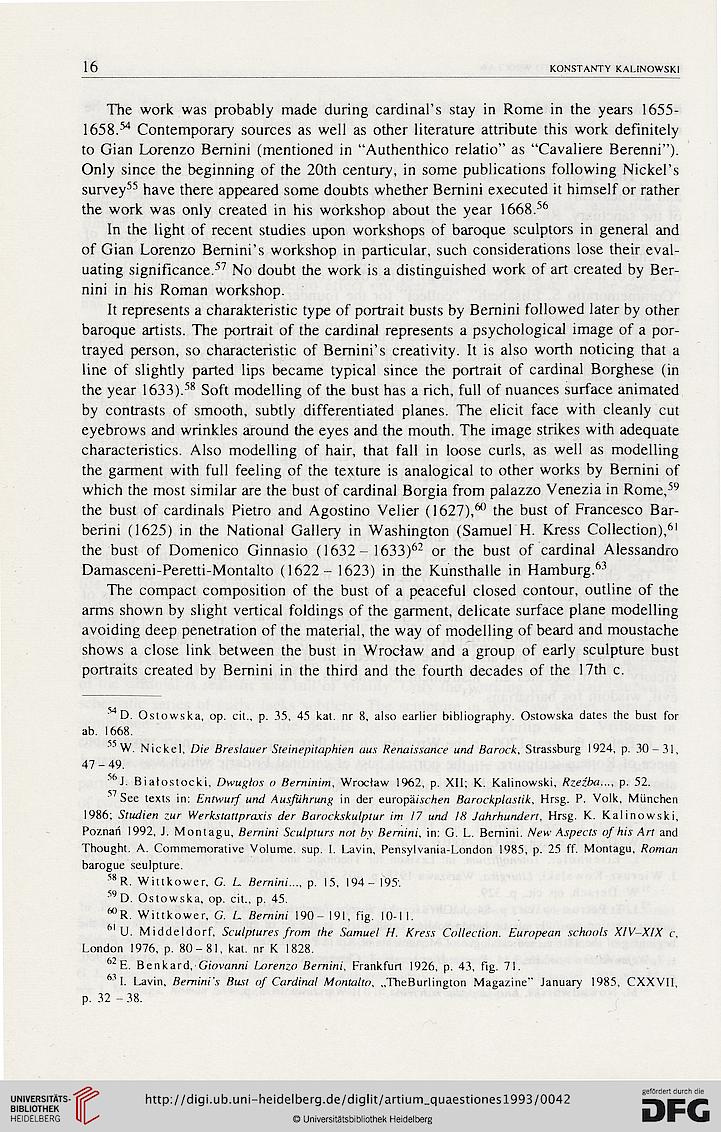 The work was probably made during cardinal’s stay in Rome in the years 1655-
1658.54 Contemporary sources as well as other literature attribute this work definitely
to Gian Lorenzo Bernini (mentioned in “Authenthico relatio” as “Cavaliere Berenni”).
Only since the beginning of the 20th century, in some publications following Nickel’s
survey55 have there appeared some doubts whether Bernini executed it himself or rather
the work was only created in his workshop about the year 1668.56
In the light of recent studies upon workshops of baroque sculptors in general and
of Gian Lorenzo Bernini’s workshop in particular, such considerations lose their eval-
uating significance.57 No doubt the work is a distinguished work of art created by Ber-
nini in his Roman workshop.
It represents a charakteristic type of portrait busts by Bernini followed later by other
baroque artists. The portrait of the cardinal represents a psychological image of a por-
trayed person, so characteristic of Bernini’s creativity. It is also worth noticing that a
line of slightly parted lips became typical since the portrait of cardinal Borghese (in
the year 1633).58 Soft modelling of the bust has a rich, full of nuances surface animated
by contrasts of smooth, subtly differentiated planes. The elicit face with cleanly cut
eyebrows and wrinkles around the eyes and the mouth. The image strikes with adequate
characteristics. Also modelling of hair, that fall in loose curls, as well as modelling
the garment with full feeling of the texture is analogical to other works by Bernini of
which the most similar are the bust of cardinal Borgia from palazzo Venezia in Rome,59
the bust of cardinals Pietro and Agostino Velier (1627),60 the bust of Francesco Bar-
berini (1625) in the National Gallery in Washington (Samuel H. Kress Collection),61
the bust of Domenico Ginnasio (1632- 1633)62 or the bust of cardinal Alessandro
Damasceni-Peretti-Montalto (1622- 1623) in the Kunsthalle in Hamburg.63
The compact composition of the bust of a peaceful closed contour, outline of the
arms shown by slight vertical foldings of the garment, delicate surface plane modelling
avoiding deep penetration of the material, the way of modelling of beard and moustache
shows a close link between the bust in Wroclaw and a group of early sculpture bust
portraits created by Bernini in the third and the fourth decades of the 17th c.