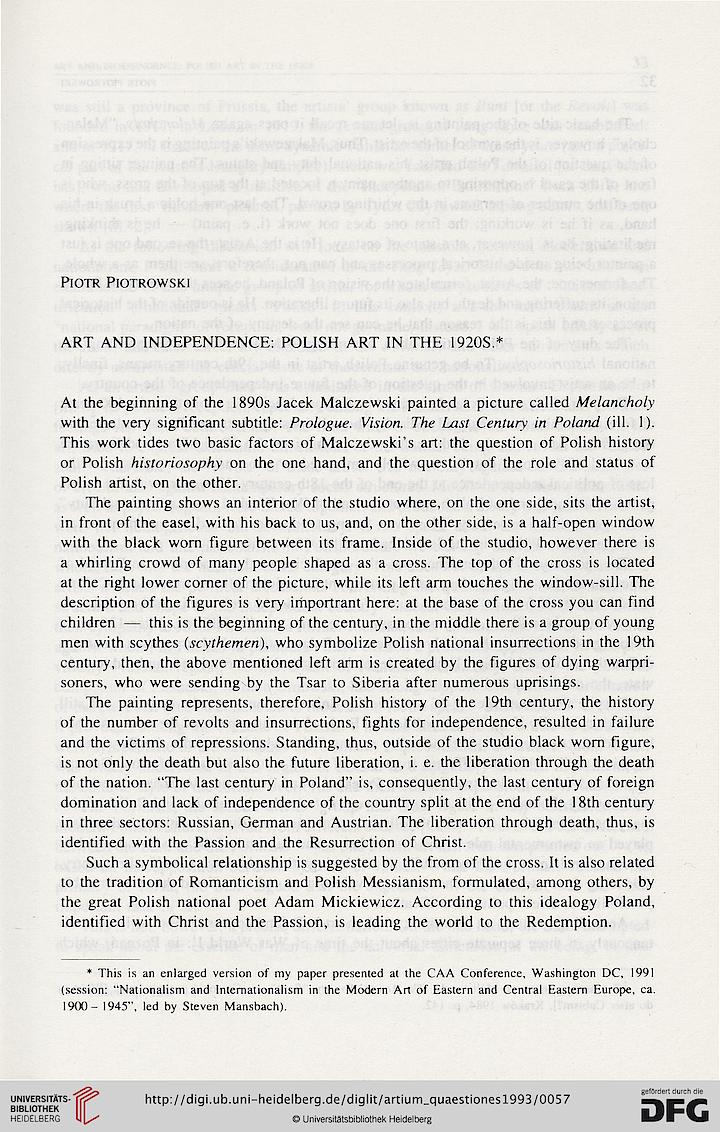 ART AND INDEPENDENCE: POLISH ART IN THE 1920S.*

At the beginning of the 1890s Jacek Malczewski painted a picture called Melancholy
with the very significant subtitle: Prologue. Vision. The Last Century in Poland (ill. 1).
This work tides two basic factors of Malczewski’s art: the question of Polish history
or Polish historiosophy on the one hand, and the question of the role and status of
Polish artist, on the other.
The painting shows an interior of the studio where, on the one side, sits the artist,
in front of the easel, with his back to us, and, on the other side, is a half-open window
with the black worn figure between its frame. Inside of the studio, however there is
a whirling crowd of many people shaped as a cross. The top of the cross is located
at the right lower comer of the picture, while its left arm touches the window-sill. The
description of the figures is very importrant here: at the base of the cross you can find
children — this is the beginning of the century, in the middle there is a group of young
men with scythes (scythemen), who symbolize Polish national insurrections in the 19th
century, then, the above mentioned left arm is created by the figures of dying warpri-
soners, who were sending by the Tsar to Siberia after numerous uprisings.
The painting represents, therefore, Polish history of the 19th century, the history
of the number of revolts and insurrections, fights for independence, resulted in failure
and the victims of repressions. Standing, thus, outside of the studio black worn figure,
is not only the death but also the future liberation, i. e. the liberation through the death
of the nation. “The last century in Poland” is, consequently, the last century of foreign
domination and lack of independence of the country split at the end of the 18th century
in three sectors: Russian, German and Austrian. The liberation through death, thus, is
identified with the Passion and the Resurrection of Christ.
Such a symbolical relationship is suggested by the from of the cross. It is also related
to the tradition of Romanticism and Polish Messianism, formulated, among others, by
the great Polish national poet Adam Mickiewicz. According to this idealogy Poland,
identified with Christ and the Passion, is leading the world to the Redemption.

* This is an enlarged version of my paper presented at the CAA Conference, Washington DC, 1991
(session: “Nationalism and Internationalism in the Modern Art of Eastern and Central Eastern Europe, ca.
1900- 1945”, led by Steven Mansbach).